Gloria “Joy” Jopson-Kintanar has blamed Sison for the murder of her husband, Romulo Kintanar, on Jan. 23, 2003. She and another widow, Veronica Tabara, filed complaints against Sison early last year that served as grounds for the arrest of the Communist Party of the Philippines (CPP) founder in the Netherlands on Tuesday. 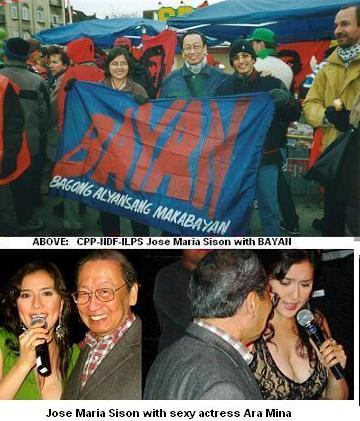 MANILA, Philippines -- The woman who blames Jose Maria “Joma” Sison for the murder of her husband hopes that the suspect is given due process.

This was part of a brief text message sent to the Philippine Daily Inquirer by the widow of one of the two rebel leaders allegedly ordered killed by Sison, founder of the Communist Party of the Philippines (CPP).

Gloria “Joy” Jopson-Kintanar has blamed Sison for the murder of her husband, Romulo Kintanar, on Jan. 23, 2003. She and another widow, Veronica Tabara, filed complaints against Sison early last year that served as grounds for the arrest of the Communist Party of the Philippines (CPP) founder in the Netherlands on Tuesday.

In another text message to the Inquirer, Kintanar confirmed that she filed the murder charges against Sison in the Netherlands. She said she would fly to that country to give her testimony “if needed.”

Sison has been living in self-exile in the Dutch city of Utrecht since 1982. He has been serving as political consultant of the CPP-led National Democratic Front in on-and-off peace talks with the Philippine government.

“For now, I can only say the following: I hope Joma is given due process, that the investigation will let the truth out, that justice be served,” Kintanar said in her message.

Romulo Kintanar, a former member of the CPP’s Central Committee and chief of its armed wing, the New People’s Army, until his arrest in 1991, was shot dead inside a Japanese restaurant in Quezon City.

Tabara’s husband Arturo, a former CPP chief in the Visayas, and son-in-law Stephen Ong were gunned down outside a mall in Quezon City on Sept. 26, 2004.

Both ex-CPP leaders had parted ways with Sison over ideological differences. The party has claimed responsibility for both killings, saying they were engaged in “criminal and counterrevolutionary activities.”

In an affidavit she filed with the Department of Justice, Kintanar said her husband’s murder was part of a “predetermined plan” by local communists “in compliance with a directive” from Sison who considered him a “threat” to the CPP and the NPA.

A senior security official said Kintanar was one of “several” people who were interviewed by a team of Dutch police and prosecutors who arrived in Manila early last year to look into the complaints she and Tabara filed.

“They talked to many people, witnesses, even Central Committee members, and they gathered documents. It has been a long process,” the official said, speaking on condition that he will not be named.

According to the official, Sison’s arrest was based on the report by the Dutch police and prosecutors that there was “probable cause” for the complaints.

But he said an “investigating judge” will have to determine whether Sison will face court trial in The Hague or in Manila.

“The Philippine government will not ask for extradition, that is the decision of the courts in The Netherlands,” he said.

The security official, who had studied the Dutch laws, said Sison’s arrest was an “exception to the nationality theory,” a legal provision that states that the Dutch courts can only hear cases against Dutch nationals or foreigners who commit crimes in the Netherlands.

“Apparently, they have a provision that allows the courts to hear cases against foreigners (living on Dutch soil) even if the crime was committed in another country,” he said.

“Our concern now is not Joma but the safety of the two widows and the other witnesses who will be coming out,” the official said.

Kintanar joined the CPP-NPA in 1977 and was assigned a research job for its Mindanao Commission. She held a position in the party’s Finance Commission until she was arrested in 1991. She was released that same year on humanitarian grounds.

In separate affidavits, the two widows said they had “personal knowledge of the system and policies” of the CPP-NPA. They said Sison was the chair of the CPP Central Committee and was using the aliases “Amado Guerrero” and “Armando Liwanag.” Sison has denied using the aliases.

Kintanar said she had “personal knowledge in the tactical operation of the CPP-NPA through its Special Operation Group and their modes of operation to eliminate/neutralize the uncooperative government officials and private individuals, including the killing of my husband who was wrongly, maliciously and unjustly judged as a counterrevolutionary.”

“My husband was one of those who questioned the assumption of Sison as the chairman of the CPP/NPA/NDF even after he left the country,” she said.

Sison, she said, was “jealous” of Kintanar who led the NPA when it reached its peak strength of 25,000 members in the late 1980s while Sison decided to stay abroad. Today the NPA has less than 7000 armed combatants throughout the country.

Tabara said Sison’s anger toward her husband stemmed from an “internal debate” on strategy and tactics within the CPP in 1992. The debates, she said, led to a split between the pro-Sison “reaffirmists” and the anti-Sison “rejectionists.”

The CPP-NPA has been waging a Maoist rebellion against the authorities in Manila since 1969. It is classified as a foreign terrorist organization by the United States and the European Union.

http://kilusan.net/lfs
Alliance for Just and Lasting Peace in the Philippines (AJLPP or Alliance Philippines -USA) statement -