To get a real grasp of just what the NWO is up to (basically eradication of up to 80% of the world's population 'by any means necessary') it is necessary to delve into the deepest horrors of psychopathy. Start here:-

http://www.pehi.eu/
Meanwhile, to neutralise their sick hold over the world it has become vital to investigate their self-admitted 'gigantic hoax' (quote: Nicky Rockefeller, Oct 2000). 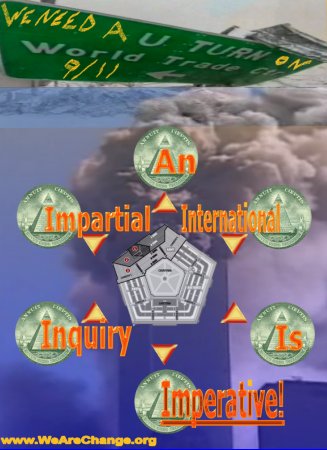 Sept. 5, 2007 – In an online editorial yesterday, Joel S. Hirschhorn, PhD, former Senior Staff Member of the Congressional Office of Technology Assessment (OTA), called for a new investigation of 9/11. “First, let the technical truth emerge. Then, if necessary, cope with the inevitable political, conspiracy and other questions. But let us not allow a possible painful truth block the primary task of determining once and for all what caused the collapse of the WTC towers and building no. 7.”

Dr. Hirschhorn is a nationally recognized engineer who has testified before Congress more than 50 times on technology, science, and environmental issues. In addition to his work for the OTA, Dr. Hirschhorn also served as Director of Environment, Energy and Natural Resources for the National Governors Association.

Dr. Hirschhorn admitted to his own personal “growing skepticism about the official WTC story”. He wrote “analyses by many experts reveal the collapse of the three WTC buildings was not caused by the two airplanes exploding into the twin towers.” He noted “the general view is that the buildings were brought down by controlled demolition.”

Dr. Hirschhorn endorsed the efforts of a new group, Architects and Engineers for 9/11 Truth, to launch a new, honest and comprehensive investigation that considers all the evidence and which examines the possibility of controlled demolition. ...

To get a real grasp of just what the NWO is up to (basically eradication of up to 80% of the world's population 'by any means necessary') it is imperative to delve into the deepest horrors of psychopathy. Start here:-

"Fog of war could explain why some people were confused on the day of 9/11, but it could not explain why all of the..investigations and public testimony by FAA and NORAD officials advanced an account of 9/11 that was untrue."