More news from Copenhagen - 69 peaceful demos totaling thousands of people, US embassy warns against activists and preparations are underway for big squatting action in October. 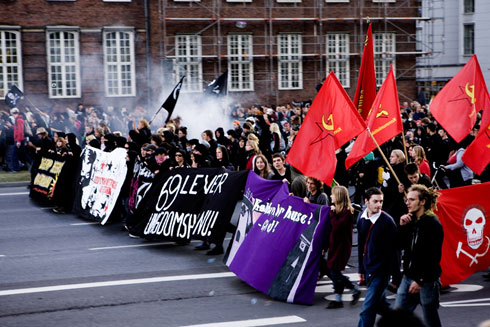 Yesterday on September 6th (6/9 - the 69th) yet another Thursday in Copenhagen without Ungdomshuset was marked. Demos took place from 69 different addresses all over the city converging on the usual starting point for the weekly Thursday demos. A few hours later the 69 had become one demo - part march part street party - moving to Town Hall Square to protest. Police said about 3000 people took part in the protest, which usually means at least half again as many were actually there.

All the protests that day took place peacefully but not all uneventfully, as a small group of unhappy citizens had taken up position along the way holding signs saying "no more sympathy" and "violence is YOUR choice". Parts of this group verbally and physically assaulted several activists, amongst others several teenage girls, but the activists did not engage the counter-demo.

Also the US embassy in an email warned all US citizens currently in Copenhagen, to steer clear of any Ungdomshus protesters they might encounter, as even peaceful protests might evolve into violent confrontations. US embassy spokesperson Tom Leary claims they were warned off by Danish government officials, but the foreign ministry denies any involvement.

All eyes are now on the G13 action, which has been scheduled for October 6th. A group of activists have abandoned the usual secrecy surrounding action planning and instead announced their intentions to squat a new house on the address Grøndalsvænge Alle 13 using non-violent but confrontational means to overcome police lines and to permanently occupy the house, which by many is seen as an ideal site for a new autonomous culture center. G13 will be hosting an action training tomorrow sunday, where activists can practice some of the techniques to be used for G13. The group explains that many of these techniques were learned during this year's G8 protests in Germany and that activists should be given the opportunity to prepare for October.