Police have put the tank and Space Hijackers' under 24 hour surveillance. 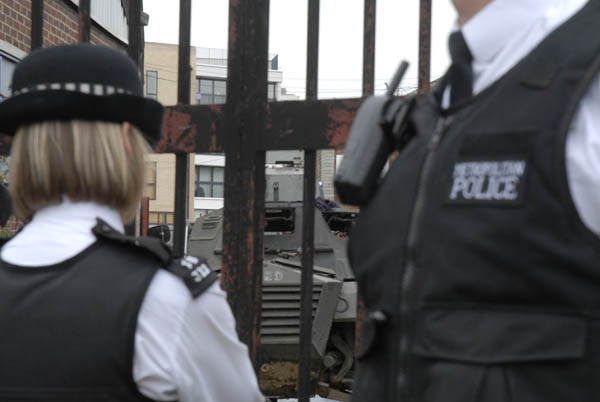 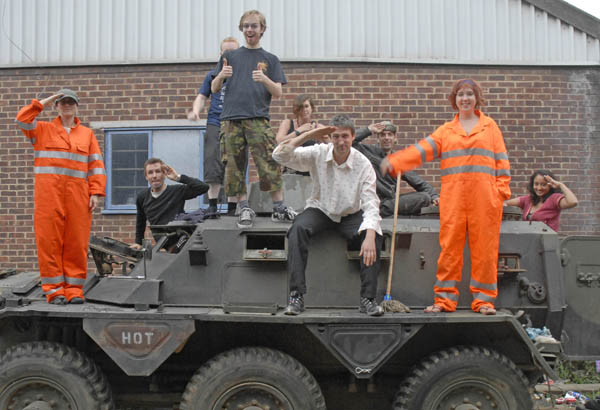 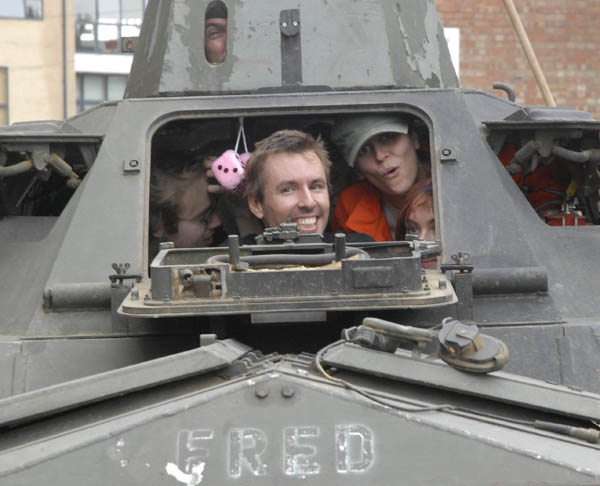 Activist group the Space Hijackers' have acquired a Saracen Mk 1 armored personal carrier which they have announced they plan to sell to the highest bidder during the Defence Systems and Equipment International arms fair, which opens in London's EXCEL centre on the 11th Sept.

They comment that the final use to which the tank will be put is not their concern. Though not official delegates at DSEI the Space Hijackers' claim to have learned the arms dealing trade from the experts, who many claim show a degree of disregard for the end use of the the products they sell. The Space Hijackers' plan to drive the vehicle to the arms fair tomorrow.

Lots of cops at DLR stations around ExCel and nearby roads today. Connaught Bridge with bollards, cops and single lane each way.

And can now have a lie in

If you began to know the effort and secrecy that's been put into this project you'd be completely surprised!

Well, for this tank thing, the justifications are so many and so obvious that it seems a waste of time bothering to list them! C'mon guys, it's not that hard! Space Hijackers could spend all day going through it in simple steps but then people would STILL slag the plan off, there'd be no secrecy, and they'd be too busy on here to get anything done... The thinking seems to be: "Let 'em get on with it. We know what we're doing and why anyway." I really do appreciate the calls on IM for clarity and justification though. Maybe that's something to be worked on.

The whole cat-and-mouse is a long story that I wish I could relate! Probably people will never hear the whole story. Suffice to say that the picture in which you can see the vehicle through the bars was taken at a time when it wasn't important to keep it hidden. And of course, there was the OTHER TANK which the police knew exactly NOTHING about.

There were some great wind-ups with FIT team-ers:
"So, looks like all the action's happening somewhere else then"..
"No, No, doesn't matter, doesn't matter" Mutters FIT team photographer..
"Must be a bit of a sickener though?"..
"Er, er, no not at all, it's covered, it's covered"He says into his chest while looking really embarassed...

On money -I'm not going to bother going into detail here, because a great side-effect of this project has been that the authorities now think there's thousands of pounds of funding pouring into activism now. Let's let them think that, hey?


Someone who's been very busy the last few days