A group of about 20 activists have entered the Excel complex where the DSEi Arms Fair is being held.
According to a phone call I received a minute ago, a few bus loads of delegates have arrived. Some of the activists who entered have been caught and are being held by security and police. 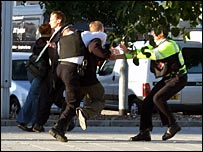 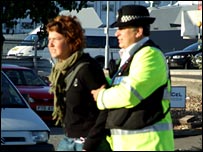 Protesters have tried to invade one of the world's largest defence fairs at London's Excel centre.

The DSEI event is a showcase for weapons systems, ranging from logistics software to tanks and rocket launchers.

Soldiers and exhibitors come not just from the UK, Germany, the US and other Nato countries, but from countries such as Libya, Russia, Saudi Arabia, Iraq, Pakistan and India.

However, as in previous years, the organisers have ordered exhibitors not to show any equipment that might be considered too offensive - such as torture devices and cluster bombs - neither as an exhibit, nor in pictures or literature.

As well as the Campaign against Arms Trade protest, other campaigners have threatened to try to disrupt the event using "direct action".

Public pressure has persuaded the company organising the show, Reed Elsevier, to sell the business by the end of the year.

Security around the London venue is tight

DSEI spokesman Al Lockwood said the sale was on track and that bids for the show were currently being assessed.

He added DSEI had a "bright future" and would be held again in September 2009 at the same venue.

"We are well aware that DSEI has its critics," Mr Lockwood said, adding that organisers had designated an area where demonstrators could protest and would be visible to visitors arriving at the exhibition.

There had been doubts about the future of the exhibition, after Prime Minister Gordon Brown decided to abolish the government's Defence Export Services Organisation (DESO), which helps to organise the show and hosts all foreign military organisations.

In another snub to the industry, the UK's defence secretary has broken with tradition and will not open this year's event.

However, the promotion of arms exports as such has not ended, with DESO's function to be moved to UK Trade and Investment department by the end of the year. 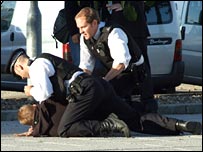 Update on the Car Park 15

Yesterday morning, people ran into the car park of the Excel Centre where delegates were making their way to buy weapons. Police pounced on the protesters, arresting 15 people. One woman sustained minor injuries and was taken to hospital before being arrested and put in custody. Some of the 15 were released early on without being charged, others were kept in custody all day. They began releasing people at 6pm last night, all were charged with aggravated trespass. They also have bail conditions which state they cannot go to Newham or anywhere near the area. They will have to appear in court soon, and may request public support. Keep an eye out on Indymedia!

DSEi invaders broke through two security cordons, and came close to reaching the Excel building in this early morning move which appeared to take police and security by surprise.

Activists breached the two manned security cordons at the East entrance to the Excel site just before eight o'clock as delegates and staff were arriving. The gates were opened to allow access to traffic, and the activists were able to simply run past the security guards.

Police had to rugby tackle protesters to the ground to prevent them reaching the East entrance and the loading bays to the rear of the building. One of the police present was heard to comment, "What happened to the security? They were crap!"

In fact the grey-suited and rather rotund figure who seemed to be in charge of security at the two gates panicked when he saw around 16 black clad figures heading towards him. He started screaming to the guards, "stop them, stop them, don't let them through!", and in his haste to get to the second inner cordon, fell flat on his arse, his clipboard and papers flying around him.

As it was, only the intervention of four vans of TSG doing hand-break turns across the car park prevented the activists reaching the Excel building. Which is not so good for a location which was supposed to be on heightened 'terrorist' alert. Heads will roll for this one.