Tuesday Martin Newell and Zelda Jeffers poured
"Rivers of Blood" onto the rampart of the DESi
Arms Fair. DESi takes place in the London Docklands,
a place that was once devasted during WWII. The Excel
Centre now hosts a 6 Billion pound a week Arms Fair
selling weapons to some of the poorest countries in
our world. 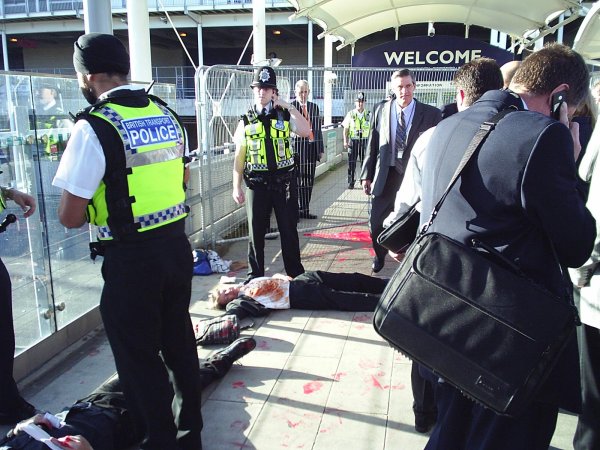 And The War Machine Rolls On

They enacted dead bodies, proclaimed and prayed with banners saying “Get the guns out of London” and “Repent: Rivers of Blood Start Here”. Large numbers of arms traders looked on as Transport Police accosted and dragged the two.

Zelda Jeffers said, “We are horrified and saddened when children and young people are gunned down on the streets of Britain. The arms used are manufactured and traded – profits are made at the cost of life and suffering. We call for this to stop. We hope for a world where all children can play safely.”

“So much blood has already been shed on September 11th: a date that means sadness and shock and horror: but that can change, if government and arms companies and dealers repent today, change their ways and begin to promote peace with as much determination as they promote war.”

The two were placed in custody by the Transport Police and are likely to be handed over to the Metropolitan Police and charged with criminal damage.

The London Catholic Worker is a part of the international, radical, pacifist, Catholic Worker movement. We offer hospitality and welcome to the poor and homeless, refugees and other migrants. At the same
time we resist the forces of injustice and violence that create so much suffering, poverty and insecurity.