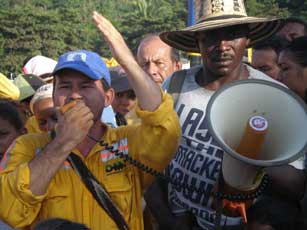 Update on the continuing struggle of farming communities forcibly displaced by a British-owned open cast coal mine in La Guajira (London-based Anglo American, BHPBilliton and Xstrata are all among the biggest and richest mining companies in the world)

Report on the international 'mining caravan' in solidarity with traditional small-scale gold miners threatened by the activities of massive multinational Anglo Gold Ashanti, 42% owned by London-based Anglo American - communities are under heavy pressure from paramilitaries and the Colombian army sent in to protect the company's interests.

Launch of new book, 'The People Behind Colombian Coal', edited by US academic Aviva Chomsky and including contributions from CSC member Richard Solly

Discussion on how to develop the CSC mining campaign, preparation for planned visit of Colombian mine workers' leader in late October, actions around the BHPBilliton Annual General Meeting on 25 October, and how YOU can get involved!