The third event in this opening week of Next To Nowhere was another great success (honestly, I would say if it wasn't; telling the truth is always a revolutionary act!). About twenty people discussed conspiracy theories - or 'alternative proposals' as I think we decided to call them - in a calm and respectful way. This was the first time I've ever seen that happen! It is possible! 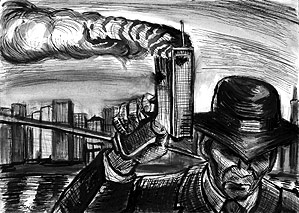 We began with a wonderfully meandering and often bizarre introduction from the facilitator, which set exactly the right tone for the talk we were about to have! We then each said how much we believed in conspiracy theories out of ten, with one being "you're all mad", and ten "woo...er...there's a robot in my pocket". I don't remember anyone saying less than three, although a couple refused to give any number, rejecting the entire premise of the question.

It soon became clear that people were most interested in the 'alternative proposals' surrounding the events of September 11th, 2001. This seemed to be because a) the people behind the Bush administration appear to have advanced their agendas using constant references to that day, and b) that many elements of the 'official conspiracy theory' don't stack up.

The conversation eventually turned to what use (if any) activist groups should make of alternative proposals. Opinion was divided on this. A few felt that they should be central to somehow 'awakening' people to a world that has been pulled over their eyes. But the majority expressed different shades of the opinion that such arguments can turn people off radical politics, marginalising us, and that political change only happens when people become conscious of their own interests. I made the point that I believed the Bush government was likely to bear some responsiblity for 9/11, but I had come to these conclusions long after becoming anti-war, anti-police state, and indeed anti-capitalist. It was therefore difficult to see how alternative proposal people could avoid preaching to the converted. However, the idea was floated that we should have individual nights where people describe their own pet consp...alternative thingies, and nobody seemed to disagree this would be a fun thing to do.

Still to come this week...

Wednesday 19th September - 7.30pm - 9pm Indymedia Info Night The Liverpool Indymedia team present films and discussion introducing Indymedia and letting you know how to get the best out of the site.

Thursday 20th September - 7.30pm - 10pm Introduction to Anarchism Merseyside Anarchist Group presents speakers and discussion on the politics and history of anarchism. With speakers from the Anarchist Federation.

Sunday 23rd September - 7pm - 11pm Free Screen - Film Night The first of our regular film nights. Showing Osama - an Afghan film about life under the Taliban and Walkout - a drama based on anti-racist school struggles in 60s LA

a massive YAY! to all who attended last night, i do not think it could have gone any better.

i've provisionally booked a couple of time-slots in october, just waitin on comfirmation,
(everyone wants to get next2nowhere! my first 2 choices are already pre-booked!)

lookin forward to goin on this journey...