In a clear example of what today's demonstration in Croydon was about, a distressed asylum seeker was arrested as protesters gathered outside Lunar House, which houses the headquarters of the Border and Immigration Agency (BIA) and its main screening unit. 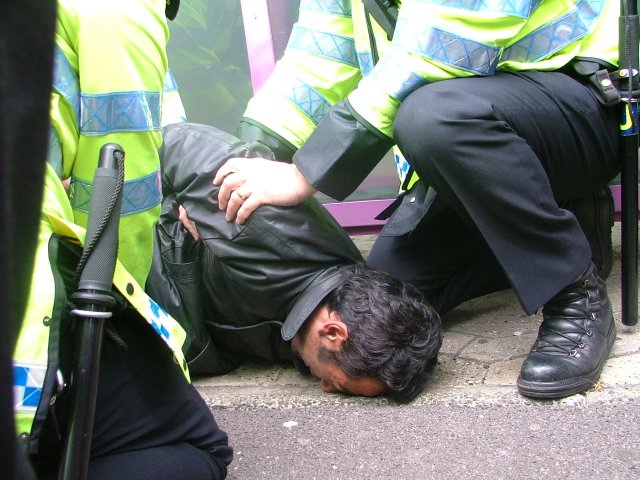 In a clear example of what today's demonstration in Croydon was about, a distressed asylum seeker was arrested as protesters gathered outside Lunar House, which houses the headquarters of the Border and Immigration Agency (BIA) and its main screening unit.

Over 200 people from the Gatwick No Border Camp gathered in East Croydon from 10am to protest against the mistreatment of refugees and asylum seekers at the hands of the UK immigration authorities. Around 11am, a man was leaving Lunar House, crying and shouting in a clearly distraught manner. Three Metropolitan Police officers (ZD20, ZD824 and ZD198) immediately grappled the man to the ground and restrained him whilst he lay face down on the concrete forecourt. He received cuts to his face as he shouted "Help me, help me! They are against poor people. This is what happens to poor people. These people are not human." He was then arrested and taken away in a waiting police van.

Observed by all present and filmed by the Press Group and the Legal Observer team, the demonstrators complained to the remaining policemen about the level of force used. They were invited by the officer in charge to go to the police station to make a formal complaint. The group then

proceeded en masse to Croydon Police Station, where the police invoked Section 14 of the Public Order Act 1986 (Imposing conditions on public assemblies) and penned the
protesters in.

On protesters commented: "The man was obviously distressed and the police and security guards, rather than defusing the situation, acted in a very violent and aggressive way. The man was
clearly in a vulnerable mental state and needed medical care, not being locked up in a cell."


Two protesters separately refused to be penned in and were subsequently arrested, handcuffed and put in cells adjacent to where the asylum seeker was held. One of the two, who was arrested under Section 5 of the Public Order Act (Harassment, alert and distress), said: "I went to complain about police heavy-handedness and immediately got assaulted by a policeman myself." "This kind of behaviour is simply pathetic; they seem determined to radicalise us," Joe Hill, added.

Sarah Bennett, a legal observer who witnessed the incident, said: "The police reaction was clearly over the top. They did not attempt mediation but, instead, used unnecessarily excessive force."

Meanwhile, another group was demonstrating at Electric House, the regional immigration reporting centre. Protesters distributed free food, gave out leaflets with legal advice and shared stories with those who are living in daily fear of being detained and deported. Demonstrators had also prepared a leaflet directed at those who work for the BIA, explaining the real effects of
the decisions they make have on migrants.

One of the demonstrators said: "A lot of the asylum seekers I talked with today had travelled from afar, having to do this weekly. I spoke to a woman who has been in England for 5 years. She had two small children with British citizenship but was living in constant fear of being deported back to her country of origin."

1. Lunar House in Croydon houses the the headquarters of the Border and Immigration Agency and its principal asylum screening unit, where people go to make an asylum application. The massive twenty-storey office block has become synonymous with the BIA and is perceived by the British public as the front line of Britain's immigration service.

2. Electric House is Croydon's regional reporting centre, where people subject to immigration controls report at given intervals (mostly weekly nowadays). When their applications have been refused, they can be detained for removal when reporting to the centre. People detained elsewhere in the region, including families 'snatched' from their homes in dawn raids, could also be brought to Electric House by the 'snatch squads', which are based at Electric House too.
All detainees (men, women and children) are held in a single holding room. The average time detainees spent at Lunar House is around four hours, but some have spent 10 hours or longer waiting to be transferred elsewhere.

3. The Gatwick Area No Border Camp is taking place between 20 and 23 September, 2007, near the village of Balcombe, West Sussex, to try and stop a new detention centre that is being built at Gatwick Airport, with planned demonstrations in Crawley, Croydon and Gatwick. The protest camp, the first of its kind in the UK, is also be an opportunity to exchange ideas and experiences, with numerous workshops, plenaries and others activities. For further details, see www.noborders.org.uk.