No Border campaigners march to Gatwick despite heavy policing

For the first time in its 11-year history, Tinsley House immigration detention centre at Gatwick Airport today saw a lively, though short rally in the afternoon. As part of the Gatwick No Border Camp, about 500 people from across the UK marched from Crawley, West Sussex, to Gatwick in a 'transnational day of action against immigration prisons'. They were protesting in particular against a new detention centre that is being built at Gatwick Airport, which is due to open in 2008. 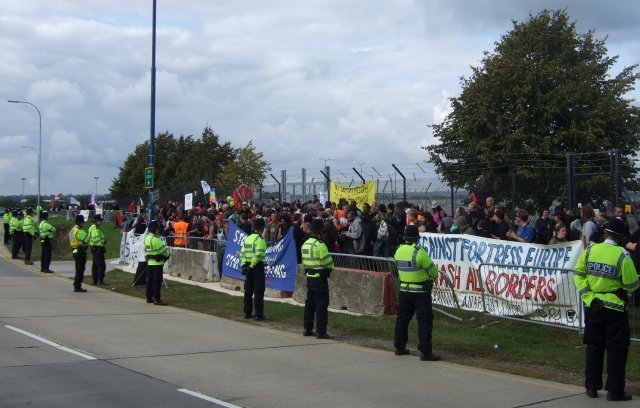 For immediate release:
No Border campaigners march to Gatwick despite heavy policing

For the first time in its 11-year history, Tinsley House immigration detention centre at Gatwick Airport today saw a lively, though short rally in the afternoon. As part of the Gatwick No Border Camp, about 500 people from across the UK marched from Crawley, West Sussex, to Gatwick in a 'transnational day of action against immigration prisons'. They were protesting in particular against a new detention centre that is being built at Gatwick Airport, which is due to open in 2008.

Armed with many banners, placards and leaflets conveying the message that immigration detention is inhumane, they demanded the closure of all immigration prisons and the abolition of the borders that cause all this suffering.

Penned in tiny, designated area along the airport's fence, protesters listened to a number of speeches from ex-detainees and messages of support and defiance. Phone calls from detainees inside Tinsley were then passed on to the crowed via a megaphone. One of the detainees, who has been in the UK for 12 years and had refugee status but is due to be deported after committing a criminal offence and serving his sentence, said: "Why should I be punished twice? I've made a mistake and I've paid for it. Why do I have to pay twice?"

Another detainee, who has been in detention for about 3.5 months and is facing deportation to Angola soon, talked about his suffering in detention and missing his family. He has been in the country for 11 years and has a British wife and three children.

During the rally, the gates were closed to detainees' visitors. Conscious of this, demonstrators sought to make the rally as short as possible in order not to prolong any further disruption to visiting. After the rally, two protesters visited one of those who had communicated with protesters and they were told that detainees were very happy and found the solidarity from people outside bars empowering.

Protest organisers said the policing of the march was "unnecessarily heavy." Two people were arrested under Section 50 of the Police Reform Act 2002 (refusing to give name and address) after being accused by police of acting in an anti-social manner. One of them, who was arrested in Crawley town centre before the march had even started, allegedly threw a rude word at a police officer. The other, who is an independent video-maker, was filming the police and allegedly 'caused distress' to a policeman who himself was filming protesters.

1. The original call-out can be found here: www.noborders.org.uk.

2. A new purpose-built immigration detention centre is planned at Gatwick Airport as part of the government's five-year strategy for asylum and immigration. The centre, to be called Brook House, is due to open in 2008. The new centre, which will have a total capacity of 426 places for male and female detainees, is being developed by BAA Lynton on behalf of the Airport Property Partnership. BAA Lynton had developed the existing centre at Gatwick, Tinsley House, in a similar way. The government has already seen the 'benefits' of locating 'removal centres' close to airports, with operations at Colnbrook and Harmondsworth, near Heathrow, and Tinsley House at Gatwick.

3. There are 10 so-called Immigration Removal Centres (IRC's) in the UK. Seven are run by private companies contracted by the Home Office's Border and Immigration Agency (previously the Immigration and Nationality Directorate), while three are run by the Prison Service. As of July 2007, these prisons have a total capacity of 2,506. However, the Labour government, which inherited 700 places when it took office in 1997, is aiming for a total of 4,000 places. In addition, there are many so-called Short-term Holding Facilities at many ports and airports throughout the country as well as at a number of Immigration Reporting Centres.

4. As of 31 March 2007, 1,435 people who had sought asylum at some stage were being detained in the UK solely under Immigration Act powers. This accounted for 70% of all detainees and excludes people detained in police cells and prison establishments.

5. The Gatwick No Border Camp will take place between 19 and 24 September, 2007, near Gatwick, to try and stop the new detention centre, with planned demonstrations in Crawley, Croydon and at Tinsley House. The camp, the first of its kind in the UK, will also be an opportunity to exchange ideas and experiences, with numerous workshops, panels and other activities. See www.noborders.org.uk for further details.

5. The worldwide No Border network has previously organised similar camps over the last 9 years, including those in Tijuana (Mexico), Genova (Italy), Woomera (Australia), Frankfurt (Germany) and recently Transcarpathia (Ukraine). Each camp often focuses on a specific issue but is ultimately campaigning against borders and for the freedom of movement for all people.

6. Previous migration-related international days of action include one on 7 October, 2006, and two European Days of Action on 31 January, 2004, and 2 April, 2005. See www.noborder.org for details.

7. No Borders UK is network of groups and activists across the country who stand against all visible and invisible borders and migration controls and struggle for the freedom of movement for all people. There are currently 8 such groups in Birmingham, Brighton, Glasgow, Leeds, London, Nottingham, Sheffield and Wales. The first UK-wide No Borders gathering was held on 11-12 March, 2006, in London. The global No Border network had existed since 1999. The first ever No Border meeting was held in Amsterdam in December 1999, following the European Summit in Tampere in October that year, when coordinated actions and demonstrations took place in eight European countries.