Progress in Iraq: up to 80 US dead/month and rising 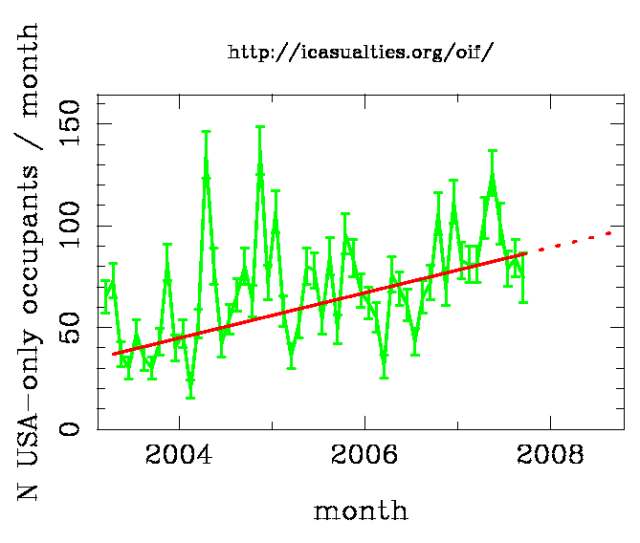 A linear fit to the rate of killing US occupants in Iraq per month since May 2003 (excluding the initial invasion in March and April 2003), using the statistics compiled at

http://en.wikipedia.org/wiki/Operation_Phantom_Fury ) and following the 2004 US presidential presidential election (

http://en.wikipedia.org/wiki/2004_U.S._presidential_election_controversy_and_irregularities ) which could be expected to give an average rate roughly constant or decreasing. However, despite these 2004 high peaks, the linear regression fit over the past 54 months gives a positive growth rate.

The number N of US state terrorists killed per month can be estimated as:

This fit makes no assumptions about political changes in the US such as the "surge" or withdrawal of the "surge": this fit averages over all 54 months from May 2003 to September 2007.

The prediction for the average number of US state terrorists (so-called "our troops") killed per month by the end of 2008 is:

Progress? Yes, but not quite in the way "General Betray Us" stated it.

Thanks for the maths lesson

What is the point of this language "state terrorists", what is this article trying to achieve? There is an ever-growing 'troops out' movement in US of people that value their troops.

".....that value their troops?
fuck you idioti

troops are part of the crumbling old order

terrorists -
they are getting killed

against government and all its control agencies

BAGHDAD, Sept 22 (Reuters) - A case of cholera has been confirmed in southern Iraq, a senior health official said on Saturday, raising fears the virulent water-borne disease is spreading through the country.

The vast majority of Iraq's 1,500 cases are in the north but cholera has been confirmed in Baghdad this week and now near Basra in the south.

Health Ministry Inspector-General Adil Muhsin told Reuters the latest case was a 7-month-old girl from Mudeyna, near Basra, who contracted the disease from drinking water.

Cholera, mainly transmitted through contaminated water and food, can cause death within hours from dehydration and kidney failure.

The U.N.'s World Health Organisation this week confirmed the first case of cholera in Baghdad, a 25-year-old woman.

Ill-equipped medical facilities and hospitals will hamper efforts to rein in the outbreak around Kirkuk in the north, which the WHO describes as an epidemic.

About 75 percent of people infected with cholera do not develop any symptoms but the pathogens stay in their faeces for up to two weeks.

"What is the point of this language "state terrorists", what is this article trying to achieve? There is an ever-growing 'troops out' movement in US of people that value their troops."

The article documents the fact that not only the total number of US state terrorists killed in Iraq is growing, but the *rate* of killing them is, on average, steadily continuing to grow. Both Iraqi citizens and US citizens (and sort-of-bystanders such as people in the UK) have a right to know this: that's what the article is trying to achieve - the right to know.

Maybe what you are trying to say is that we should hide the fact that "our troops" are state terrorists in order to persuade more US citizens that the US should withdraw from Iraq.

Sometimes it's worth it to omit some facts for tactical reasons, that's true, though it should really only be done very exceptionally.

On the other hand, it would be disrespectful to the terrorists and their families to call them "troops" instead of terrorists. Can't we respect their honesty and basic humanity - are they really unable to be honest about what they're doing in Iraq?

Do you really think the state of fear that Iraqis are living under is not "terror"? One out of every five Iraqi families (households) has lost one or more of its members by violent death due to the invasion and occupation (

http://www.opinion.co.uk/Newsroom_details.aspx?NewsId=78 ). US soldiers and mercenaries gun down families at the drop of a hat, the US has trained Shi'ite death squads, now the US is training Sunni death squads, hundreds of Iraqi academics have been assassinated with no apparent motive other than a systematic attempt to decimate the Iraqi intellectual community, helicopters are used to kill blood and flesh living people as if they are just bytes of RAM in a video game. If that's not terror, then what is?


As for realpolitik, the best "withdrawal" strategy that any of the "Democratic Party" presidential candidates are proposing (except possibly for Kucinich) is to reduce *combat* troops within a few years and play a "Korea option", where US troops will continue to do their best to crush local attempts at democracy, train death squads, support the most authoritarian/corporate-friendly local leaders and force neighbouring regions to remain in a permanent state of potential war for the next 50 years. If veterans' and military families' groups start insisting that US state terror is OK except when "it fails", we're not going to have much progress in reversing US barbarism.

Do you really think we should deny the terrorists' ability to be honest about their role in the hope that the US occupation of Iraq in 2057 will be somewhat on the sidelines but still showing no sign of ending?

call a spade a spade