Yesterday Pauline Campbell was found not guilty of blocking the highway at North Avon magistrates court. The trial followed an incident at the prisons gates on January 24th this year. Pauline had been arrested at the same prison (HMP Eastwood Park) the previous October. She was released without charge. See:

This time the Police had clearly had enough and were determined to get a conviction. In January Pauline was protesting at the death of Caroline Powell a mother of five who had been found dead in her cell. When Pauline did her usual action of blocking the Prison van trying to enter it took the local Police nearly an hour and a half to show up. When they arrived they came prepared with 3 vehicles 6 officers and an evidence gathering cameraman. It was very clear that this time they intended to get a conviction.

Sadly for the cops they could not be bothered (amongst other things) to check the local boundaries, i.e. where the highway finished and the crown property started. They also did not endear themselves to the court by changing the charge against Pauline midway through the process. Her acquittal is a victory for prisoner rights campaigners everywhere.

The photos below have not been published until now for legal reasons. 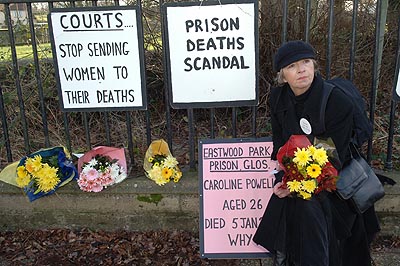 Another death provokes another demo by Pauline Campbell. 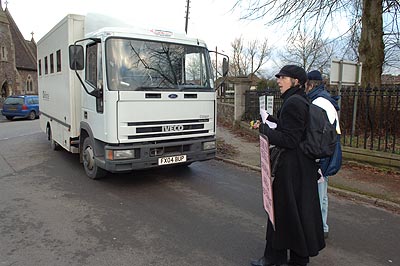 A prison van is blocked... 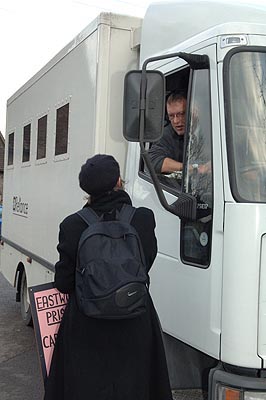 ...on the grounds that this is not a safe place to bring a woman prisoner. 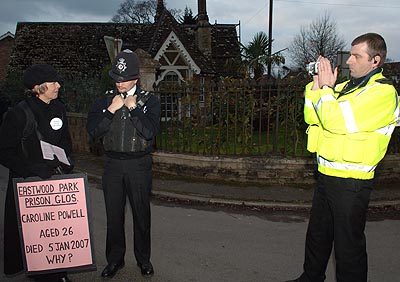 The cops show up in force with a camera team. 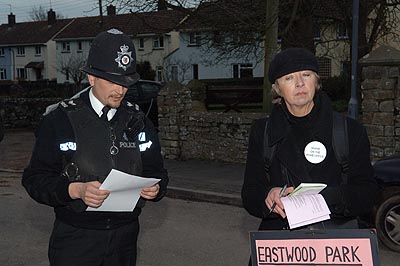 Pauline struggles to stay awake as the law is read to her. 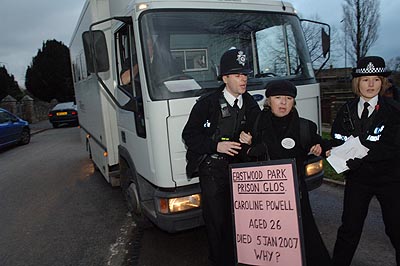 She is then removed from the path of the prison van... 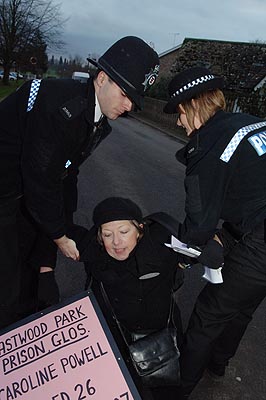 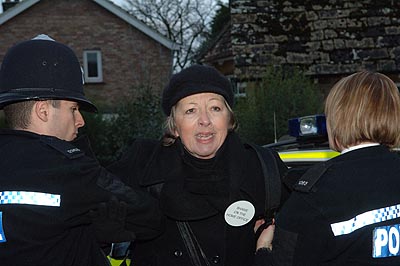 She continues to remind the officers of the plight of women prisoners... 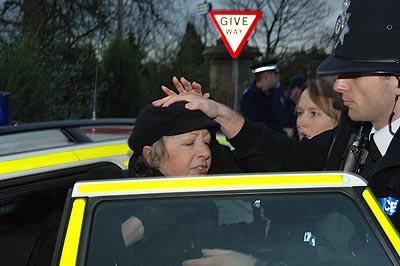 ...when she is finally put into the transport, to be taken away and charged.

(1) The alleged wrong occurred outside HMP & YOI Eastwood Park on 24 January 2007, at a prison-death demonstration to protest against the death of mother-of-five Caroline Powell, 26, who died in the 'care' of the jail on 5 January 2007. Ms Powell was on remand, and therefore legally innocent, when she died.

(2) Today's trial finished at around 5.30 pm, and was attended by representatives from the 'No More Prison' group; Crossroads Women's Centre, London; and other supporters. A demonstration was also held outside the court building, commencing at 9.30 am.

"The case was dismissed. District Judge David Parsons said I went to protest and expressed my genuinely held concerns about the deaths of women in custody, and he said: 'I have been told that you are in the vanguard of public opinion, seeking to bring about change.'

"The District Judge was satisfied that I did not have any intention to obstruct the highway. And I didn't.

"Caroline Powell's grieving parents were shocked that I was facing a criminal trial for protesting against the death of their daughter but, when I spoke to them by telephone after today's hearing, they were pleased the case had been dismissed.

"This is a victory for common sense, and justice has been seen to be done. However, it is a matter of great injustice that thirty-nine women prisoners have died from apparently self-inflicted injuries since my daughter's death in 2003. Some moral leadership from within Labour's ranks is badly needed in order to deal with the scandal of women dying at the hands of the State.

"I am grateful to Mr Peter Thornton QC for representing me pro-bono, and to Hickman and Rose (Mr Noam Almaz) for stepping in to provide pro-bono assistance in the days leading up to the trial. Legal aid had been denied." [Pauline Campbell]