Some pictures from yesterdays lunchtime demo. Mostly Burmese dissidents, many of them survivors of the last massacre 19 years ago. 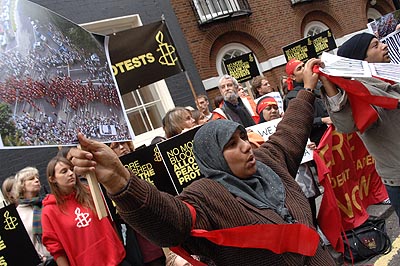 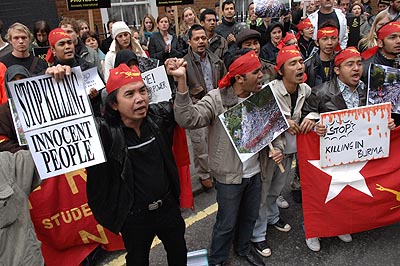 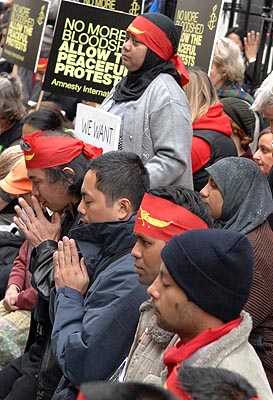 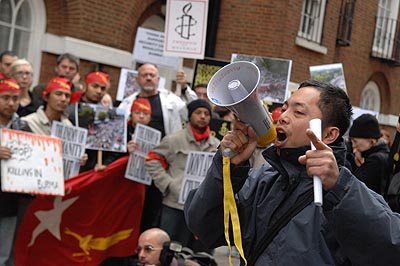 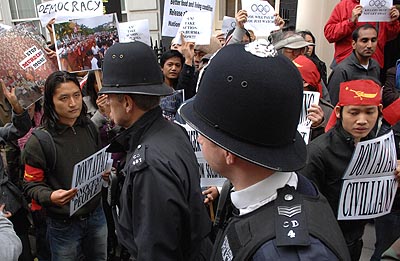 Today Gordon Blair announced that he fears many more are dead than the 9 reported by the Burmese Junta controlled media. This means he knows damn well from the intelligence that he is party to that another massacre is happening as we speak...

Burmese people we are with you

I wish to express my support and love for the people of Burma at this time. Just because our government is paralysed by political fear doesn't mean that the common people aren't with you.

I wish I could do more, I am heartbroken for you brave people, unarmed and murdered by overgrown bullies with guns.
Where will it all end?

Prayer to end the junta

Many thousands of people are praying for the end of this brutal regime. May God be with these poor people and help them get free.

“The overwhelmingly greatest enemy of Myanmar is not any regime, past or present, but US and Western European imperialism, and those attached to it.”

Why the sudden interest in Burma?

For the Decisive Victory of Myanmar against Imperialism

Stop the New york money peoples war on China and Chinas weapons of mass production
US Industry/Think Tank blue print and talking points for the war on china.

Burmese FM blames 'opportunists'
He said "neo-colonialism has reared its ugly head" by trying to spread disinformation about human rights
abuses in Burma. "The situation would not have deteriorated had the initial protest of a small group of activists against
the rise in fuel prices had not been exploited by political opportunists," he said.

"They sought to turn the situation into a political showdown aided and abetted by some powerful countries.


"One of the first and best known cyber campaigns confronting the Rangoon government is Burmanet, an e-mail service that distributes news about the country. A mainstay for activists and journalists covering the country, Burmanet is sponsored in part by the financier George Soros.... Collecting information about human rights abuses and delivering them to Internet-enabled offices along the Thai border is now one of the group's priority operations."


Junta , Thugs or Soros: The Soros Threat To Democracy


What the "Junta" wants: His Excellency U Nyan Win Minister for Foreign Affairs of the Union of Myanmar