International day of solidarity with Jose and Gabriel

Graffitti on Aachen Way in Halifax (twin town of Aachen)


In prison, time is desire. It is a waiting. A waiting for something that breaks through the waiting. It is waiting for life. Something that makes you feel. Something that might inspire you. Something that takes you a step further in spite of the dragging routine, in spite of the dead environment. It is a waiting and a looking for a confirmation of being human, there where prison tries to destroy you, tries to subjugate you... tries to resocialize you. It's there where you feel their lies and hypocrisy cutting through your impotence. It's there where the curtain of the spectacle falls and the truncheon becomes tangible. The truncheon we all know but do not always see or want to see.


Already, more than 20 years, Jose and Gabriel stand face to face with this violence and now already more than 3 years in Germany. It's now almost 2 years ago that the sentences of respectively, 14 and 13 years, were declared. Long sentences for an escape from yet more imprisonment by briefly taking hostages during a confrontation with the police. Both escaped a couple of months before after an imprisonment of 20 years in the gulag of the Spanish state. Both wanted to be free and finally continue the struggle outside that they have been fighting inside. Both stayed true to the anarchist struggle and its principles in spite of years of being locked up in the infamous FIES isolation regime and for that they have to pay with more prison, now in Germany.


Of course the judges didn't listen to their past, they only used it as an argument against them. They were convicted because they are anarchists and we can't forget that.


In the meantime they're under a regime of permanent control. Jose already went through 4 prisons and often has to undergo restrictive measures. After a series of conflicts with the prison authorities, for 4 months, he can only get visits behind glass. This was originally supposed to be for 3 months, after they found him with cannabis after a visit. Recently though, this turned into a permanent 'security measure'. Jose refuses to accept visits behind glass. Judicial steps were taken against this measure but these can drag on for a while. Gabriels situation is similar. He describes his regime as '...similar to FIES (and in some perspectives even worse).'


We call for an international mobilisation in solidarity with Jose and Gabriel and with all prisoners in struggle. The 29th of September there are demonstrations planned at the prisons of Rheinbach and Aachen in Germany (more information later). We call on everyone to be present, but it's the decision of the comrades in the street to express their solidarity as they see fit. We can't forget our prisoners. We can have our differences but should never forget what we stand for. Against seclusion and exclusion. For international solidarity.


More info about the trial, FIES, etc can be found on: 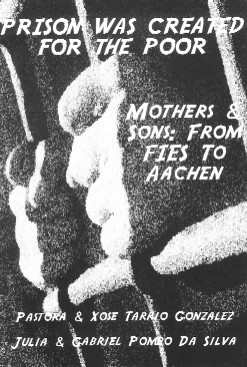 
Prison Was Created For The Poor focuses on two tireless militants of the Spanish prison struggle, Xose Tarrio Gonzalez and Gabriel Pombo Da Silva, who fought against the brutal F.I.E.S. isolation units. Xose was killed by a life behind bars, and Gabriel now rots in a German prison. The main part of this book though, is written by neither Xose nor Gabriel, instead it is the text of an interview with their mothers, Pastora and Julia. Through this medium, they tell a powerful and emotional story, which not only takes us inside the world of Spanish high security prisons, but reflects on jails throughout the world. Prison Was Created For The Poor is a compelling read.