SOCPA - parliament square has been liberated

activists got to work earlier today on the two-metre fencing all around parliament square. the grass is now liberated, open to the public, and to the burmese protestors. police so far have not intervened in the operation which was carried out by around a dozen activists.
earlier today, activists from various groups worked together to begin dismantling the two-metre fences that have surrounded parliament square since early august when a team from the greater london authority (GLA) were aided by police in a raid on the square (

at the time of the original raid, the GLA claimed that the reason for the operation was to clear the square of an illegal encampment and to stop the problem of anti-social behaviour by some of the campers. they then said the fences would remain while the square was prepared for the unveiling of the mandela statue at the end of august (

but after mandela left, the fences stayed up.

the GLA then stated that they were there while work was carried out on the lawn and flower beds and for preparations for a statue of lloyd george.

several attempts to get further information from the GLA have been met by silence.

while the grass remains cordoned, there is very little room for legitimate protest outside government, and indeed burmese protestors this week were not only threatened under socpa legislation but also warned they were obstructing the pavement.

http://publish.indymedia.org.uk/en/2007/09/382316.html). this, if true, would be unconstitutional and would be unlawful under the human rights act.

it is not proven whether the fencing is connected with further restrictions on protest or with the government's obsession to get rid of brian haw and other peace campaigners on its doorstep, but with the murky behaviour of the GLA, a connection certainly cannot be ruled out.

for the moment at least, a brave group of concerned citizens has taken our right of freedom into their own hands, and parliament square is once more open to the public and to peaceful protestors.

the campaign group 'peopleincommon' were planning a picnic in victoria tower gardens tomorrow afternoon, but are now hoping they can take up their rightful position in the square.
www.peopleincommon.org

the activists have removed all the fencing at the back of the square and all along the westminster abbey side. they have also removed the fences behind the peace encampment. however, for safety reasons they have left some fence up around an area the GLA is preparing for a lloyd george statue, and they have also decided to leave up quite a lot of the fence opposite parliament as it's a great place to hang banners safely.

although not as pretty, idiosyncratic, or artistic as brian's original protest site, the fencing provides a safe, secure and somewhat larger area to hang banners than brian ever had!

during the afternoon, families have been once again enjoying the square in the sunshine and children have been cartwheeling on the grass.

a woman from the GLA made a brief visit but beat a hasty retreat.

there are currently just a few police keeping an eye on the continuous burmese protest that has formed there.

I would also imagine that because there is a march for Burma assembling at Trafalgar Square at 11:30 that a few may go there first and then be ready to move to arrive at the picnic venue for round about 1:00pm. Weather permitting of course! 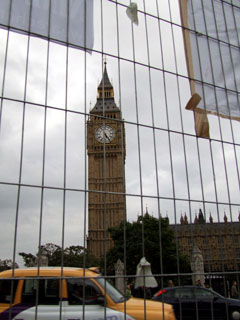 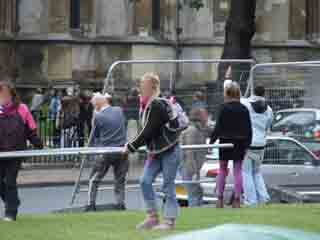 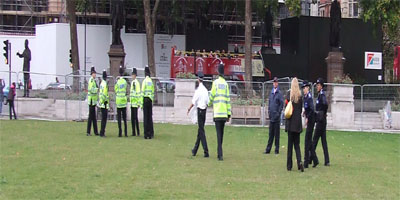 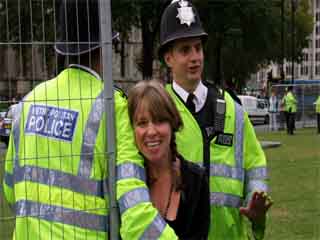 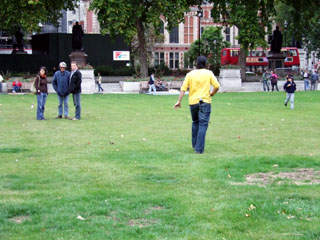 It was a spectacular and spontaneous event. The fence was taken down sensibly and stacked into neat piles. The police came along and monitored the liberation for a while. They talked to people but did not physically stop them from removing the whole of the rear and south side of the fence. In fact, I wasn't sure if I was dreaming, that the police weren't storming in and arresting people. So the conclusion was happy, the grassy area is once again open to the public, the area being worked on is still fenced off and no-one was arrested. If only the police were this level headed at all peaceful protests.