around a thousand people met in trafalgar square this morning, and at midday they set off on a march down whitehall, passing downing street and parliament square, and on through victoria to battersea park and the peace pagoda 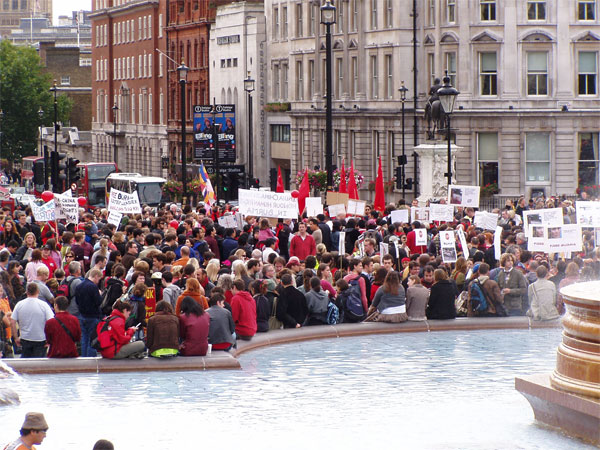 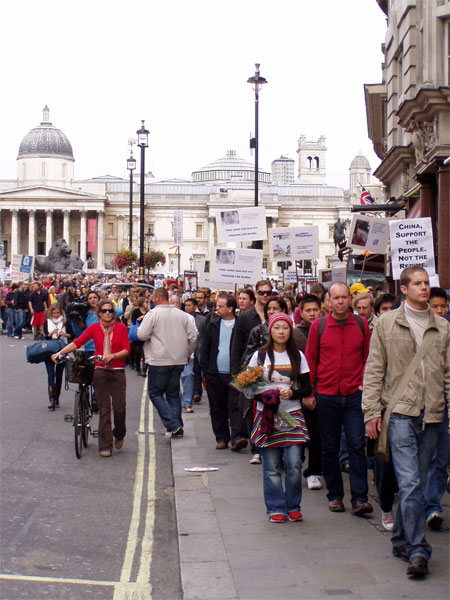 the start of the march along whitehall 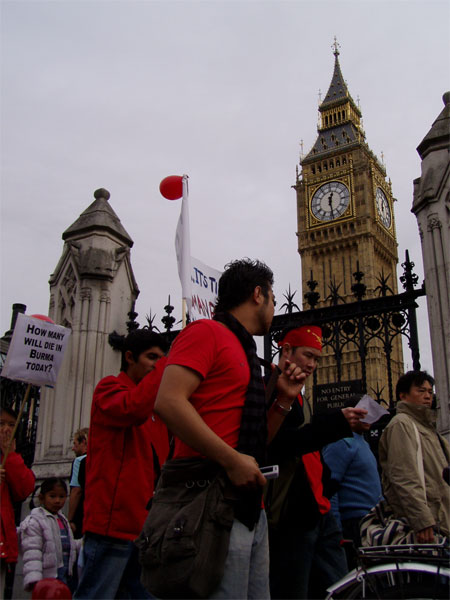 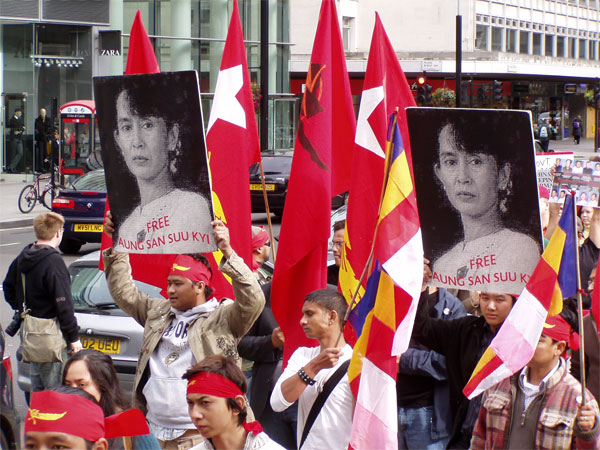 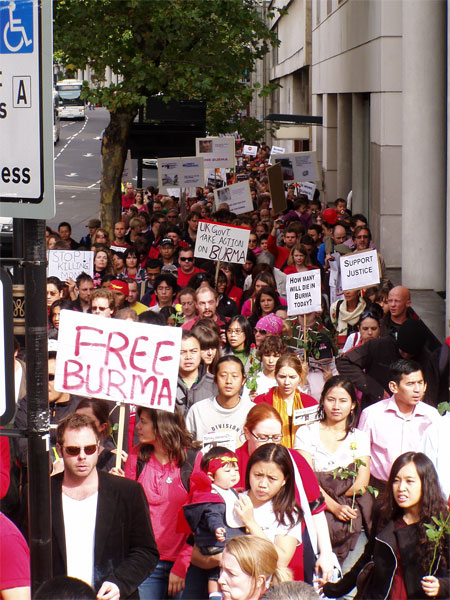 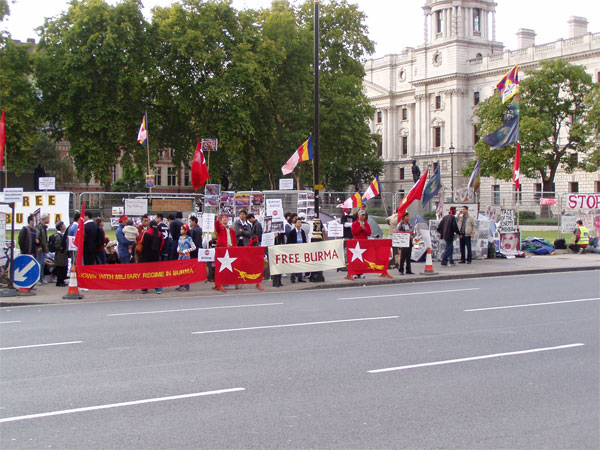 the march had been self-organised on the facebook internet site and no-one had sought authorisation from the police. considering that the march crossed the socpa zone and involved so many people, the policing was unfathomably low-key with just one car assigned to the first part of the route and no police at all for much of it.

without wishing to cause offence, i feel like demanding equal rights with burmese protestors (in this country obviously)! this is what freedom could look like, and contrasts sharply with the hounding of peaceful anti-war protestors in parliament square documented at length on indymedia. it clearly showed how repression or tolerance is controlled in london on the basis of political whim, and drives a huge hole through the 'security concerns' supposedly behind the SOCPA law governing protest near parliament.

the marchers mainly comprised burmese exiles, some monks, and students, although there was quite a cross-section of people there as well. the small but noisy samba band, 'rhythms of resistance', were welcomed by the burmese and about half way along the route, they were asked to come to the front to help lead the procession.

the only sour brush with officialdom occurred as the protest arrived at battersea park. there, some over-enthusiastic parks 'police' demanded that all the banners were left at the park gates so as not to transgress bye-laws. they also banned any mainstream media from filming in the park. the peaceful crowd complied and gathered round the pagoda to offer prayers for the people of burma.

i don't know whether this was the first facebook-organised protest, but it was probably the biggest, and shows yet another powerful way in which people can self-organise and work together.

there is a constant presence in parliament square for now, and there are daily protests at lunchtime at the burmese embassy.

next week, parliament resumes on monday, and the 'stop the war coalition' is planning a march to parliament square (although at present it seems there may be a ban on this), there will also be a burmese protest that day, and 'justice not vengeance' are also holding a commemoration of the start of the afghanistan invasion.

It's no good moaning about the situation of the military run state in burma when the UK is just as bad. At the moment we're in a police state where our liberties HAVE been taken away from us - no privacy as if asked by the police you have to give your encryption passwords or face 2 yrs in prison, ISPs and phone companies now have to keep phone and internet logs BY LAW for a year so that they canbe monitored, and soon to be brought in is that every website visited by uk citizens is recorded and checked by the government.

It's no good sitting around in social centres drinking tea and chatting about climate change, animal liberation etc when we've been stripped of our human rights, which we need to fight these various issues.

We all need to stand as one and fight this fascist police state, no matter what cause we're from.

Not QUITE as bad mate!

What a fucking ludicrous statement! Of course all government is evil, and by its nature it represses, but it is an insult to those dying and resisting in Burma to say that we have it as bad. Sure, we get beaten and nicked, and our demos get marginalised by the pigs, but we DO NOT get shot. We have indymedia and various other things that would be shut down in seconds in Burma. Im not an apologist for the British state, im just making a point.
The mere fact that those protesting in London yesterday were not shot out of hand is tesament to the fact that the Burmese regime is more brutal than the British at the moment. But still, fuck all government, and fuck all cops!

"it clearly showed how repression or tolerance is controlled in london on the basis of political whim, and drives a huge hole through the 'security concerns' supposedly behind the SOCPA law governing protest near parliament."

I think 'controlled' is the operative word here in relation to tolerance. Thanks for the report but it should mention that it was only allowed on the pavement when marches from the more 'official' protest organisations like Stop the War are allowed to march down the road. Also I would have thought this would be covered by the Public Order act as a 'procession' and excluded under section 132 (3)(a) & (b) of SOCPA.