A night of live music, dj's and plenty of dancing to raise funds for Palestinian women's groups and international activist legal fees.

The Plough, Kilburn Street, Easton
8pm til real late - £4/£3 donation on the door 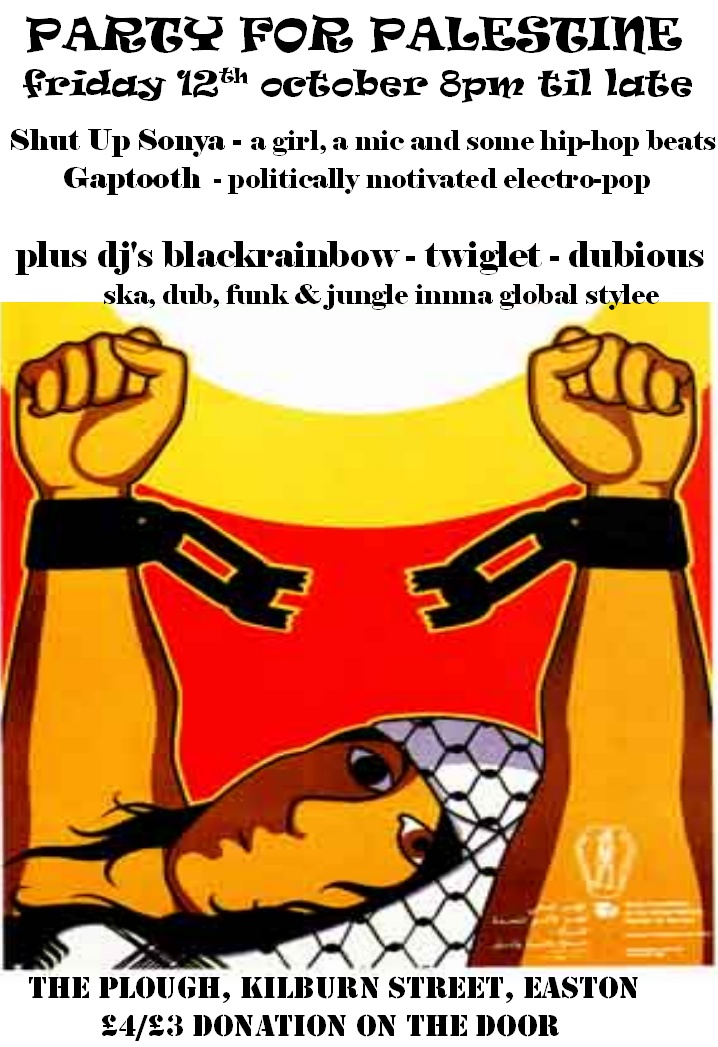 Live music from Gaptooth (politically motivated electro-pop) & Shut up Sonya (a girl, a mic and some hip-hop beats)

Plus DJ's Blackrainbow, Twiglet and Dubious mixing up the genres and the continents with a selection of ska, funk, dub and jungle in a global stylee

Raising funds for:
WOMEN FOR LIFE - a grassroots women's organisation in the West Bank working to empower women in order to become self-sufficient and to resist the occupation.

Interview with a Women for Life organiser:
"I am from 1948 Palestine but was born in Gaza. I am a social worker and activist. My work as a woman fighting against the occupation began in Gaza during the first intifada. With the Union of Palestinian women, I set up four kindergartens which looked after children in the morning, and were the meeting place for women in the afternoon. Every afternoon we studied the history of Palestine and planned demonstrations. Eventually each kindergarten was shut down by the soldiers.

I moved to the Jerusalem area and worked in the refugee camp of Shufat. The Israeli army had flooded the refugee camps and the Old City of Jerusalem with drugs and my work was to rehabilitate drug addicts. I was part of a group called Communists against Drugs. Women were again very active. We had women's cultural groups in Beit Sahour arranging dancing and workshops against the occupation. During this time, the Israeli Occupation Forces killed three Palestinians in prison and so 200 of us women slept in the graveyard for seven days as a protest. I worked with a newspaper as a journalist until it was shut down by the occupation, so I went to work with the blind.

My husband's brother was killed by the Israeli army and there was nobody to look after his children so we moved to the small village of Qarawat Bani Hassan in the West Bank. I lost my job but I started working with the women in the villages on agricultural and sewing projects and we opened the first kindergarten in the village.

After this I worked in villages all over the West Bank, encouraging women to build democratic women's committees, remove roadblocks, hold demonstrations and boycott Israeli goods. The women were highly mobilised in some villages and even decided to pressure for a woman Mayor.

I got a job as a union organiser in the Working Women's Union, fighting for less working hours and higher pay for women secretaries and machinists in clothing factories. But I lost this job after many factories closed down because of checkpoints, roadblocks and the occupation. I then worked with the mothers of children and children who had pyschological problems from the occupation.

The problem today is that it is necessary for women to work against the occupation but some men still say it is better for women to remain in the house. Yet women want to be united to fight the occupation, whereas the men are not united in their political groups.

We need to organise a proper boycott of Israeli products, and to encourage women to be self-sufficient. This is difficult because our land is very rocky and in order to cultivate it we need bulldozers and good equipment. So you find that poor people don't work on the land, and some of them are even forced to work in settlements or building the Apartheid Wall. My idea is to work on the land and stay on the land. Holding a boycott and demonstrations and working on our land are the best form of non violent resistance. Many women know about these ideas and we are all supporting each other."

LEGAL FEES - International street medics recently returned from solidarity work in the West Bank and Israel were deported for taking action against the occupation and have outstanding costs from resisting the legal/illegal actions of the Israeli government.