Oaxaca Benefit Shut Down by the Police

A benefit gig and party put on by the Sheffield Anarchist Federation to raise money for Oaxacan autonomous organisations was raided and closed down by the police on Saturday 29th September.

"From 3:00 til about 8:30 everything was going well. Plenty of people had turned up, we had raised quite a bit of money and people were generally having a good time... At around nine, the police turned up. At first, we were only met with a couple of bobbies on the beat. They told us to turn the music down and that they didn't want to have to come back to tell us again. We complied with this order. A short while later they returned, this time they cited breach of the peace and noise complaints from local residents. At this point we were given no legal warning and shown no noise abatement order... At this point TSG arrived. The officer arriving on the scene demanded two spokespeople from the organisers to negotiate a de-escualtion of the situation. Two spokespeople were mandated and let outside of the property. The negotiation was a complete farce. The officer had no interest in an open dialogue, he ordered that the soundsystem be removed from the premises within ten minutes and when the spokespeople refused to give out their personal details repeatedly threatened them with arrest." See the full report for more details and photos. 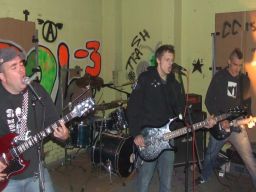