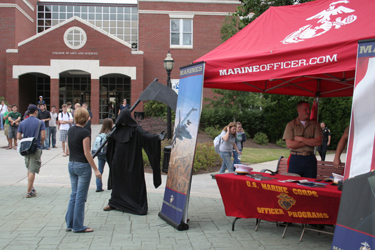 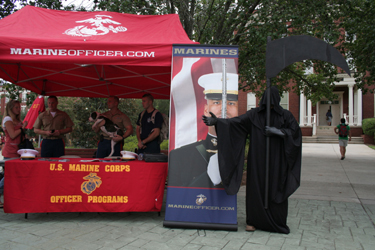 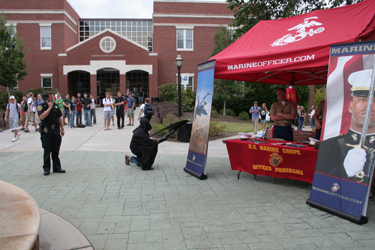 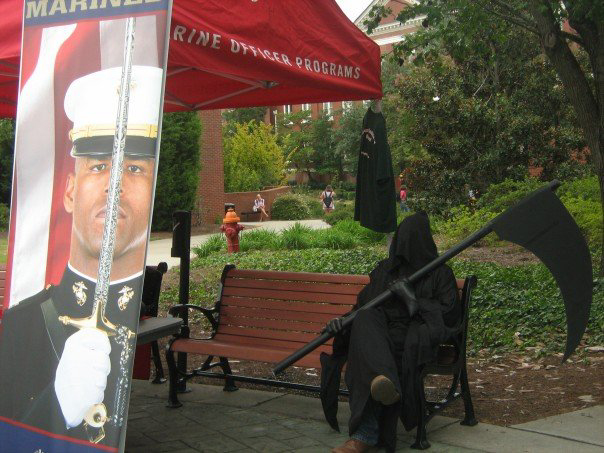 Walking past the buildings of GCSU on an overcast, cool morning, the last Thursday in September, a Marine Recruitment booth was spotted near "the Fountain," a common meeting area and major campus thoroughfare located between Arts & Sciences, Russell Library, and the International Education Center of Georgia College & State University. Within two hours a cloak was donated, a scythe fabricated and the Grim Reaper began a conversation with the young recruiter.

Marine Recruiter: "I wish my buddies were here."

GR: "I do not question your heroism. You have made a great sacrifice for our nation, you have given yourself for a purpose greater than yourself. You are an American Hero."

GR: "The architects of this illegal and immoral war in Iraq are responsible for the rapes, mutilations, dehumanization and deaths of tens of thousands of men, women and children...Iraqis, coalition forces, and American servicemen and servicewomen. The Administration in Washington has summoned me. That is why I am here today. That is who I am here for."

As a crowd gathered, a few students wandered close to him and said "fuck you." More offered support and encouragement. Pairs of laughing students asked if they could take pictures, flanking him and waving towards their friends' cell phone cameras. Someone offered a quiet, lingering hug. An older student, a veteran, asked to hold the scythe in solidarity, and in protest. Other students began to ask why this reaper was here, and quietly discuss the war with him. A young man was heard saying "It's un-American! Those soldiers are fighting and dying so he can stand there and do that!"

The Reaper thought "they are not dying for my right to free speech, if that's what he means by 'do that.' I feel no threat by Al-Qaeda to my right to be here, peaceably, passively. I am much more threatened by the hostility I hear in your voice, and from the policeman eyeing me as he circles in closer. But if these Marines are sacrificing themselves for my right to stand here, then it is my responsibility to honor them by standing here."

The motivation for this action came from the profound sadness felt at seeing a Marine Recruitment booth in the middle of our campus on an otherwise pleasant day in September. Legally, I suppose we have no choice, but it seems antithetical to the stated mission of the university, and to all we, as an institution, are praised for among our communities. Though one could argue they are simply providing our students with more options for their future, a recruiter's primary goal is to remove the student as soon as possible from this campus, or soon after graduation through the use of monetary incentives, tales of exotic travel and adventure, promises of future education and appeals to one's sense of patriotism.

I was also interested in the lack of attention the booth was drawing. In the time I spent there in the morning before the performance, I saw a few students talking to the recruiters, but most paid no more attention to them than to the other student-run booths nearby. I found their presence there to be a shocking reminder of the thousands of people, Iraqi's, Americans, completely innocent children, being utterly destroyed, emotionally and physically, by a war for oil and strategic positioning in the Middle East. These thoughts led me to want to call attention to the recruiters' presence, with the hope that somebody might think about war...this war, all wars, and the carnage and death they require. Some wars may be necessary or just, but this "front line in the War on Terror" is a disgrace to us all. The function of this action was to encourage thought and discussion on the nature of war, on our general complacency, and on our ability to speak up and out if we want to. The recruiters themselves and others that volunteer their service to our country were not the subject of the protest or of the critique.

I have heard from several sources (GCSU faculty, staff and students) that it is rumored that the Reaper was a student, a former student, a local unassociated with the university, a professor, etc. There is great benefit in these rumors, because it might occur to anyone hearing them that they too could participate in peaceful actions of resistance or support of things they care about, regardless of their "station," background, or position.