Though the latest round of official strikes sanctioned by the Communication Workers Union came to an end at 03:00 this morning, many postal workers are defying their leaders, and are staying out. 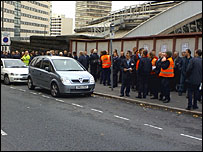 In Liverpool, the unofficial stoppages started at district offices, and spread to the main sorting office at Copperas Hill. Locally, there were similar scenes reported in West Lancashire and Wirral, as well as London and Glasgow.

Workers coming off strike were hit with the news that Royal Mail is forcing through changes to working practices without agreement, preventing posties from starting work before 0600 BST and leaving before 1415 BST, even if they have completed their rounds.

"The current Royal Mail management introduced this concept of flexibility when they were appointed," complained David Wall, a worker at the Walton office.

"Now, they are taking it away, claiming it is because they need to modernise and save money, yet there is no sign that their bonuses have been cut."

The wildcat strikes show that posties are refusing to be pushed around by either the fat cat Royal Mail bosses or the bureaucrats who run the CWU.

The union's general secretary Billy Hayes accepts privatisation, supports New Labour, and is refusing to unite postal workers from around Europe, all of whom face similar 'modernisation'. By wildcatting today, posties are taking some of their power out of this parasite's hands.