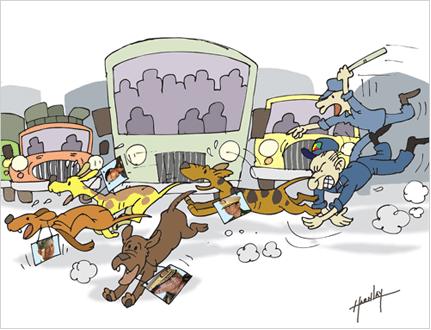 The Burmese authorities have a new enemy to hunt down—dogs which are roaming Rangoon with pictures of Than Shwe and other regime leaders around their necks.

A resident of Shwegondine, Bahan Township, told The Irrawaddy on Friday that she saw a group of four dogs with pictures of the regime’s top generals around their necks.

Some sources said the canine protest had started at least a week ago, and was keeping the authorities busy trying to catch the offending dogs. “They seem quite good at avoiding arrest,” laughed one resident.

Associating anybody with a dog is a very serious insult in Burma.

Spray-painters are also at work, daubing trains with the words “Killer Than Shwe” and other slogans.