Britain has declared that spybase NSA Menwith Hill can be used as part of the American Missile Defense system. "Drum Them Out!" - was the recent demonstration to protest this and indeed the whole system of American bases in the UK and their total lack of accountability. 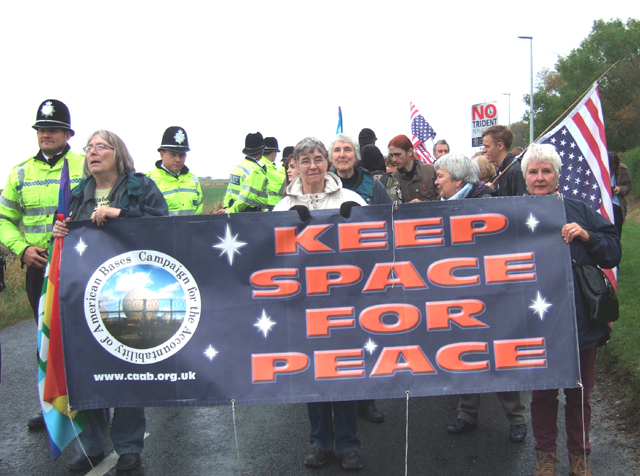 This demonstration was part of a week of international protest called for by the Global Network Against Nuclear Weapons and Power in Space - KEEP SPACE FOR PEACE - the specific theme at the American base at Menwith Hill was: DRUM THEM OUT!

The day before this latest demonstration, two North Yorkshire Police (NYP) officers came to Christopher and Lindis Percy's house in Harrogate and issued a section 12 notice (Public Order Act 1986) which put police conditions on the demonstration.

We were prevented from walking round the base (as we have done for many years) because the police said it was 'too dangerous and would cause serious disruption to the local community'. We would not be allowed to walk on the A59 road, one of the perimeter roads round Menwith Hill. The same notice had been also unexpectedly served on those who came to the 4 July demonstration (Independence FROM America).

CAAB contacted Liberty (guardians of our civil liberties) after the demonstration in July, as we felt this was another erosion of civil liberties. They took up the matter with North Yorkshire police legal department. There have been several letters to and fro, setting out the legal position and emphasising to the police that we have the right to demonstrate. It is also the duty of the police to uphold and enable the demonstration.

It was quite clear, however, that the police would impose this notice after a meeting between CAAB and NYP during the week. It was very disappointing that the police took this rigid line as CAAB has always carefully liaised with NYP and our relationship with the police has been good up until now.

It was within this restriction, therefore, that we gathered at the main entrance to Menwith Hill. There was a heavy police presence including police horses, police on cycles and motor cycles; with van loads of police waiting in the background and on the approach roads. Inside the base there were many Ministry of Defence Police Agency officers; some on quad bikes, and every gateway to the base covered.

About 100 people gathered outside the main entrance to Menwith Hill. Look North TV and Radio York were there. The theme was 'DRUM THEM OUT'. Music was provided by radical DJ Steve Morris in his usual radical and entertaining way. The arrival of Manchester Samba Band emphasized the theme of the demonstration!

Garth Frankland (Alliance for Green Socialism) welcomed everyone and introduced the speakers. Jean Lambert (London MEP and Green Party) spoke about the outrage of the Missile Defense system. She spoke about the lack of democracy and accountability overall: focussing our attention on Des Brown, Secretary of State for Defence’s announcement that the UK Government had given formal consent to the US Government to use Menwith Hill in the Missile Defense system.

This system is unproven; is causing a new arms race. It is upsetting countries like Russia, the Czech Republic and Poland, Jean declared. She emphasized the comparison between the amount of resources spent on this dangerous weapons system in space, and the money that should be spent on providing basic human needs round the world.

Hilary Wainwright (Editor Red Pepper) spoke next about the fact that the right wing press omitted to mention the handing over of sovereignty of the so called RAF bases to the US Government, but seems to concentrate on the ‘sovereignty’ given away to Europe. She urged people to take the issue of Missile Defense out onto the streets. She also voiced concern that the demonstration was tightly controlled, and that we were increasingly penned in (true!). She lamented and was somewhat outraged that once again the UK Government had 'buried bad news' by the announcement by Des Brown in July - just before Parliament went into the summer recess.

During the break and throughout the day delicious food was provided by Rhubarb Tartlets from Sheffield.

We set off on the walk round the base stopping at various points, where Lindis Percy (CAAB) and Martin Deane (Hull Green Party) gave some history and information about the base and Missile Defense. We were accompanied by the energetic Manchester Samba band.

However, when the demonstration was some way from the A59 road, we were stopped by the police and prevented from going any further. Some people sat down while we tried to negotiate with the police to go on, as the conditions of the notice did not include this road. We were allowed to go a short distance before Inspector David Hannan imposed further conditions. The police said that arrests would follow if anyone sat down; refused to move; or went any further. Despite trying to negotiate with the police, it became clear that the police cordon would not move.

When CAAB debriefed NYP we pointed out that it was the police not the demonstrators who caused the 'serious disruption to the community' by blocking the road and not allowing us to demonstrate. We said that had the police allowed us to continue with the walk round the base, safely walking on the ample grass verge and in single file, there would have been very little disruption. The action taken by the police was unnecessary, unreasonable; it certainly did not fulfill their duty to uphold and enable protest; a fundamental right based in law. It is regrettable that because of the attitude and stance of the police that day and on 4 July our relationships with them have been somewhat scarred. We will be discussing what happened with the lawyers at Liberty.

PLEASE NOTE:
We will be planning the next major demonstration at Menwith Hill which will be held on Friday 4 July 2008 (Independence FROM America). Please put this in your next year's diary!

There is a weekly demosntration on Tuesday evening at the main entrance to Menwith Hill (6-8 pm). We are now into our seventh year of witness.