The Holy Land Foundation was the largest Islamic charity in the nation. Its trial has serious repercussions for domestic issues, such as the right to face one's accusers in court and domestic wiretapping, as well as international concerns, like Palestine and the so-called "War on Terror." Cut through the propaganda and get informed. 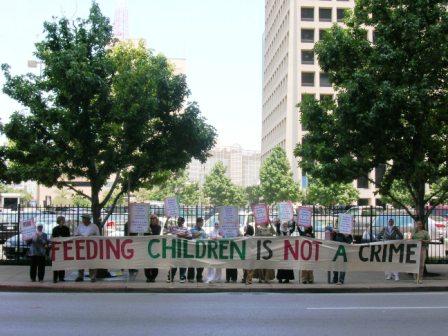 Daily vigil was held across the street from the courthouse every day. 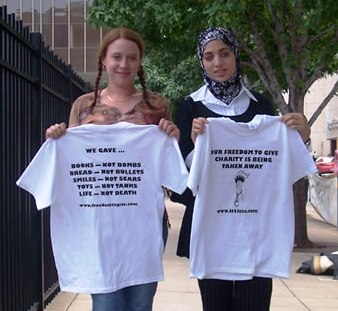 We live on a rotating orb floating through space.

Buried deep within this sphere of rock, water and atmosphere are natural resources called fossil fuels.

The rapidly expanding human population wants these dwindling resources in order to sustain its vision of civilization (ignoring the massive systemic damage it causes to the revolving ball, in the meantime).

The United States, as the self-designated global leader of nations, wants to control these resources (oil in the Middle East, natural gas in Central Asia) in order to maintain its economic and military hegemony.

However, there’s been one main obstacle to this plan: the resources are in ‘their’ land, not ‘ours.’ In order to access the precious resources, the American government must demonize ‘them’ so that the American citizens will support invading, bombing and stealing from ‘them.’

Who are ‘they’? Well, ‘they’ used to be the Ottoman Empire. (Remember the Crusades?) And, well, ‘they’ are mostly, but not exclusively, Muslim.

How is all this related to Holy Land Foundation, the largest U.S. Islamic charity, and its current legal battle in Dallas? Well, it will take a little bit of patience, but after this brief historical abstract, we’ll find our way to connecting the dots. Keep in mind that the HLF’s actual act under indictment is helping the Palestinian people.

You see, Israel is really just a Euro-American foothold in the region, meant to extend the Western sphere of influence. Palestine had most recently been part of the Ottoman Empire since the 1500s before coming into British control around 1917. (The land had changed hands continually throughout the millennia, coming into Judaic control initially in the 11th century BCE.)

Jewish resettlement of the area began as early as the 12th century CE. The first major wave of modern immigration, the First Aliyah, began in 1881. As Russian anti-Semites stepped up their persecution of Jews, many flocked to the British Mandate of Palestine during the Second Aliyah, from 1904 to 1914 [

http://en.wikipedia.org/wiki/Israel#History]. These immigration waves continued even to present day [

Just as the British colonizers were set to voluntarily withdraw in 1948, the state of Israel declared itself independent, gobbling up surrounding Arab territories beyond its U.N. recognized borders in the process. The Zionist Israeli Jews (none of the three terms mean the same thing) claimed to have a theological right to the land as prophesied in the Torah and the Bible. Surrounding Arab states retaliated against the incursion militarily.

Many evangelical Christians, found politically in the Republican Party, support the Zionist agenda of keeping the Holy Land in Jewish control today. The GOP exploits this theological sentiment to further its own political agenda in the region.

From the Palestinian point of view, just on the eve of their independence, literally, the Israelis replaced the British as their oppressors. This set the stage for the much later First Intifada, 1987-1993. Palestinians endured the humiliation and tragedy of collective punishment under military occupation [

http://www.ifamericansknew.org/cur_sit/] for a full 40 years before retaliating as a community. Tactics ranged from non-violent demonstrations and boycotts to the use of Molotov cocktails and stone throwing.

The United States has supported the Israeli agenda to occupy Palestine with money and military might from the beginning, through the American Zionist Committee, which later became American Israel Public Affairs Committee (AIPAC). It is therefore in America’s ‘best interest’ to portray the oppressed Palestinians as violent, fanatical terrorists, in order to maintain public support for its alliance with Israel.

In order to do this effectively, the government has long supported a PR campaign that stereotypes Arabs and Muslims as dangerous to Americans. The American media’s tendency to portray Arabs and Muslims as terrorists began long before 9/11. (See the Governator in True Lies [

In order to pursue its agenda, the Bush administration manipulated the tragic events on Sept. 11, 2001 and began military operations in Afghanistan, a predominantly Muslim nation and a strategic component of Unocal’s efforts to secure a natural gas pipeline [

http://www.ntimc.org/newswire.php?story_id=5691&print_page=true]. President Bush himself claimed that this operation was part of the domestic front of the “war on terror.” The Holy Land Foundation gave humanitarian aid to projects throughout the world, but focused most of its resources on families suffering in Palestine.

Even as early as February 2002, the Bush administration was already hinting at war with Iraq. But an Israeli defense official commented that Iran was more worrisome than Iraq, due to Iran’s potential nuclear capabilities. (Never mind that Israel has failed to sign the Nuclear Non-proliferation Treaty and has its own hefty nuclear arsenal, thanks to US). In exchange for their support during the invasion and occupation of Iraq, though, the American government is now acquiescing to the Israeli agenda.

In May 2002, a hasty, one-sided administrative hearing determined that Holy Land Foundation should be designated as terrorist. The Supreme Court refused to hear the group’s appeal to change the decision.

The government then used manipulative propaganda to rally the American people to support its war in Iraq in 2003. We have yet to leave that country, in spite of the lack of WMDs and Saddam’s execution, because ‘we’ want to secure American interests in their oil industry.

In Spring 2004, almost three years after freezing the charity’s assets, the U.S. Department of Justice indicted the Holy Land Foundation for providing material support to a U.S.-designated terrorist group, HAMAS. The government amended the indictment in 2005, changing the allegation that they funneled money to HAMAS. The new version stated that by providing humanitarian support to suffering Palestinians, HLF was indirectly allowing HAMAS to spend their resources on other projects, such as military operations.

The government brought two anonymous Israeli agents (an unprecedented move in the American system of Justice), two FBI agents and a well-known Zionist sympathizer, Dr. Matthew Levitt, who works for pro-Israel think tank The Washington Institute on Near East Policy. Carting piles of wiretaps that are only admissible thanks to the PATRIOT Act, the government instead concentrated on playing irrelevant HAMAS propaganda tapes to drum up fear in the jurors.

The Holy Land Foundation’s biggest ‘crime’ was humanizing Palestinians. Their aid went to helping the very people who Israel is trying to eradicate. If the American public began to understand what was happening in Palestine, with the checkpoints, executions, arrests and home demolitions, it would threaten the American perception of Israel, and therefore our relationship with them as well.

Given that Israel is the largest foreign recipient of U.S. aid, receiving almost $3 billion per year, it is unlikely that any American Zionist wants the “fifty-first state’s” skeletons to come out of the closet. Even Israel actively censors its own news to keep Israelis from hitting the streets in outrage.

The government’s main argument in the HLF case was that the zakat (charity) committees that HLF worked with were linked to HAMAS. The federal prosecutor’s strongest evidence to support this came from the Israeli government, not our own. The anonymous agents turned over stacks of undated, unverifiable HAMAS propaganda, such as posters and key chains. These were supposedly confiscated at some of the listed zakat committees from 2002 on. (Note: HLF was indicted for transactions that occurred between 1997 and 2001, putting this evidence out of the relevant range.)

However, as defense lawyers pointed out, this would be the same as finding some Democrat-related material in a board member’s office at a corporation. This does not prove that the board is Democrat or that the corporation is controlled by Democrats. Individual members of organizations are entitled to their personal beliefs, but they do not reflect on the organization as a whole.

In fact, all of the zakat committees listed in the indictment are today open and operational. None are listed as terrorist. All have been licensed by the Fatah-led government (HAMAS’ opposition party) and still receive money from USAID. Why, then, has HLF alone been persecuted (and prosecuted)?

As stated earlier, HLF was humanizing the Palestinian plight and educating the public about the conflict. Also, when Bush announced that these philanthropic men (who led the group) were terrorists, he perpetuated the myth that Muslims have a special inclination towards terrorism. This fuelled fear and distrust in non-Muslim Americans while simultaneously snowballing support for Bush’s future militaristic endeavors.

The closure of HLF had other more sinister effects as well. Because of the trial and the publication of the so-called unindicted co-conspirators list (which has more than 300 individuals and organizations listed), all mainstream Muslim groups are surrounded by a cloud of suspicion. They must fuel their resources into constantly defending themselves, instead of operating on behalf of the Muslim community.

Even ordinary Muslims are now afraid to give zakat (charity), which is one of the five essential pillars of Islam, because they fear the FBI will be knocking on their door next. Zakat committees have operated in Palestine for decades and sometimes centuries under various different governments. Like domestic non-profits, they are non-partisan by design, so that they can effectively deliver aid where it is most needed, without strings attached.

This case gives the international Muslim community the impression that America is really putting Islam, the religion, on trial. This blatant disregard of cultural context fuels the very anti-American extremism ‘we’ claim to want to dissipate. The jury is still out deliberating, and a guilty verdict could further damage America’s already tarnished international image.

Although the “war on terror” was purported to keep Americans safe, the tactics actually serve to boost terrorist recruitment. But Bush & Co. don’t really care, because it just makes their job of demonizing the Other that much easier. You can’t have a perpetual war if you don’t have a growing enemy contingency, after all.

As the military’s crosshairs loom in on Iran, it is essential for the American public to remember our original spirit. We must maintain a critical, questioning stance as the federal government continues to spin us into their power-hungry web of disinformation. Perhaps it is finally time for US to put global humanitarian interests ahead of U.S. (and Israeli) economic interests.
Must-See Videos – Pass them around!!!

Standing in Solidarity: A Snapshot of the daily vigil,

Faces of the Holy Land Foundation Trial: Spend time with the families of the defendants,

Here’s the websites that are sponsoring the campaign to support the HLF defendants:

And don’t forget to check out the blogs, which have almost daily updates on the trial:

The Enemy Shall Not Outwit Him,

Beth Freed is the communications coordinator for the Hungry for Justice coalition, a network of national and local civil rights advocates. Please email her at