“This is the most heavy handed policing we’ve seen outside this factory in over two years. EDO have used Sussex police as their rottweilers before and their efforts have ended in failure and humiliation for the company. This is a desperate act by a failing company. The community has shown time and again that this aggression will not silence us. We will continue to protest against EDO until it has been shut down.” - Sarah Johnson, spokesperson for Smash EDO 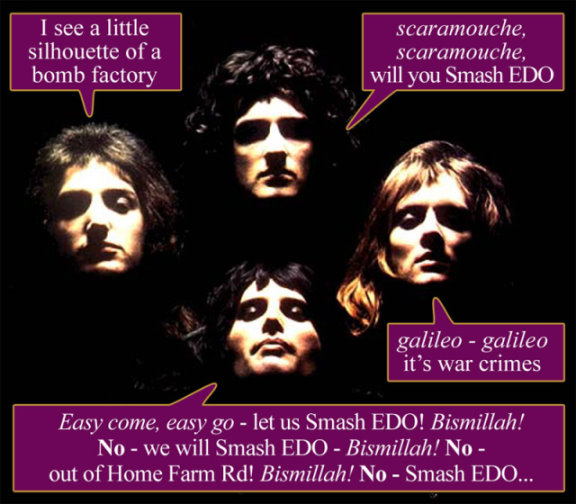 It’s been quite an exciting couple of weeks up on Home Farm Rd, Brighton. The campaign Smash EDO have been pulling out the stops, and Sussex Police - for their part - have been clutching at straws with equal grit and determination. It seems that the cops have finally woken up after the humiliation of the failed injunction against Smash EDO and are now trying to botch together a de-facto injunction through the selective application of local bye-laws and ancient statutes. The past two weeks has seen the highest numbers of arrests since the collapse of the injunction in February 2006.

Last week an early-morning action and some strategic application of super-glue saw Managing Director Paul Hills having to smash a window of the company premises so he could get to work (see SchNEWS 605). A person filming the action had their camera confiscated under a highly dodgy interpretation of the Police and Criminal Evidence Act.

But in a more onimous sign of legal battles to come, five were arrested that day, mostly for aggravated trespass and obstructing police, but all have now had their charges altered to ‘Conspiracy to Cause Criminal Damage’ – a much more serious offence which carries a maximum life sentence. They are in Brighton Magistrates Court on Thursday October 18th at 10am to have their cases transferred to the Crown Court.

The ‘Bad Karaoke’ demo this Wednesday saw police use a 1972 council noise bye-law - designed for loud neighbours and street drunks - to arrest two protesters and confiscate sound equipment. The member of the public ‘offended’ by the racket was one Paul Hills. The police then imposed Section 14 of the Public Order Act, nicking three more, penning the rest of the demo and pushing them halfway down the hill, away from the factory gates.

For the recent Smash EDO Action Camp , police trotted out the old 1875 Public Health Act – originally written to combat the spread of cholera – as a pretext to break up the camp.

Is this just the reaction of a weary plod to persistent demonstrations, or could there possibly be any connection between this recent excessive policing and the hostile takeover of EDO being attempted by German firm ITT (ex-Nazi former suppliers of planes to the Luftwaffe)? The campaign in Brighton against EDO MBM has made tangible dents into US parent company EDO Corporation’s share price, as ethics-bypass investors read about the protests in the finance papers and kept away.

Either way, give them what they don’t want and make sure that you come along to the Annual Masked Halloween Demo outside the factory on Wednesday 31st October, 4-6pm, EDO, Home Farm Road, Brighton. Come in a costume and don’t forget your Halloween mask...