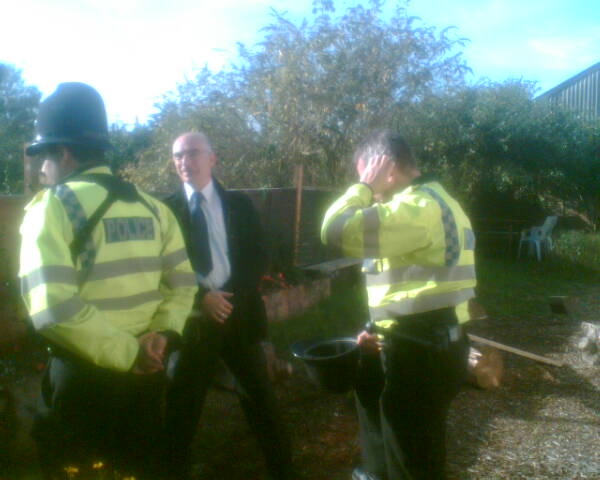 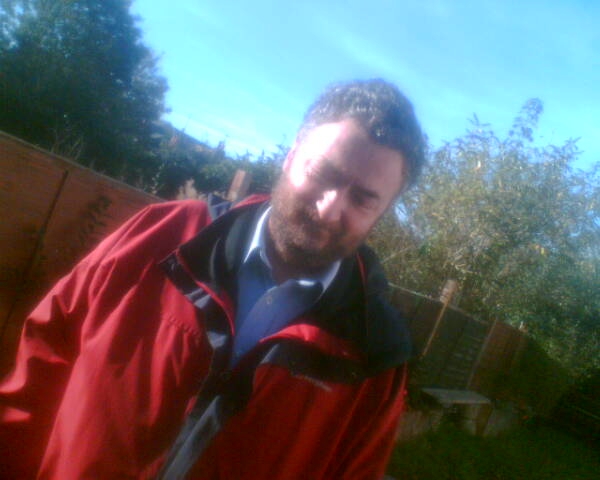 It seems it was “fourth time lucky” for Reading Borough Council bailiffs today, when they finally realised that it’s not a good idea to inform anarcho-commies (and other assorted revolutionary reprobates) 2 weeks in advance if you want to evict them from council land. Arriving unannounced at 9.00am this morning, they began by evicting our squatting neighbours, giving us enough time to form an impromptu resistance of 3 people.

This reporter arrived at 10.00am, to find approximately 8 police, 4 bailiffs, 4 council representatives and a bunch of burly builders boarding up buildings. Council bailiffs had kicked a large hole in our garden fence, which they left unguarded. After a short consultation we decided to climb through it, sit in our garden and peacefully resist. This reporter is ashamed to say that his resistance lasted a matter of minutes, before he was convinced to leave the garden rather than face the possibility of arrest. The resilience of his comrades was somewhat more respectable.

Leaving the garden, he discovered that the 8 police had left just as the fun seemed to be starting, begging the question “why had they come in the first place?”

Bailiffs and council employees attempted to use diplomacy (a facet for which they are not well known) to convince the remaining two gardeners to leave. Both refused, and there ensued a minor kafuffle. A charming gentleman, sporting a fashionable red coat (pictured) blocked our photographer from taking any pictures of this. At one point, he even attempted to steal the camera prompting the question “What the fuck are you doing?”. He immediately desisted in his kleptomaniac-like actions, but refused to stand aside and allow further pictures to be taken of this incident.

By this time, there was but one comrade remaining in the garden. Council employees and bailiffs, unsure what to do about this final potential menace, decided to call for back-up. After a wait of 15 minutes, a riot van arrived containing 2 of Thames Valleys finest, aka da Five-0, da Fuzz, da Filth, da Feds aka PC 5479 A Hunt, PC 5292 (somewhat camera-shy, but also pictured).

The officers of the law entered the garden and a new arrival from our group followed them. He was asked to leave, with the promise of some conversation, which he did not get. Once again we were down to one solitary individual, peacefully refusing to leave. The officers of the law asked him to move on; he refused. This called for extreme solutions: one police man got on the phone and asked his boss what he should do. The answer was clearly “do nothing”, for that is what they did….

It seemed that no police or bailiffs actually wanted to arrest our “last man standing”. Perhaps they realised the potential danger that they would be putting themselves in (for he is a 3rd dan black belt in origami…), but more likely there was nobody that was prepared to be “the one that arrested a gardener”. In any case, it eventually fell to a gentleman from the council to forcibly pick him up and remove him from the garden. This signalled the end of our resistance, and we called it a day.

At the time of going to press, several ideas are being floated about to keep up the momentum and build upon the community spirit that Common Ground has created so far. Needless to say, this is not the last that Reading Borough Council will hear from us, and it may not be the last time we set foot in our garden