The History of the Kurdish Freedom Struggle in Turkey.

Why is Turkey threatening to invade Kurdistan and what is the history of the Kurdish struggle for freedom within Turkey? 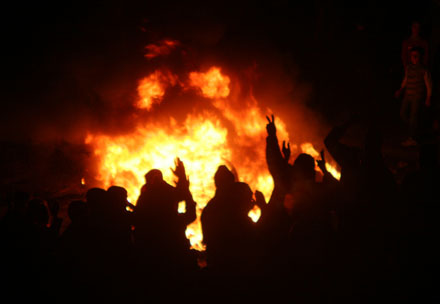 The story of the Kurdish fight for freedom is one of the most profound and awe inspiring in history.
By Hevallo.

Numbering some 35 million worldwide, the Kurds are often referred to as the 'largest stateless people in the world'. And this is true. The internationally recognised right of self determination is denied, exclusively, to the Kurdish people.

All peoples and regions have a right of self determination. The Kosovan's, the Palestinians, the Welsh, the Catalans, the Irish and every other nation state or autonomous region.

In the North of Ireland after a long painful struggle the British army left and a peaceful and political resolution of the conflict was brought to a small population of less the 2 million.

The Kurdish people number some 35 million and still they are denied a state, federation or autonomy of their own. They are still denied basic human and political rights.

After the First World War and the break up of the Ottoman Empire, the Kurdish people were denied self determination first promised to all the people of the Middle East under the Woodrow Wilson Principles and then under the 1920 Treaty of Sevre which allowed for a Kurdish state to emerge.

The Kemalists under Mustafa Kemal Ataturk, took over power from the Ottoman Sultans and called on the support of the Kurds as Muslims to defeat the 'foreign Christians' of Armenians and Greeks. After the victory of the Kemalists there would be no thanks for the Kurds. The Peace Treaty of 1920 signed at Sevre was renegotiated by Mustafa Kemal and the Kemalists. With some trickery in relation to the Kurds they signed a new peace treaty at Lausanne in 1923, now excluding any possibility for the Kurds to have any form of self determination. For instead of unity based on religion the Kemalists now promoted another identity above all else, Turkishness.

So, in just a couple of years, the Kurds went from being the closest brother of the Turks to being lower than a dog not worthy of a name. It is summed up nicely by two quotes with just 3 years in between them. The first is when the Kemalists needed the Kurds to give birth to their new Turkish state.

"As a result of a thousand years of common religion, common history and common geography Turks and Kurds are connected both materially and spiritually. Today they are facing common enemies and common dangers. They can avoid these common dangers only by common effort. Therefore we can definitely say that it is a religious and political obligation for both nations to love each other. A Turk who does not love a Kurd is not a Turk and a Kurd who does not love a Turk is not a Kurd." Ziya Gokalp June 5 1922.

The second quote is from only 3 years later, when they had achieved their military victory with the help of Kurds. The betrayal at this time is summed up well in the story of a Kurdish parliamentarian, Hasan Hayri which you can read here. But this next quote is from Ismet Inounu who negotiated the Lausanne Treaty with Mustafa Kemal.

"We are frankly Nationalist....and Nationalism is our only factor of cohesion. Before the Turkish majority other elements have no kind of influence. At any price, we must turkify the inhabitants of our land, and we will annihilate those who oppose Turks or 'le turquisme'." Ismet Inounu May 4 1925.

Chilling words. And annihilate is what they did. Of course the Kurdish people did not except that they had to suddenly abandon their language and centuries of tradition and culture and began rebellions. One of the first was the Shiekh Said uprising or Serhildan in 1925.

Prophetic words from the then British ambassador to Turkey who wrote of the Turkish suppression of the Kurdish uprising.

"The few remaining rebel centres appear to of been captured. The extreme severity of the Turkish measures of repression may of temporarily break the spirit of rebellion, but will probably produce a good deal of future hostility to Turkish rule on the part of the remaining Turkish Kurds, and this may eventually complicate the situation on the Irak border." Mr Lindsay. April 22nd 1925. British public record office.

The leaders of the Sheikh Said uprising, including Sheikh Said were all hung in public on gallows in Diyarbakir. This is from the summing up of the verdict by the Turkish judge.

"You have all acted in behalf of one cause-the establishment of an independent Kurdistan.......Everyone should know that the government of the young Republic will not tolerate reactionary agitation or any kind of other accursed activities and that its firm measures will leave no place for this sort of rebellious movement. The poor people of this region, who have for centruries been exploited and oppressed by shaikhs, agahas, and begs, will be liberated from your evil agitation and, guided by our Republic that promises them progress and hppiness, they will henceforth live in prosperity and happiness. You shall pay with your lives, by hanging from the gallows of justice.........send away the convicts" Mazhar Mufit Kansu, judge of Diyarbakir Independence Tribunal.


So here we have the beginning of the criminalisation of Kurds and the Kurdish liberation movement in Turkey.

Of course there were other Serhildans or uprisings, 28 in all, including the major uprisings of Ararat and Dersim, which again were brutally, and I mean brutally suppressed. Kurdish villagers were slaughtered on mass and systematically.

"For years the Turkish government has attempted to assimilate the Kurdish people and with this objective has been oppressing them, forbidding them to read newspapers and publications in the Kurdish language, persecuting those who speak their mother tongue, organising forced and systematic migrations from the fertile lands of Kurdistan to the uncultivated lands of Anatolia, where these migrants perished in large numbers....Three million Kurds live in their country and ask only to live in peace and freedom while keeping their race, language, traditions, culture and civilisation... Through my voice they ask your excellency to let the Kurdish people benefit from the high moral influence of your government and bring an end to this cruel injustice."Seyid Riza of Dersim. July 30 1937.


Not long after that Seyid Riza was hanging from the gallows. Another terrorist!

It was, "Happy is he who calls himself a Turk" one of Ataturk's phrase's to reinforce the message. Certainly it was only misery for anyone who called themselves a Kurd.

Village clearances and forced deportations were the order of the day.

Turkey banned Kurdish and any expression of Kurdish identity or culture. This was a serious and planned, determined effort to annihilate the Kurdish identity in Turkey. There was no such thing as a Kurd only 'Mountain Turks' by which the Kurds were now known. A whole raft of racist stereotypes and discrimination were targeted towards the Kurds. Just like as in Ireland when the English stereotyped and made racist jokes about the 'thick or drunken Irish' the same was true of the Kurds in Turkey. Racism that has a deep resonance still in Turkey today came from this time. Many Kurds were eager to be 'Turkish' and escape this cruelty.

But Kurdish survived in the villages and hamlets in the mountains and plains of Kurdistan and with time the Kurds in Turkey were influenced by events in Iraqi Kurdistan where Mullah Mustafa Barzani was leading the Kurdish revolts. This had an impact on the Kurds in Turkey and reinforced their self awareness as Kurds.

The rising awareness of the Kurds was met in 1971 by a military coup d'etat and savage repression of the Kurds again with martial law being enforced in Kurdish towns and cities and many Kurdish activists being dragged through the courts for having fanciful ideas of their Kurdish origins. More terrorists! Ismail Besikci, a Turkish sociologist was imprisoned at this time to fifteen years in prison for daring to suggest the Kurdish origins of the 'Mountain Turks'.

These repressive measures, that increased after the 1980 military coup d'etat, only led to many more Kurds being radicalised and most being forced into exile to escape Turkish repressive measure. Soon though, in the early eighties there emerged the beginnings of the 29th Kurdish Serhildan in Turkey with the forming of the PKK, (Partiya Karkerin Kurdistan) led by a Kurdish student named Abdullah Ocalan from Urfa.

Ocalan and others realised the futility of trying to campaign or lobby for Kurdish rights in Turkey, after all, to do so was seen as 'terrorism' or 'separatism' and so they began to build a guerrilla army that would confront, militarily the Turkish authorities and demand Kurdish rights.

The PKK soon became popular with the Kurds of Turkey and neighbouring Kurdish colonised states in Iraq, Iran and Syria. Kurds from all of these areas joined the PKK and on the 15th August 1984, the Kurdish armed struggle for Kurdish Freedom began. Again, Turkey labels this Kurdish Freedom Movement.

It was the armed and political struggle of the PKK that brought the Kurdish people in Turkey away from being 'Mountain Turks' to the position that they find themselves today. The Kurdish Question far from being solved by annihilation and assimilation is at the top of the international agenda. The Kurdish Freedom Struggle has come a long way but the Turkish mentality remains the same. Annihilation and labelling of 'terrorism' they continue to apply a military solution which has, from their point of view, historically only brought disaster for them.

As the Turkish army are poised to enter Kurdistan, it is time for the international community, and those inside Turkey, to bring the Turkish military and elected government to their senses.

To facilitate through international mechanisms some sort of political dialogue to start a process to reach a political settlement to The Kurdish Question with Kurdish representatives, so Turks and Kurds can face a peaceful future of equality and prosperity in a democratic Turkey.

The alternative is grave. Not only because of the blood that will be spilt again between Turks and Kurds, but because every Turkish attempt to suppress the Kurds has emerged a stronger Kurdish Freedom Movement. The 35 million Kurds of Iraq, Iran, Syria, Turkey and the world wide diaspora, will all have a common cause and unite.

The Kurdish saying "Please, increase your cruelty, it will hasten your downfall" comes to mind!