Switzerland, Bern. The conservative and right winged party SVP tried to do a "march to Bern" on october the 6th. This march was planned as a part of the racist and antisocialist election campaign of the SVP. Planned was also a celeberation on the central place of Bern. What u got 2 know: the fascist leader Mussolini and his party once did a "march to rome" and adolf hitler and the NSDAP did a "march to Berlin". So this march of the SVP was a clear provocation.-

Massive riots stopped the march. At the central place of Bern a huge stage, several vans, mics - everything belonging to the SVP - was destroyed by anarchists and communists. The marchers were not able to reach the place though police fought for them against the rioters. 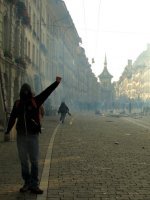