If anyone had any doubt about the mafia being the number one success story for (democratic) Capitalism an article published today in most Italian newspapers should put you straight on that one. Italy was founded by freemasons and run by the mafia from the off but now the mafia have recently become "ligit" business men or rather more accurately they have totally corrupted the entire politcal process and are therefore totally exempt from all controls. 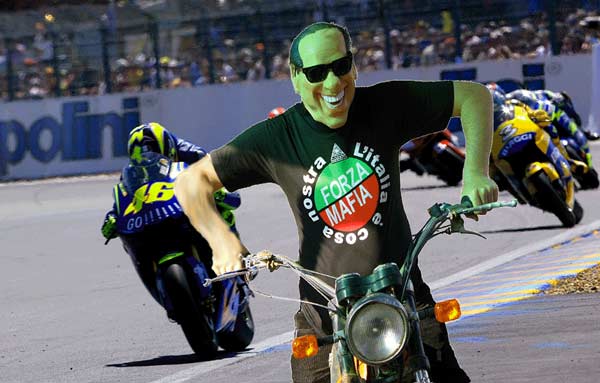 Politics in Italy is like religion people kinda believe in it, your born into a left wing family or if not your born into the other lot. Same thing if your born into a mafia or masonic family or both they often over lap. Some Italians, quite a few, still cling onto their leftist dreams but now their heroes are in power it is very difficult period for them.
There are some serious scandals going like the one where the Minister for Justice Clemente Mastella, is keen to take judge Luigi De Magistris off a case in which he is rumoured to feature.
While investigating a huge corruption scandal inside the Regional Government of Calabria
the judge discovered that his direct boss had an interest, so he went on with his investigations
and was removed from the case. The corruption appears to have been controlled by a masonic lodge in San Marino. But if you check the Italian press over the last few months there you'll find dozens of potentially high profile scandals, I say potentially because obviously the Italian (corporate) media does not how shall we say "do them justice". The court cases drag on for years with very little news coverage and the defendents usually get off very lightly with hardly anyone spending time behind bars. Beppe Grillo is one ray of hope, hope he lasts.
Oh by the way don't think that the Mafia is limited to the south of the country, the good folks of Chianti Shire will be well aware that Tuscany is a prime site for mafia money laundering
which is one of the reasons for the "development" of the once fine Tuscan hillsides.
The latest battle in the area is against the airport at Ampuganano, just outside Siena, which is home to the, MPS bank, the oldest bank in the World and the one that recycles most Mafia money. I guess a lot of people in the UK buy Organic pasta, and other foods from Italy funny that a lot of it comes from Siscicly, but like I said when you are exempt from controls you can use toxic waste as Bio Compost, no I am not kidding, it happens all the time.
You got a truck full of toxic waste, you get a piece of paper which says it is organic compost
so enjoy your Pasta because Organic in Italy doesn't stand for shit !!

here's the BBC's version on the Mafia, perhaps they will be allowed to enter the UK stock market, where my word is my bond, Mafia Plc or perhaps a public company fit nicely into
UK local corruption plans !1

http://news.bbc.co.uk/2/hi/europe/7057413.stm
Retailers warn of growing Mafia influence in the south
Italy's retailers have denounced the growth of Mafia extortion rackets which they say now affect big companies as well as smaller ones.

The Mafia has turned into one of Italy's biggest business enterprises with a turnover of more than $120bn (£60bn) a year, a new report says.

The report, prepared by Italy's leading retailer's association, warns of growing Mafia influence in the south.

It estimates that 7% of Italy's output is filtered off by organised crime.

The retailer's association says it is seriously concerned by the spread of Mafia extortion rackets from small to big businesses.

Some of Italy's best known and largest construction companies are denounced by name in the report for allegedly turning a blind eye to organised crime.

Organised crime is present in all areas of the economy, from food manufacture to tourism, from real estate to finance and in the service industries, the report says.

Big business also finds it easier to negotiate agreements with the Mafia rather than to denounce extortion rackets to the police, it adds.

The study alleges that 20% of Italian shops pay regular hush money to criminals to carry on business undisturbed.

The proportion is much higher in southern Italy. In Sicily, eight out of 10 shops pay a regular monthly sum to the Mafia, the report says.

Deputy Minister of the Interior Marco Minniti said the growth of Mafia business crime was alarming.