Crash space for the bookfair

Those coming from out of town for the anarchist bookfair are invited to crash at the rampART social centre from Friday evening till Sunday (or longer by prior arrangement). Bring a warm sleeping bag as it's got pretty drafty recently. Be aware that you won't get an early night Saturday due to the noborders/rampart benefit after the bookfair (details below). Rampart is a short bus ride or tube journey to the new bookfair venue. It takes about 10/15 minutes by bus, train or bike, 25 minutes to walk. 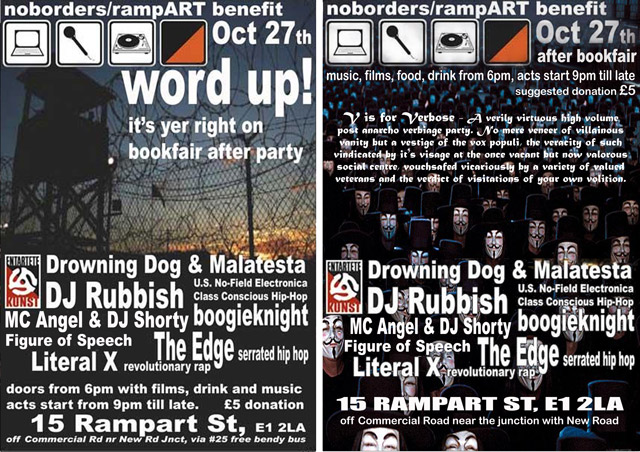 The women's anarchist nusicance cafe is held every penultimate wednesday
of the month at rampART. Open from 7pm til 11pm

The months WANC is themed around polyrhythmic living and loving with live
music and guest speakers discussing different ways of conducting
relationships. There'll also have a clothes exchange fundraiser! You bring
YOUR fabulous but no longer wanted clothes and exchange for someone
else's!

WANC is a non-profit making, DIY community cafe that exists because of the
input of the women who attend, so get involved! People are always welcome
and needed to contribute and muck in - gathering food, driving, getting
the bar in, prepping food, cleaning, buddying newbies, flyering. If anyone
is free on the morning of Wednesday 24th October and can gather food from
the skips in Vauxhall, or any other location, please contact us, so we can
add you to the text contact list.

The film night on thursday is about homelessness with a feature length
film about homelessness and housing rights activism in Japan. There are at
least 24,000 homeless in Japan living in tents and cardboard shacks under
bridges, inside parks or railroads stations. Homelessness was largely
unknown in Japan until the economic bubble burst in the early 1990s and
unemployment began to rise. Osaka, Japan's second largest city, has the
countries largest homeless population, over 8,000 people. Some of those
formed a tent city in and park and formed a homeless people's association.

We don't have details about the film but the film maker will be present to
answer questions and we'll also show additional short films about
homelessness and squatting in this country.

Next reading group will be reading Paul Feyerabend's 'Thesis on Anarchism'
and a selection from his book, Against Method.

Documents can be downloaded here:

Since it needed a bigger venue again the bookfair has moved to Queen Mary
University on Mile End Road, close to Mile End and Stepney Green Tubes
which makes it close to rampART too. There'll be stalls, meetings, films
and cabaret etc plus thousands of like minded people and a chance to meet
people you haven't seen since the climate camp ;-)

With the bookfair nice and close this year and both noborders and rampART
in need of cash, we've jumped at the chance to host a post bookfair
benefit gig. In keeping with the verbose nature of the day, the after
party features anarchist poets, conscious hip-hop/rap plus DJs, films and
more.

If you still wanna party after the noborder/rampart benefit is finished or
arrive to find rampART too full, you might consider checking out the party
at Dame Colet House in Stepney which is apparently a hardcore all-nighter
with Diverse polish funky dub reggae, Siren DJ Reknaw-Siren Sound system,
Rowan Megabitch, MC Chickpea Terra Audio, 187 Sound System Headjam Ras,
Simeon Judah and PinkPanther.

All kinds of nonsense has been going on in the street recently with theft
and infighting going on in some of the squatted houses leading to
evictions assaults and generally nastiness.

On top of that, the rampART has been targeted by a local gang of teenagers
who have made it their mission in life to smash every window in the
building and they've been making flying visits a half dozen times every
day for the last week or more. However, on a more positive note, the first
floor is better ventilated than ever before.

* glass, perspex, chicken wire or metal grills to fix and protect the
windows

* a long shot, but anyone got slide door rollers, something quite
substantial? (fire exit has been kicked in so we are forced to get round
to the outer doors)

* more realistically perhaps, anyone with an arc welder, angle grinder,
circular saw and some time on their hands before saturday to help build
the new fire exit doors?