As some comments on a recent article indicate [see

http://www.indymedia.org.uk/en/2007/10/384167.html?c=on ], even top-notch activists often know precious little about this exceptionally grave and widespread abuse of state power, and even less about the decadelong struggle against it. So here's a few details, just in the nick of time for the 9th Annual Rally against Custody Deaths today (Assembly: 12:30 Trafalgar Square). Additions welcome! 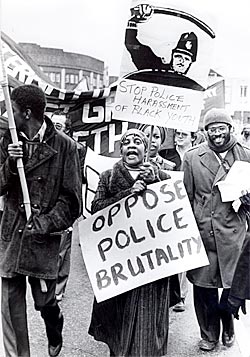 
- How many people get killed by the police and in UK state custody?

The rule of thumb is 1 victim per week killed by the police forces of England and Wales alone and at least 10 more in UK state custody dying an untimely death (i.e. inside prisons, mental health institutions, detention camps etc.).

The NGO Inquest offers detailled statistics of police and prison deaths derived from official numbers for more than the last decade. [1] Official 'I'PCC figures add up to almost 600 deaths in custody during the last 3 years. [2] According to a recent study called Annual Report 2006/2007 of the Forum for Preventing Deaths in Custody consisting mostly of official departments and commissions, most of these deaths could have been prevented [3]. However, since the victims are all poor and / or black ...

The first recorded death in custody case was a homeless Nigerian immigrant named David Oluwale who was found dead in a river in Leeds 1969. His case was also the one and only exception where any officers were convicted, tough only for assault charges and NOT for manslaughter, let alone murder. [1] Only recently a 2nd book was published on this case, benefiting from newly declassified documents. [2] As the NGO Inquest points out, 'a disproportionate number of Black people and those from minority ethnic groups have died' in state custody. [3] However, as INJUSTICE co-director Ken Fero [4] explains, in absolute numbers the majority of deaths in police custody in the UK remain whites, though black bereaved are more likely to start campaigns demanding justice. What all victims of death in state custody do have in common, is that they belong definitely to the class of the 'havenots' and mostly live in tough inner city areas. Cause what would happen if the police started killing one rich white resident of a posh area after the other, guess you can imagine yourself ... Inquest speaks of 'institutional racism in the criminal justice system' [2]
And by the way, did you know that 'within mental health settings', where again black males are disproportionately affected, torture a.k.a. 'Pain Compliance' is being officially considered as O.K., too? [5]


- What about campaigns to end this grave problem?

Since the 70s, mostly black people had campaigned again and again. After a rise in casualties in the late 90s and the production of the groundbreaking documentary INJUSTICE (released 2001) [1], the United Families and Friends Campaign UFFC was launched in 1997 [2], which organised the first Annual Procession in 1999. Recently, the Birmingham based Mikey Powell Campaign [3] was most active, just having relaunched their fabulous website 4wardever.org [4].


- Do these campaigns have some effect at all?

According to the statics of Inquest, at least the police custody deaths are contantly going back since the last peak in 2003 -- clearly thanks to the increased pressure maintained by the UFFC & Injustice lot. As Tippa Naphtali from the Mikey Powell Campaign and 4wardever explains, in Birmingham up to now there were no more deaths in police custody since they started campaigning heavily. That the 'Independent' Police Complaints Commission ('I'PPC) was created as the at least officially 'independent' successor of the former Police Complaints Authority (PCA) in 2004 [1] definitely was a reaction to various protests from 'The Brixton Disturbances (1981)' [2] to the ongoing campaigns and criminal lawsuits against fallible officers instigated by the founders of the UFFC. However, as long as there is so little to nothing solidarity shown from virtually everybody except the bereaved themselves, the possibilities are clearly limited.


- Why is there so little response from the 'radical left'?

You tell me. For years, especially the weak presence at the annual death in custody protest has been criticised loudly in these pages: 'Around 150 people were there for the demo to support the familys. This is piss poor when you consider recent events.' [1] -- in vain. For me as a white activist, frankly the painful question remains: Wouldn't this be different, if the recent campaigns had been instigated and lead by white middle class activists instead of black people?

1) Be informed! An easy way is to subscribe to the excellent newsletter provided by the 4wardever. just click

http://visitor.constantcontact.com/email.jsp?m=1101657342054 , then confirm the email you get sent, perhaps change your options as to which info you want. If you've not seen the brilliant documentary INJUSTICE yet, get yourself a copy via

http://www.injusticefilm.co.uk , or even better, organise a screening in a social centre near you!

http://petitions.pm.gov.uk/CustodyDeaths/ "put your mouse where your mouth is"!

4) Spread the word! Join / offer your help to a local campaign! Come up with whatever's possible for you yourself and do it!