Royal Navy to patrol the Persian Gulf in the spring, says the Daily Telegraph

The British establishment is in complete denial about its prepartion for the next step of the genocidal warfare. Will the British public fall for it again? 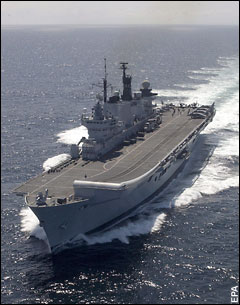 [Royal Navy aircraft carrier HMS] Illustrious will sail for the highly sensitive waters near Iran accompanied by Edinburgh, a Type 42 destroyer whose main role is
providing air defence, and Westminster, a Type 23 frigate.

Two minesweepers and three support vessels from the Royal Fleet Auxiliary will complete the deployment for Operation Orion 08.

The ships will spend about six months in the Gulf, the Indian Ocean and the Red Sea.

Their presence may coincide with a crucial period in the West's confrontation with Iran.

Observers believe that the spring is the last possible moment for President George W Bush to order military strikes against Iran's nuclear programme. The imminence of America's presidential election may make it impossible for Washington to carry out an attack any later."