Copyleft artwork by Brazilian cartoonist Latuff, on behalf of the brave Palestinian people and their struggle against U.S. backed IsraHell's state terror. 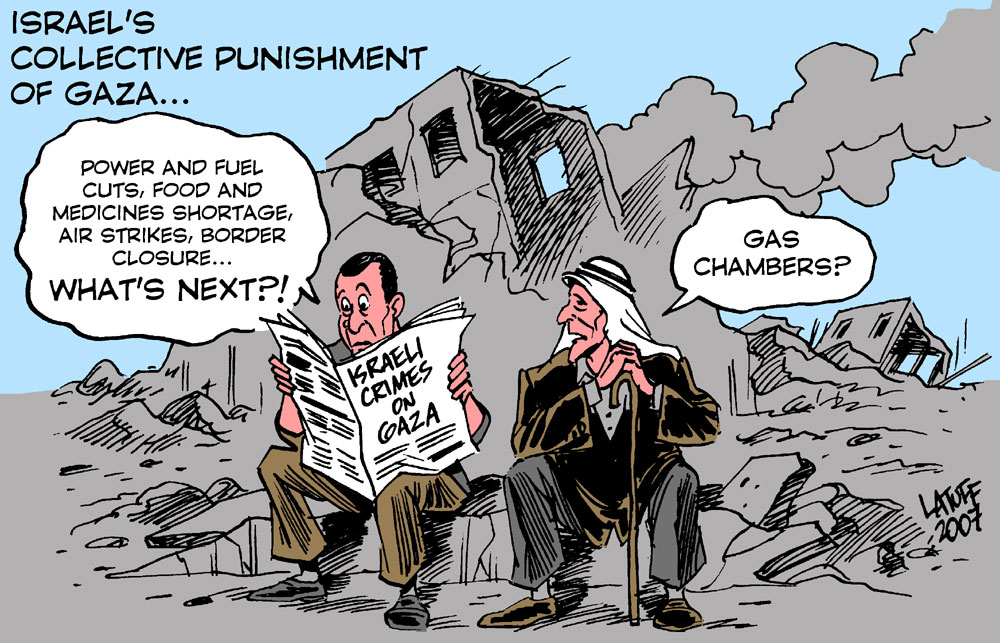 "Ramallah is not Auschwitz. Israel is not the Third Reich. We have no death camps and we haven't massacred one third of the Palestinian population in gas chambers. Therefore, everything we do is quite all right. We may fill the occupied territories with tear gas and blood, we may kill and injure and torture and blackmail and dispossess, we may surround millions by electric fences and tanks in tiny enclaves, we may hold them under siege and daily bombing, we may make pregnant women walk to hospitals, and we shoot ambulances too, don't we. But as long as we fall even an inch short of the atrocities of Nazi Germany, it's all fine and good, and don't you dare make the comparison.
"
Ran HaCohen, writer, teacher, who teaches at Tel-Aviv University.

Source of the quote above

Letter From Israel
by Ran HaCohen

Sorry to disappoint some of my readers: terrorists haven't got me yet. Yesterday (Saturday) in Tel-Aviv they were close, but no cigar. A minute ago, my parents called from Haifa saying they just survived another attack. "May they move next to your home", an American reader identifying himself as "Baba" recently wished me. Thank you, dear Baba. Inside every "anti-terrorist" there is always a little terrorist yearning to come out. One can only imagine what you would do with your destructive energies, had you been living in a besieged refugee camp in Palestine rather than in a cosy American domicile.

Jose Saramago, the great Portuguese writer and winner of Nobel Prize for literature, visited Ramallah last week (24.3), days before the present Israeli re-invasion. He came with a delegation of the International Parliament of Writers (IPW), together with Russell Banks (USA), Wole Soyinka (Nigeria), Breyten Breytenbach (South Africa), Bei Dao (China), Juan Goytisolo (Spain), Vincenzo Consolo (Italy), and Christian Salmon (IPW Executive Director). The IPW also runs an appeal for peace in Palestine, where "the entry points to villages have been walled over, civilian population movement is paralysed, ghettos and reservations are created, where only tanks patrol and helicopters over-fly the area on a permanent basis". While in Ramallah, Saramago took the ghettos-and-reservations analogy a step too far and compared it with Auschwitz and Buchenwald, the Nazi death camps. Later, IPW distanced itself from Saramago's words.

Saramago's comparison has done it: at last, Israel had its desired spin. No one asked what Saramago had seen to make him use such an appalling analogy. Ramallah was forgotten immediately, only Auschwitz was left. The entire liberal intellectual main-stream – from playwright Yehoshua Sobol to rhinocerised Ha'aretz journalist Ari Shavit – did its best to attack and discredit Saramago. How vociferous can one be when shouting consensus slogans.

And how quiet can one be when a critical word is required. Of Israel's countless writers and poets, of the entire glorious literary milieu, only six persons bothered to sign the IPW appeal, long before Saramago's words. One of the six is an Israeli Arab (translator and writer Mohamad Ghanayem), three are Israeli Jews of oriental origin (writer Shimon Ballas, children's books writer Ronit Chacham, poet Sami Shalom-Chetrit), and of European origin we have poet Yizchak Laor and playwright Matti Meged. Have you ever heard of them? Probably not. But you probably did hear of Amos Oz, A.B. Yehoshua and their ilk. Now you know why. They did not sign the appeal. But they would be more than happy to attack Saramago, I am sure.

So this is the Auschwitz logic in a nutshell. Ramallah is not Auschwitz. Israel is not the Third Reich. We have no death-camps and we haven't massacred one third of the Palestinian population in gas chambers. Therefore, everything we do is quite all right. We may fill the occupied territories with tear gas and blood, we may kill and injure and torture and blackmail and dispossess, we may surround millions by electric fences and tanks in tiny enclaves, we may hold them under siege and daily bombing, we may make pregnant women walk to hospitals, and we shoot ambulances too, don't we. But as long as we fall even an inch short of the atrocities of Nazi Germany, it's all fine and good, and don't you dare make the comparison.

People sometimes say that the Better is the greatest foe of the Good. Israel is now demonstrating how the Greater Evil is Evil's best friend.

And many thanks to Adolf Hitler, for setting such insurmountable standards.

A recent subset of the Auschwitz logic. Europe is warning Israel: don't kill Arafat. The United States is soothing: Israel has pledged not to kill Arafat. How magnanimous of Sharon. He can bomb ambulances and raid hospitals, shoot journalists and cut water supply to entire towns, but as long as he doesn't touch Arafat, it's all right. In return for Israel's pledge not to kill Arafat, the world has given him a carte blanche to kill all other Palestinians. Sharon couldn't ever ask for more.

So, We Are Not Nazis

But here is a minimal actual sample of what we are doing:

* March 30th. LAW (The Palestinian Society for the Protection of Human Rights and the Environment). This morning, five Palestinian officers (Khaled Awad (33), Ismail Zaid (56), Said Abdelrahman (60), Abdelrahman Abdallah (58), and Omar Musa (54)) have been found dead in an office building in Ramallah. Last night, Israeli forces had surrounded the building and prevented anyone from entering. The five bodies were found in one room, lying next to each other. They were injured in their faces and killed by gunshots in the head. LAW's assessment suggests that these five have been executed.

* March 30th. Excerpts from an Appeal for Help from Besieged Ramallah. "As we write this, there are US-made Apache attack helicopters overhead firing on the city. Israeli bulldozers are creating permanent positions for the tanks in and around private houses. Some of us have had experience in other sieges, in Sarajevo, Dili, and elsewhere. There is a familiar pattern of emergency rapidly developing. This is the beginning of a humanitarian crisis. Immediate intervention is required to prevent a disaster.

"No Movement Possible: Inhabitants of the city are under complete curfew. There is no medical access. Palestine Red Crescent medical relief workers have not been permitted to provide medical services to the local population. Israeli forces are firing on anyone walking out on the streets.

"On Thursday, based on fears of an Israeli re-invasion, more than 500 inhabitants lined up in the mud and rain at the Qalandiya checkpoint – the only exit point from the city allowed by Israel – begging Israeli soldiers to allow them to escape. In response, Israeli soldiers fired over their heads, exacerbating the panic and causing most to simply return to Ramallah.

"Israeli Forces Using Human Shields: Israeli soldiers are occupying an increasing number of private residences and detaining the residents collectively in single rooms. Meanwhile, Israeli occupation soldiers have taken up armed positions in the houses or apartments of these residents.

"Food Resources Limited: There is no food entering Ramallah and no one is allowed to restock. There will shortly be a food and drinking water crisis. Some parts of Ramallah are already without water altogether. Israeli soldiers are also eating the food of residents while taking up positions in their houses.

"Electricity Being Cut: Large parts of Ramallah are without electricity and heat. The lack of electricity also means that residents are without television and any news reporting of the situation outside their homes. Many residents of the city rely on cellular phones for communication and without electricity they are unable to recharge their phones. Therefore, the population is being held in isolation and there is increasing fear and confusion. Also, some telephone landlines have been cut.

"Prisoners Being Taken: Israeli troops are calling upon all male residents between the ages of 16 and 40 in some neighbourhoods to 'surrender'. The wounded are being treated roughly and being denied medical access. Now, their fate is unknown.

"Gratuitous Vandalism and Destruction: There are on-going spiteful acts of destruction. Most commonly, Israeli tanks are driving over and flattening cars whether on the streets or parked on pavements in front of residences. Personal property inside houses is being destroyed in house-to-house searches.

"Due to fear of retribution, the names and contact information of those authoring this appeal have not been included."