Sarah Boseley, health editor The Guardian Friday October 5 2007 The government is accused by senior doctors today of selectively using inadequate evidence to promote the use of fluoride in the water supply. The public health measure, intended to improve the country's teeth, has attracted huge controversy. Anti-fluoride campaigners claim the chemical has potentially harmful side-effects, while dentists and some public health experts insist it is entirely beneficial and saves children from tooth decay. 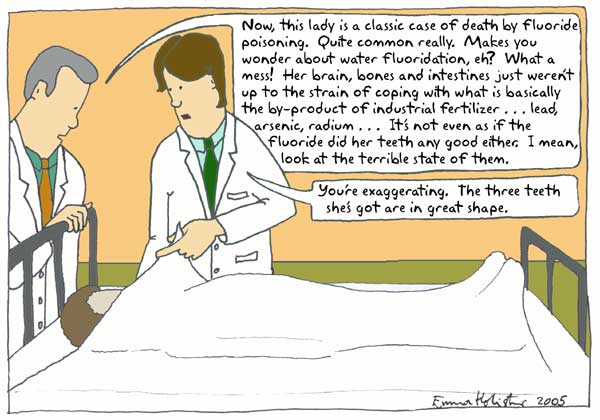 STOP WATER FLUORIDATION! It is a POISON!

In the British Medical Journal today, Sir Iain Chalmers, editor of the James Lind Library, which was set up to help people understand the evidence base of medicine, KK Cheng, professor of epidemiology at Birmingham University, and Trevor Sheldon, professor and pro-vice-chancellor at York University, say there is not enough evidence either way.

They accuse the government of "one-sided handling of the evidence" and add that "the Department of Health's objectivity is questionable", pointing out that until last year it funded the British Fluoridation Society, set up in 1969 to push for fluoride to be added to water supplies in more areas. It is up to local health authorities to decide whether fluoridisation should happen in their region.

In 1999, the Department of Health commissioned a systematic review of the evidence by York University. "Given the certainty with which water fluoridation has been promoted and opposed ... the reviewers were surprised by the poor quality of the evidence and the uncertainty surrounding the beneficial and adverse effects," they write.

Even the studies to show the benefits on teeth were few and inconsistent, they say. The rate of dental caries caused by tooth decay has dropped substantially both in countries which have added fluoride, such as Germany and Portugal, and those which have not, such as Austria and Sweden. There is strong evidence that using toothpaste containing fluoride reduces tooth decay.

Studies on the side-effects of fluoride in water were low-quality and it is hard to estimate how many people would suffer mottled teeth, and not possible to reach conclusions on other alleged harm, such as bladder cancer and bone fracture, they say. "There is no such thing as absolute certainty on safety," they write.

But the Department of Health used the York findings "selectively", they write, "to give an over-optimistic assessment of the evidence in favour of fluoridation." It commissioned research on the effects of water in which fluoride naturally occurred, but on only 20 people. This, together with the York review, formed the basis of the government's safety claims, they say. They call for proper randomised controlled trials.

In a comment piece in the journal, Rod Griffiths, regional director of public health for the West Midlands, credits 40 years of fluoridation for the excellent teeth of the people of Birmingham, in spite of their poor record on obesity and heart disease.

The DoH said it "makes no apologies for promoting the benefits to oral health which fluoridation offers". The York review showed fluoridation increased the number of children without tooth decay by 15%, it said in a statement, and adults in those areas had 27% less caries.

The department was committed to further research to strengthen the evidence base, it said in a statement.