around 30 cyclists met at 8.30 this morning for the opening of the new eurostar terminal at st pancras station, london
they were highlighting the poor facilities and planning for bikes in contrast with the much-publicised claims of carbon-neutral travel to paris
the st pancras opening was also targetted by a greenpeace action against the third runway at heathrow 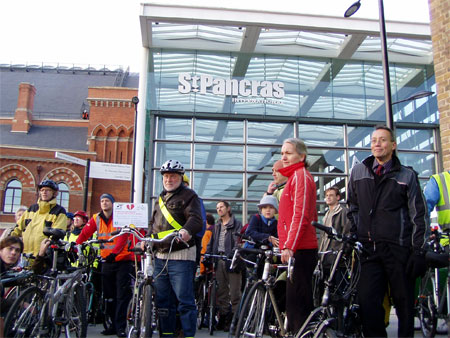 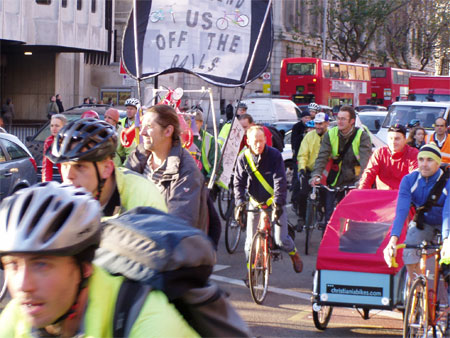 a stop on the marylebone road 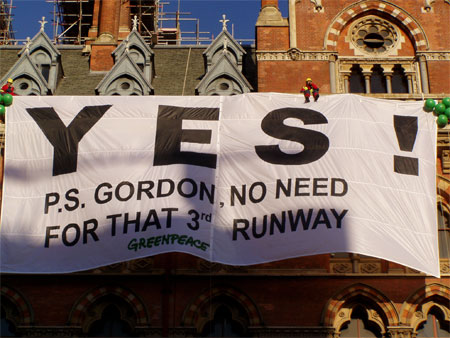 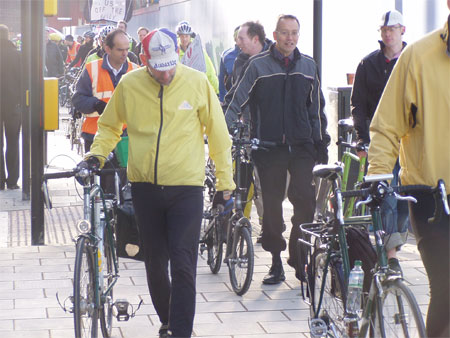 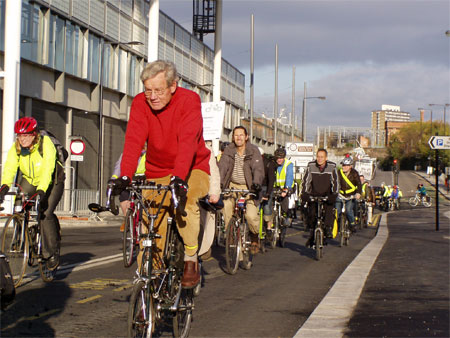 cycling down the taxi lane on pancras road 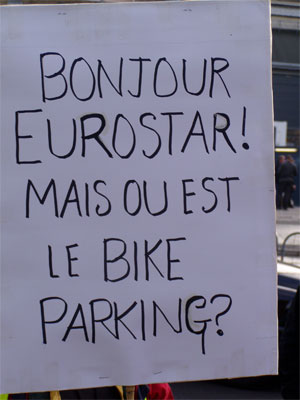 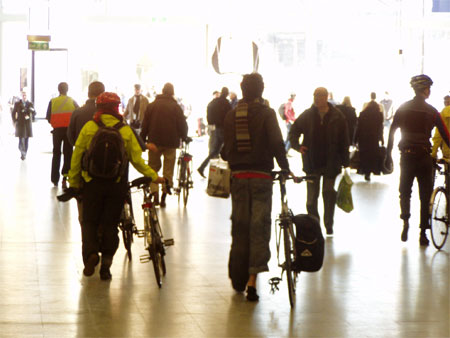 cyclists looking for parking in the station 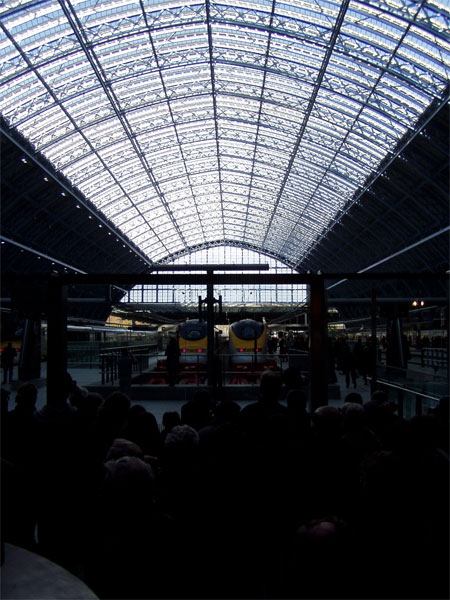 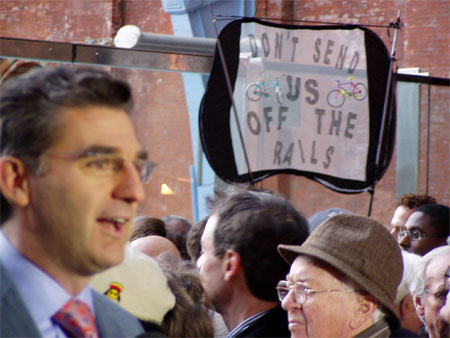 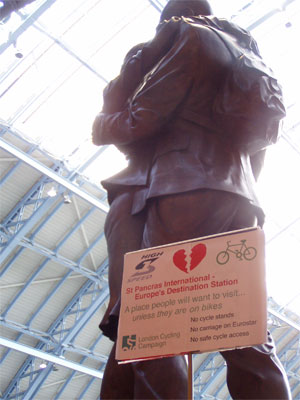 this morning's demo was called by camden cycling campaign and city cyclists, and was well attended by more than 30 cyclists along with two sound systems and several creative banners

accompanied by a handful of police cyclists the group set off at 8.30 and did a tour round st pancras in an anti-clockwise direction, noting that there were no cycle lanes other than the shared bus lane on euston road in front of the station. the pedallists stopped for a few moments on the euston road in solidarity with greenpeace protestors high up on the front of the building who had dropped a massive banner welcoming the new train, but pointing out that there was therefore no need for a proposed third runway at heathrow.

the cyclists then tried a clockwise route round the building, but this entailed getting off their bikes to walk up midland road, as there were no facilities for a simple bike contraflow here.

next was the search for cycle parking facilities. they were eventually found in an NCP-run car park where an official admitted that the 44 bike racks had only been put there yesterday after hearing about the protest. it was noted that the racks were bolted to the ground with visible normal nuts. the official told me that the car-park accepts no liability for any loss or damage, but that it is manned 24/7 and there are cctv cameras around. i pointed out that a thief armed with a spanner could make quick work of lifting any bike stand and the security doesn't seem failsafe to me.

from the tiny bike park there is a walk of several hundred metres to the terminal where crowds and media, accompanied by a small orchestra, were excitedly waiting for the first eurostar train. some of the remaining campaigners wandered around here with their banners. most notably, the 'professor of chaos' managed to place himself behind various tv commentators with his huge 'dont' send us off the rails' banner. this last stage of the demo was to highlight the currently inadequate arrangements for bike transit on the eurostar. you either have a choice of dismantling your bike, putting it in a bike bag and carrying it on as luggage - i've done this and it's not great! - or you can take it to the station the day before you want to travel, and send it ahead for some £40 each way (adding another two-thirds to the price of a cheap passenger ticket)

while eurostar and st pancras trumpet their "carbon-neutral" trains, it appears that they still bend over to facilitate car and taxi travel to the station but no encouragement or planning exists yet for cyclists.

greenpeace were giving away t-shirts (were they sponsored by eurostar?) bearing the slogan "i took 2:15h to save the climate - eurostar st pancras - paris 14/11/2007", but while trains are to be applauded over air transport, surely the humble bicycle must be an even better option?

at least the threat of protest resulted in last-minute parking facilities, but the pressure must be kept up to get more joined up thinking about train and bike travel