Currently in Austria the number of deportations is increasing. The forced deportations of "well-integrated" families has provoked particular outrage. More and more frequently people are pulled out of their beds in the early morning, brought to deportation jails, and are kicked out of the country in the course of mass deportations by charter flights. In this way numerous people are deported, although entire towns demand their right to stay. 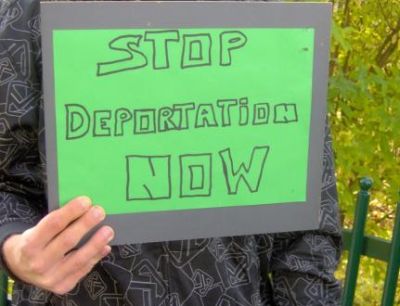 Demonstration for the Right to Stay in Frankenburg, Upper Austria, Oct 6, 2007

The politicians, despite protestations to the contrary, remain severe regarding the question of deportations. And it can be assumed that further restrictions will be put in place. On October 22 2007 Jörg Haider, the far-right governor of Carinthia, announced he plans to take a more rigorous approach to deportations in Carinthia. When asylum-seekers receive a negative response to their application for asylum from the authorities, they will be pressured to voluntarily return to their home country. If they refuse to do so, they are threatened with immediate arrest by the immigration police and forced deportation. The federal government is supposed to encourage the immigration police and other officials to carry out the applicable laws. The direction is clear: people without a valid legal status should be uncompromisingly deported. Even people who already have a legal status (such as a visa) are encouraged to "voluntarily" leave the country.

Up til now it was possible for individuals to get a half-way secure visa. Yet the possibilities are always decreasing, it was impossible to make fundamental improvements for the situation of the immigrants, and the laws have become increasingly restrictive in the last several years. With the new foreigner and asylum laws which went into effect on 1/1/2006 the lives of people who had already lived in Austria for a long amount of time were massively encroached upon and in many ways made illegal. Since then it is difficult to receive a visa even for individuals. Furthermore the EU decided upon the ruthless deportation of "illegal" immigrants through the use of charter flights.

The very brutal and ruthlessly carried out deportations nevertheless have caused more and more people to question the racist laws. In numerous communities groups of supporters have formed and the media has also taken up individual cases. Some people manage to achieve at least a temporary postponement of their deportation.

Yet often even declarations of support from mayors and governors do not help and the deportation authorities stand strictly by the order for expulsion. This procedure is defended by the supposed "duty" to execute the laws. We call this racism!

In the last year there were several protests against the deportation policies, which mostly only achieved regional attention. It was different, however, at a protest on October 6 in Frankenburg, in Upper Austria. The media interest was sparked. The flight of the 15 year-old Arigona Z. from the deportation officials on September 26 brought about a wave of support. Arigona explained in a letter that she would commit suicide if it came to her deportation and demanded the return of her siblings and father who had already been deported. The mother of Arigona was allowed to stay temporarily. The authorities were unable to locate Arigona despite great efforts. After about two weeks she came out of hiding and in the meantime is going to school again. But neither her legal status nor that of her mother is secure. At the moment the authorities are trying to convince the both of them to "leave voluntarily." The mother is not allowed to continue performing her job, and both are permanently under pressure. Nevertheless they are continuing to fight for their right to stay as well as for the return of the members of the family who were already deported.

Dennis M. protested publicly for his right to stay. After this was not granted to him by officials, he shoved a knife into his stomach in the main square of Steyr, in Upper Austria as a protest against his impending deportation. He survived the suicide attempt. On October 20 2007 300 people protested against inhuman deportations in Steyr.

Because of the media attention and increasing protests the politicians had to react. Nevertheless nothing positive came out of this and the Ministry of the Interior wants to continue carrying out forced deportations. It has been reported that a long planed action is currently taking place, in the process of which hundreds of people should be deported. Only in isolated cases in which a certain "level of integration" has been reached will discussions be possible. This "level of integration" will in the end be decided by the Interior Ministry based on a "checklist of criteria" decided by the authorities. This will result in no change because the Interior minister and his officials are not prepared to distance themselves from their plans.

In the past weeks "amnesty" for asylum-seekers has frequently been demanded - the Interior minister should act with mercy. Yet in the case of deportation it's above all a question of political will, which is clearly set on the continuation of the execution of racist policies. Therefore a fundamental change to the laws is necessary. While it is important to prevent individual deportations, the protests must also focus on challenging the structural racism of the system. It's not about "fixing" the asylum laws, but rather about abolishing racist laws targeting foreigners. Not only "well-integrated" families face deportation. The racist society makes life difficult for many people. The question is whether one fundamentally supports the deportation procedures and the laws which regulate them. Because these laws and procedures will always lead to so-called "difficult cases."

::: All human beings should have equal political and social rights, ::: independent from their origin, color of skin, religion, social status, sexuality and gender. Devices such as detention and deportation, racist laws and practices are used to draw lines in society. These devices and practices cannot be improved, only prevented and abolished. Racism is essential to their existence. Human beings are excluded in racist ways while others profit from their exclusion. Making deportations impossible and supporting migrants actively are acts of practical solidarity and civil disobedience against institutionalized racism.

Photos from the Demonstration for the Right to Stay in Frankenburg, Upper Austria, Oct 6, 2007:

http://no-racism.net/deportatiNO ::: deals with everday resistance to detentions and deportations, campaigns against airline carriers and companies that earn money through deportations, and actions against borders.