On Friday the 11th and Saturday the 12th of April 2008, we call for two days of demonstration, direct action, public information, street-party, squatting... in defence of free spaces and for an anti-capitalist popular culture. Through these two days, we want to help create more visibility of autonomous spaces and squats as a european/global political movement. We want to develop interconnections and solidarity between squats and autonomous spaces. We want to keep linking our spaces with new people and new struggles, and support the creation of autonomous spaces in places where there has not been a history of this kind of action. We want to build, step by step, our ability to overcome the wave of repression falling on us. 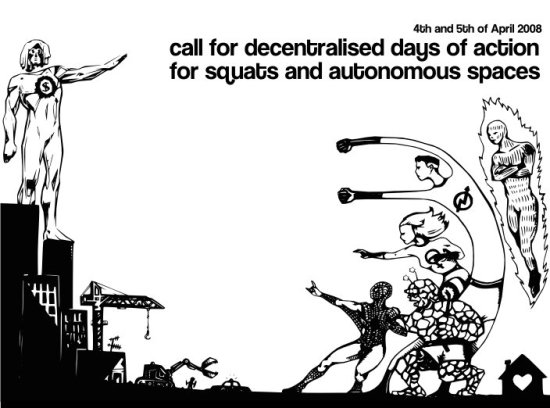 We call for decentralised and autonomous actions of all kinds, depending on what people feel to be the most appropriate to their local context. You'll find below the political content we wish to give to these two days.

For centuries, people have used squats and autonomous spaces, either urban or rural, to take control of their own lives. They are a tool, a tactic, a practice, and a way for people to live out their struggles. For decades, squat movements across Europe and beyond have fought capitalist development, contributing to local struggles against destruction; providing alternatives to profit-making and consumer culture; running social centres and participatory activities outside of the mainstream economy. Demonstrating the possibilities for self-organising without hierarchy; creating international networks of exchange and solidarity. These networks have changed many lives, breaking out of social control and providing free spaces where people can live outside the norm.

Among other things, these places provide bases for meetings and projects, for the creation and distribution of subversive culture, for the non-monetary based exchange of goods, resources and knowledge, for experimentating with new ways of living, for collective debates, for recycling and construction, for agricultural activities, for the production of independant media.

Whether we speak of urban squats or of purchased land, of negotiated or re-appropriated rural land, of restored factories or self-built buildings, these spaces are refuges for rebels and outlaws, poor and homeless people, radical activists, illegal immigrants. Social centres are crucial to us as part of a movement for social change.

= All over Europe, repressive agendas are being pushed by governments

They are attacking long-standing autonomous spaces such as the Ungdomshuset in Copenhagen, Koepi and Rigaer Straße in Berlin, EKH in Vienna and Les Tanneries in Dijon, squatted social centres in London and Amsterdam, Ifanet in Thessaloniki, etc. In France, squats have become a priority target for the police after the anti-CPE movement and the wave of actions and riots that happened during the presidential elections period. In Germany, many autonomous spaces have been searched and attacked before the G8 summit. In Geneva and Barcelona, two old and big squatting "fortresses", the authorities have decided to try to put an end to the movement. Whereas it is still possible to occupy empty buildings in some countries, it has already become a crime in some others. In the countryside, access to land is becoming harder and communes face increasing problems from legislation on hygiene, security and gentrification by the bourgeoisie and tourists. All over Europe, independent cultures are being threatened.

Several months ago we saw running battles in the streets of Copenhagen and actions everywhere in Europe in an explosion of anger at the eviction of the Ungdomshuset social centre. Since then, and with a few other big resistance stories that happened over the last months, we've managed to renew the meaning of international solidarity.

We are motivated by the same passions, we feel the same determination, face a common enemy in repression, and are united across borders by our desire to build a world of equality and self-determination. As unaligned and ungovernable islands of uncontrolled freedom we want to continue to act in solidarity, and strengthen our international links, no matter how many kilometres there are between us.

= Issues beyond the actions

We also would like these days of actions to enable and inspire discussion, to demonstrate various possibilities & strategies, to be an occasion to share skills. These are some of the issues we would like to push:
* what do we expect from and understand by autonomous spaces?
* What is their role in the pursuit of radical social change?
* Where do they lie on the scale of'alternative' to 'confrontational'?
* share information on the range of activities that take place in autonomous social spaces along with ideas for how to make them work;
*question the production of goods and services; and encourage the exchange of knowledge particularly between the town and the countryside.
* share experiences, inspire each other, find out how others live collectively, and their activities, alternative economic exchange systems...
* share various ways of getting spaces all over europe: illegal occupations, Do It Yourself constructions, wagenburgs, buying collectively, free contracts...
* share practical resources and a feeling of solidarity between:
different users of autonomous spaces (either current or potential): co-operatives, people without papers, activists, travellers, immigrants, urbanites, rural dwellers, small farms;
different ways of using spaces; activities for the community, meeting area for groups, living spaces;
* enable the forming of common strategies when faced with state repression or eviction;

= Who are we, how can we collaborate on this project, and make it happen?

At the moment, we are a group of people involved with various autonomous spaces around Europe, who decided to start discussing this call. We'll meet various collectives in the coming months and see how people feel about this proposal for european days of action, and how they want to get involved. Its success depends a lot on our capacity to create a bigger international working group. This would mean everybody who wanted to take part into it would try to start discssing the idea in various spaces, creating and distributing some propaganda materials and networking information about what's going on near them during those days. We would also like to organize a physical meeting about all this in the upcoming months. Get in touch!

Flyers etc can be found on our website. Please download the PDF file, print it and spread it around squats and autonomous spaces in your area.

The success of this call now depends upon our capacity to create a bigger international working group. The whole event will happen without any "central commitee", and will be made of a various autonomous decentralised actions. Still, we think it is important to have a physical meeting, in order to exchange ideas and strategies, discuss the contents of the call, see how to create common information tools around that project, how to connect and help the various local initiatives.
Thus, we're calling for an international preparation & coordination meeting on November 24th & 25th 2007, in the autonomous space "Les Tanneries", located in Dijon, France. It is a squatted social centre in a post-industrial environment, occupied since 1998. Thanks to years of struggle against the city council owning the buildings, the project has reached a certain degree of stability. It hosts a collective house, a gig room, a hacklab, a free shop, an infoshop, a collective garden, a library...

We hope that many of you will be able to join. Please tell us a bit in advance if you're planning to come, so that we get an idea of the number of people we have to accomodate and plan food for. You're very welcome to pass this invitation to squats and autonomous spaces that you know.

= Getting in touch & helping out

Please get in touch, by writing to april2008 at squat dot net. Any help with translations in whatever languages is greatly appreciated.