We Are The History

Six years after the G8 Summit in Genoa the trails against protesters and members of the police forces are still continuing. the trials against the police and carabineri have been delayed to benefit from the new regulations of prescriptive periods. The procecutors Canepa and Canciani show strenght in the trials against the 25 activists. Never before in the context of street protest such high charges were asked for.

In Germany activists call for a protest on November 17th. Under the slogan "Against the surveillance state and arbitrariness" people demand that a few people should not get punished for a legitimate and collectiv protest by facing them with specially contructed charges. 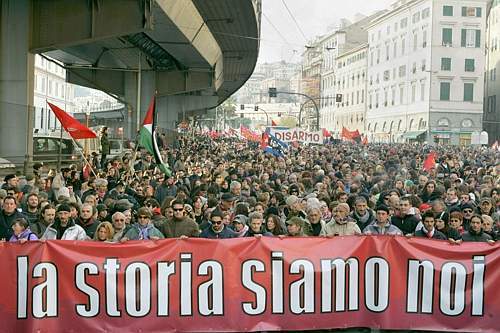 We are the history

Genoa was a revolt. The 25 accused people stay for the 300.000 who have been on the streets of Genoa. Despite all the differences there was a common goal: the deligitimisation of the G8 and the red zone.

For November 17th many of the groups who mobilised to Genoa at that time have called for a joint and powerful solidarity demonstration in Genoa. Meanwhile members of the Alleanza Nazionale and the right wing Police Union demand to ban the demonstration. The Police itself wants to protest under the slogan: "Luting to defend arguments, black block, no global". One of their unions has announced "sit-ins" on all public squares.

Updates Rostock
17:08 around 350 people are demonstrating in downtown rostock