On the Philippine Congress Bombing (and Glorietta Mall blast) 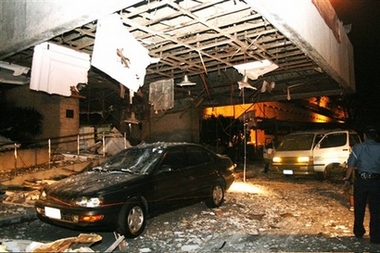 Bombing of the Philippine House of Representarives

AKBAYAN (Citizens' Action Party) Rep. Risa Hontiveros condemned in the strongest terms the bombing that took place inside Batasan complex, calling the attack a horrible assault on the institution itself. “This is not an attack against any individual member of the House of Representatives. This is an appalling attempt to destroy life, freedom and democracy,” Rep. Hontiveros said.

“Nothing can rationalize this act. We urge the authorities to immediately investigate the incident and go after the perpetrators of the bombing,” she added.

She likewise said that whoever planted the bomb wanted to scare the institution and the public in general. “It is meant to injure and scare members of Congress, especially since it was timed immediately after the adjournment of the session,” she said. “Most of the congressmen and women were about to leave Congress. But whatever the agenda or demand may be, this act of desperation would not succeed.”

“We are not scared. And we urged the public not to allow acts of terrorism to cause panic, since this is the motivation behind the act. We need to show to them that the nation is united in condemning the bombing,” Rep. Hontiveros added, offering prayers and solidarity to those who were hurt by the incident. According to initial reports, a driver in Congress died due to the incident.

She also warned against using this incident to threaten democracy. “We cannot help but fear that this would lead to the declaration of Martial Law or a state of emergency to give way to repressive acts. We caution the government against using the bombing to institute repressive measures,” Rep. Hontiveros said.


On the Bombing of the House of Representarives

Hataman had been in the midst of a group of Congressmen, which included Representative Luz Ilagan, one of the victims of the blast, on their way to the lobby after the session was adjourned. Hataman recalls the close call that almost claimed him as victim too. “I was also on my way to the lobby when Akbayan President Ronald Llamas asked me to stay with him for a while at the South Lounge,” he said.

Reacting to initial reports that the explosion is particularly aimed at a certain individual, Hataman says, “Yes that is a possibility. However, authorities must not limit their investigation on that angle. The extent of the incident is too immense to just dismiss it as a personal act. This is the Congress we are talking about. Every possible angle, every group or individual that may have the motive must be investigated. Other possibilities, especially in the light of the current political crisis must not be discounted. Conclusions or speculations must be avoided or we might just end up like the Glorietta incident, the investigation of which was hounded by inconsistencies and remains unsolved to this day.”

Hataman further conveys his sympathy and condolences to the victims of the explosion, especially to the family of those whose lives were claimed. “I also condemn this terrorist act not just for the terror it has sown but also for claiming the life of a colleague and brother in Islam, Cong. Wahab Akbar. Basilan and the Muslim community in general has lost a leader. Despite the differences that might have ensued between our families, the friendship that we shared before he became governor and the few years after that was enough to limit our scuffle in the political arena, and never at a personal level.”

He further adds, “To all the victims’ family, our deepest condolences. We will not stop until we get to the bottom of this cowardly act.”

News that the fourth fatality of Tuesday night’s (Nov 13) bomb attack on the Philippines House Representatives was local Global Call to Action Against Poverty (GCAP) Philippines activist Julasiri "Niki" Hayudini, has been met with shock and condemnation worldwide.

Julasiri "Niki" Hayudini, 49, was Vice President of the Assalam Bangsamoro People's Association, a local non-governmental organization active in the GCAP-Philippines coalition. He was an aide and close friend of Representative Wahab Akbar, who was also killed in the blast.

Fellow GCAP members in the Philippines today condemned the bombing saying that Niki’s decision to be part of the congressional staff was part of his dedication to do his utmost to make a real difference in his hometown of Basilan. The area is considered the poorest in the Philippines and is a known stronghold of the Islamic separatist Group Abu Sayyaf. Just weeks ago Niki was an active part of the local “Stand Up Speak Out” campaign on October 17th, which mobilized over 7 million Filipinos.

“I remember Niki in GCAP-Philippine meetings as friendly, cheerful and reliable and I am greatly saddened by the news. He was articularly active with youth campaigners who he encouraged to take the lead in calling for policies to end poverty in their communities. This cowardly attack leaves the poor he campaigned so tirelessly in an even more precarious situation and we vow to carry on his work in whatever way we can,” said Marivic Raquiza of GCAP Philippines.

“All of us around the world in GCAP mourn Niki's death, condemn the attack and weep for the sad state of affairs that the Philippines has fallen into. The country that has failed to protect its citizens from crushing poverty and hunger has now failed to protect its own officials so that terrorists can come through the gates of Congress and bomb lawmakers. Niki will not be forgotten and his work will go on through the massive global anti poverty alliance he was part of.” said Ana Agostino, Sylvia Borren and Kumi Naidoo, Co-Chairs of the Global Call to Action Against Poverty alliance.

AKBAYAN Chair Emeritus Etta Rosales expressed little surprise that many quarters are doubtful over the findings of the Philippine National Police (PNP) on the Glorietta blast.

“Their lack of credibility on issues involving civil liberties and extrajudicial killings has spilled over other areas of their work. As a law enforcement agency, the PNP has willfully mangled our laws to protect the interest of the Gloria Macapagal Arroyo (GMA) administration. They should not wonder why the public question their findings and consider them politically motivated,” Rosales said.

She added: “The other crater that the blast created is on the credibility of the administration. The issue has shown the level of distrust the people feel towards the government. That the public see the government as one of the suspects behind the blast proves that unless a credible inquiry is done on the explosion, justice would be elusive for the victims.”

“It’s a sign of the erosion of its integrity when the people feel that they could not trust the police to ensure their safety,” Rosales said. “It is karma, and this the cost of their misuse of power and authority.”

She joined the call for an independent inquiry on the blast. “Justice for the victims can only be achieved once the truth behind the blast has surfaced. If we cannot trust on the authorities to present a credible conclusion to this issue, then it is necessary for the government to allow an independent investigation on the blast.”

In a ritual calling for justice for the victims of the blast, Rosales, along with school teachers from Makati City, appealed to authorities to hasten the investigation on the blast. “We owe the families and friends of the explosion a quick resolution on the issue. This is the only way we could lessen their misery,” Rosales said.

AMIN (Anak Mindanao) Party List strongly condemns the bomb attack at the Glorietta Mall causing the death of 9 people and the injury of a hundred others. Amidst initial reports that a C4 bomb was used, we call for a thorough investigation of the blast. Speculations that it is "terror attack" must not be readily accepted. We fear that in the haste to solve the case, this latest incident will just be attributed to alleged terror groups, resulting to indiscriminate arrest of civilians, the usual suspects of whom are Muslims and Mindanaoans.

Further, let it not be discounted that this incident may be a diversionary tactic of the Arroyo administration amidst the series of controversies and the renewed calls for Gloria Macapagal Arroyo's resignation and impeachment. The Gloria Macapagal Arroyo (GMA) administration tried to divert the public's attention from all these issues by once again bringing up the issue of Charter Change or Cha-Cha, but failed. It is not remote that this incident might be used for political ends ensuring GMA's hold to power.

We therefore call on every Filipino to stand united and be vigilant against threats to our peace, freedom and democracy. Terrorism as a tactic used for whatever end has no place in a civilized society and must be condemned. We shall not let those with evil designs take away our freedom. And lastly, while we call for justice to all the victims, let us offer our prayers, support and sympathy to the families of those who perished in the Glorietta blast.

Glorietta bombing in the Philippines: A “Wag the Dog” Scenario

The Partido ng Manggagawa (PM) condoles with victims of the blast at the Glorietta 2 mall and warns the official investigators against a cover up of the suspected bombing incident. PM does not advocate terrorism as a form of protest for as the Glorietta blast illustrates many of the dead and wounded were mall employees doing their job and office workers taking their lunch.

The circumstances and timing of the Glorietta blast makes us suspect that it is politically motivated with allies rather than enemies of the Gloria Macapagal-Arroyo regime probably involved. On the day of the blast, three vocal Catholic bishops called for the resignation of Gloria Macapagal-Arroyo while the Makati Business Club and the Philippine Chamber of Commerce and Industry demanded an inquiry into allegations of bribery by Malacanang. Also on Monday, House of Representatives Speaker Joe de Venecia is expected to appeal for the government to “shape up or ship out.”

The Glorietta blast falls into a “wag the dog” scenario and is meant to deflect attention from fresh scandals rocking the regime and steal the thunder from new calls for Gloria Macapagal-Arroyo’s resignation. There is no lack of partisans of the administration who are rogue enough for such a brutal terror action as the Glorietta blast. With Norberto Gonzales as national security adviser, nobody is secure.

We call on the workers and people not to surrender to masterminds of the apparent bombing and to resist any attempts to further restrict civil liberties in its wake. In the coming days, PM will push through with protests by the urban poor against the rash of demolitions and by workers against contractualization and other ravages of globalization. ###