Next Saturday 24th noon at Southbank, at the bottom end of Jubilee Gardens, we´ll gather to honour the memory of Carlos, an antifascist who was killed two weeks ago by a nazi in Madrid. 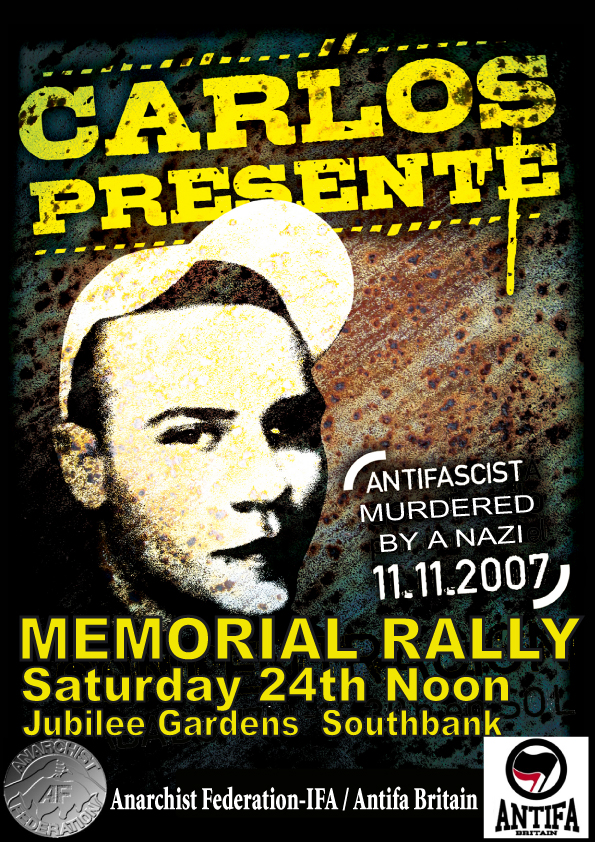 On November the 11th a nazi party had called a demonstration against inmigrants in a working class area of Madrid, a neighbourhood where workers from many parts of the wolrd live. This racist provocation had been authorised by the government. To protest against this, many antifascists gathered to defend the area. While on his way there, Carlos was stabbed in the heart by a nazi with a hunting knife. He bleed to death on an underground platform. He was sixteen. Another friend of him, Alex, was also stabbed and his recovering in hospital to a chest wound.
Only in the last week there were up to five fascist and nazi demos in Madrid, four of which had been authorised by the governement. The antifascist platform had called for one on the 24th which has been banned. On that same day, we will gather to honour the memory of our comrade Carlos, and to protest the criminalisation of the antifascist movement by the spanish authorities and the media.

On Monday the 26th of November, BNP leader Nick Griffin and proffesional holocaust denier (and discredited historian) David Irving will be giving a talk in Oxford.
There will be a demo outside the Oxford Union (see their website for directions) starting at 7pm.
Last week, Carlo, a young anti-fascist was killed in action by a nazi in Madrid. Solidarity demos have been taking place all over Europe. Lets remember him by getting down to Oxford and forming a strong and militant anti-fascist presence to let these murdering nazi bastrads know how we feel about Carlos death!
See you there.

P.S in a previous post, anti-fascist comrades from Oxford expressed a desire to form a strong anti-fascist bloc, so lets get down there!