Burma solidarity: TOTAL ‘given the boot’ at Wembley

Three activists braved the rain to stage a demo at a TOTAL petrol station near Wembley Stadium on Wednesday evening (21st November 2007), before the England v Croatia football match, to highlight the company’s ongoing support for the military dictatorship in Burma. 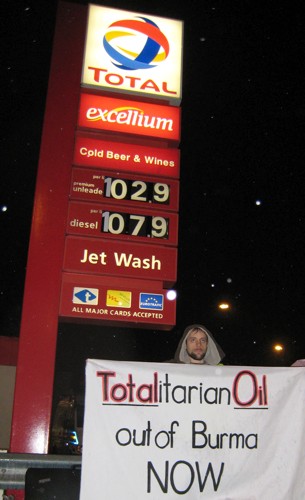 Two people held up a banner reading “TOTALitarian Oil Out of Burma NOW”; whilst another circled around the perimeter of the garage, holding up a large placard featuring a machine gun, reading “TOTALitarian Oil – fuelling the oppression in Burma”. Their protest aroused the curiosity of the throngs of England and Croatia football fans who had gathered near Wembley Park tube for their teams’ final Euro 2008 qualifier, as well as passing motorists. The demonstration passed off peacefully, lasting around 1 ½ hours. Police were in the area, but did not approach the protesters.

The weekly demo at TOTAL’s head office at 33 Cavendish Square, near Oxford Circus - ongoing for nearly two months now - also took place as usual that morning, with some of the protesters continuing on to the daily lunchtime demo outside the Burmese embassy in Mayfair, attended by around a dozen people, mostly Burmese.

The purpose of the demonstrations is to highlight French company TOTAL’s continued involvement with Burma’s oppressive military regime. This is opposed by the country’s democracy leader Aung San Suu Kyi, under house arrest for the past 12 years. The regime is thought to earn hundreds of millions of pounds annually from TOTAL, the fourth largest oil company in the world, due to its operation of the Yadana natural gas pipeline to Thailand. It is thought that France continues to block tough EU and UN sanctions against foreign investment in Burma under the military junta because of a desire to protect the interests of TOTAL.

One of the Wembley protesters commented: “I feel for the Buddhist monks and ordinary people of Burma. They have again peacefully risen up against their oppressors after over four decades in power; yet to date there seems to be little improvement, despite the immense courage they have shown. The world mustn’t forget their plight.

“Despite spurious arguments defending the position of companies like TOTAL and Chevron/Texaco, I personally find it unacceptable for foreign companies to continue to profit from this brutal regime so long as it continues to defy the will of its own people and the international community, which demand as a minimum basic human rights and respect for the democratic process.”

The regular Thursday evening demo at the Total garage near Baker St tube station will continue this week (5-7pm, Dorset House, corner of Marylebone Rd (north side) and Gloucester Place).

This weekend (Saturday 24th November) will see a National Day of Action against TOTAL, supported by Burma Campaign UK, with protests set to take place at TOTAL garages all around the UK.

Total out of Burma blog