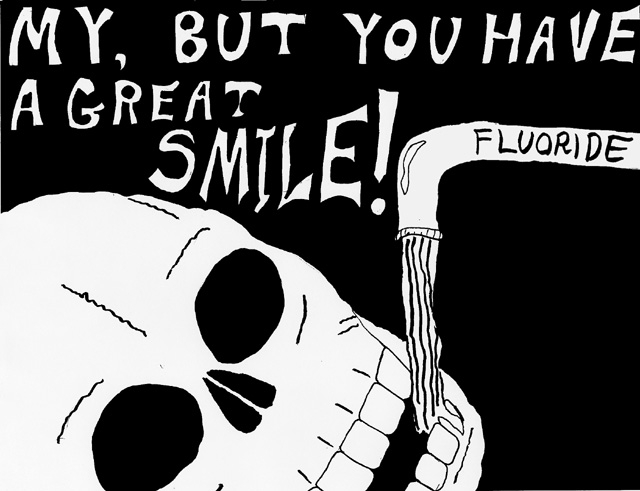 Absorption and concentration in tissues
In the body, fluorine is readily absorbed. Fluorine concentrates in the same tissues where calcium is found in the largest amounts; especially the bones and teeth. In teeth, fluorine combines with the inorganic compound apatite to form a harder, less water-soluble fluoride salt called fluoroapatite. A pregnant mother's fluorine intake affects the amount of fluorine found in the primary teeth that develop in her fetus.

The U.S. National Academy of Sciences and the World Health Organization have published information that fluoride inhibits enzymes at levels of 1 ppm or less. The target level of fluoride in drinking water is 1 ppm.

Thickens but weakens bones
In the early 1980's it was discovered that fluorine will stimulate new bone growth. "Therapeutic" doses (30-60 mg/day for 3 years) were given to elderly subjects with osteoporosis. It reduced the incidence of fractures if adequate amounts of calcium were also supplied. Frequent side effects included frequent gastric irritation and nausea. Sometime, the patient developed painful bone deformations.
[JAMA 243:466, 1980]

This was good news until they started discovering the dark side of the therapy. The bones may get thicker but they become more brittle or developed bone spurs.

European doctors still often prescribe fluoride to women with thin bones. High fluorine areas have a lower incidence of osteoporosis. By increasing fluorine intake, some elderly nursing home patients show a reduced excretion of calcium, improved bone density and alleviation of osteoporosis symptoms. One source speculates that hardening of the inner bone structure of the ear may prevent some hearing loss in the elderly.

In four separate studies, increased hip fracture rates is linked to fluoride in the water. The latest study calculated an 86% increased risk for people over 65 who have been drinking fluorinated water.
[JAMA, 1990-1995]

Genetic damage and cancer
Some researchers believe that fluorine is a carcinogen. Others protest that the results are not yet conclusive. The Argonne National Laboratory reported in 1988 "The ability of fluoride to transform normal cells into cancer cells."

Dr. Takeki Tsutsui and co-workers of the Nippon Dental College in Japan showed that fluoride not only caused genetic damage but was also capable of transforming normal cells into cancer cells.

In one report, the US Government investigated 156 cancer deaths over 3 years. They concluded that fluoride accumulates in body tissues and may eventually cause cancer and/or other fatal illnesses.

Since 1990, the National Cancer Institute, the New Jersey Department of Health, and the Safe Water Foundation all found that the incidence of osteosarcoma (a type of bone cancer) was substantially higher in young men exposed to fluoridated water as compared to those who were not.

A study by Procter and Gamble showed that as little as half the amount of fluoride used to fluoridate public water supplies resulted in a sizable and significant increase in genetic damage.

"In cultured human and rodent cells, the weight of evidence leads to the conclusion that fluoride exposure results in increased chromosome aberrations [genetic damage]". [National Institute of Environmental Health Sciences, 1993]

Immune system and aging
Dr. John Yiamouyiannis estimates that 30,000 - 50,000 people die from flouride poisoning each year. In his book, Fluoride: The Aging Factor, he lists studies describing fluoride's negative effects on the immune system. Many studies have found that people living in fluoridated areas had a decreased migration rate of white blood cells. Other studies describe genetic and chromosomal damage to animals drinking fluoridated water. He warns "Before any disease is even noticeable, the acceleration of the aging process by fluoride is already occurring at the biochemical level, by means of enzyme inhibition, collagen breakdown, genetic damage and/or disruption of the immune system."

Other effects on tissues
People who live in high fluorine areas have a lower rate of calcified aortas than individuals short on fluorine.

Excretion
Flourine is excreted in the urine and sweat.The body can clear up to 3 mg/day of fluorine in this way.

Toxicity
Flouridated tooth products should not be swallowed and should not be used by children under the age of 6. A dentist may recommend a carefully-supervised program for younger children.

Fluorine intake of 20-40 mg/day can inhibit the important enzyme phosphatase. Phosphatase is needed for calcium utilization/metabolism in tissues including the bones and teeth. You can increase your risk of mottling (permanently discolored teeth during tooth development), brittle tooth enamel and bones as well as brain damage.

Fluorine intake of 40-70 mg/day can cause heartburn and pains in the extremities.

Just as flouride will displace calcium in the body, calcium therapies are used to treat flouride toxicity.

Removal / Filtering
A well-made reverse osmosis filter system is able to remove over 90% of dissolved fluoride in drinking water.

Concerned for our health!