A peaceful banner protest organised by Biofuelwatch outside the Climate Investment World Conference at the Victoria Park Plaza Hotel in London today, 27th November led to the organisers moving the venue of the Biofuel Investment seminar session. 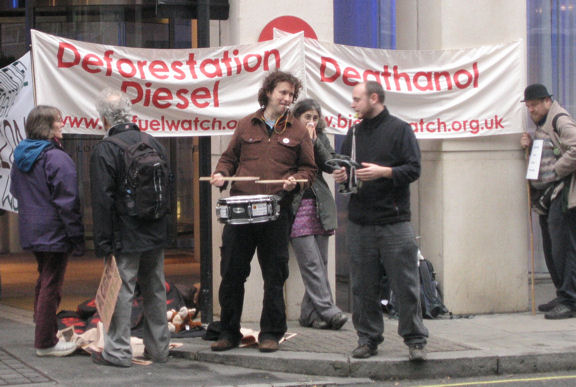 Andrew Boswell from Biofuelwatch says: “The conference organisers ran scared today. Rather than allowing investors to see protestors raising genuine concerns about biofuels – their damaging impacts on people, forest, and climate - they moved the venue. Biofuels are a false ‘solution’ to climate change and it is time government and industry honestly admitted this. “

Last month, UN expert Jean Ziegler called biofuels ‘a crime against humanity’ because they push up food prices and take land away from food production. Mr Zeigler called for a moratorium on biofuel production to prevent a humanitarian catastrophe. The new biofuel investment planned in London today will directly translate into more people going hungry and more small farmers losing their land to big biofuel companies.”

Deepak Rughani adds: “Far from being climate friendly, biofuel monocultures are destroying ecosystems, including rainforests, on which all of us depend for a stable climate. As a result, they are speeding up climate change.”


A recent study by Nobel laureate Paul Crutzen suggests that even biofuels grown in Europe are worse for the climate than fossil fuels. Rapeseed biodiesel, the main biofuel produced in the UK, is linked to up to 70% more greenhouse gas emissions than fossil fuel diesel, because of nitrous oxide emissions from fertiliser use.

Biofuelwatch, who are campaigning for an EU moratorium on large-scale biofuel

production and imports into the EU, say that from April 2008 UK consumers will have no choice about having to buy biofuels at the pump. The biofuels available will be blended from many difference sources across the globe depending on commodity

market prices. This could include biofuels linked to human rights abuses, evictions of local people from their land, deforestation, and massive carbon emissions.

Photos of the protest attached.

We expect a colourful array of banners and placards.

1. Jean Ziegler, Special UN Rapporteur for the Right to Food, called for a 5-year moratorium on biofuel production in a report submitted to the UN General Assembly in October. See:

2. For the study by Paul Crutzen and others about nitrous oxide emissions from biofuel production, see :

3. Over 150 organisations from North and South, including Biofuelwatch, have signed a call for an immediate moratorium on EU incentives for agrofuels, EU imports of agrofuels and EU agroenergy monocultures