The second day of the trial of 2 protestors arrested outside ULU in Malet Street, ended with both defendants being found not guilty by a District Judge. The arrests of a woman and a 14 year old youth followed their attempts to obstruct the civilian cameraman, who was filming people as they arrived for a planning meeting for protests against the DSEi Armsfair which took place at the ExCeL centre in Docklands in September 2007. 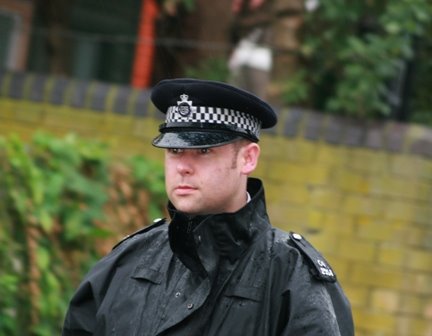 Despite bringing in a senior prosecutor, the CPS were unable to secure any convictions. Both protestors were charged with "obstructing a police contable in the course of his duty", whilst the woman also faced a charge of assult on a PC.

From the time that the Forward Intelligence Team arrived outside ULU in April, the 2 protestors set out to obstruct the camerman who was filming people going into the meeting. They followed him around, and constantly put their banners, which read "No camreas" in front of his lens. This led to a decision to move him onto a set of steps on a building across the road from ULU. 4 officers then formed a cordon across the steps, and the protestors continued to hold the placrds up in front of the camera.

This continued for some time, until people left to attend the meeting. By the time they had crossed the road and entered ULU, both protestors were seized and shortly after , were handcuffed and taken to a police carrier.

A succession of police officers took the stand, and almost every one claimed that the protestors were "BARGING" into the police officers, in order to get at the camera. The officers also echoed the same line about the arrests (neither of which actually took place until the protestors were inside the carrier), claiming that they had grabbed hold of the 14 year old as the 2 were escalating their tactics, and that they feared a breach of the peace. In light of this, 2 officers grabbed hold of the 14 year old, and restrained him using a fair amount of force. When the woman tried to intervene, she too was grabbed and restrained. PC Palfrey who grabbed hold of her claimed that he was kicked whilst restraining the woman.

Ironically, it was FIT's own video which proved to be the undoing of the cops. Whilst all the officers who took the stand presented a unified account of what happened, not one of them was able to show where the actions took place in the video. Furthermore, contrary to the claims that the 2 had escalated their tactics after the others went into the meeting, the video showed the 14 year old standing still and calmly when he was suddenly seized by the 2 officers. The video also showed that it was old favourite Steve Discombe (pictured), who appeared to order the arrest. The video also cast doubt on PC Palfrey's claim of assault.

The prosecution was unable to produce evidence that any police constable was obstructed in the course of their duty, and both defendants openly acknowledged that they had intended to obstruct the civilian cameraman.

A further 2 trials are scheduled to take place at Uxbridge Magistrates Court in the New Year. Both defendants face the "obstructing a PC" charge, even though both defendants were clearly intent on obstructing the civilian cameraman outside the Climate Camp earleir this year. One of the defendants has managed to get the court to agree widespread disclosure.

My guess is that FIT are less than happy this evening.