Climate activists opposed to plans for a third runway at Heathrow this afternoon disrupted a Parliamentary inquiry going on inside the House of Commons.
Protestors from climate action group, Plane Stupid, disrupted the proceedings of the Transport Select Committee who were hearing evidence from BAA boss, Steven Nelson and Aviation Minister, Jim Fitzpatrick. 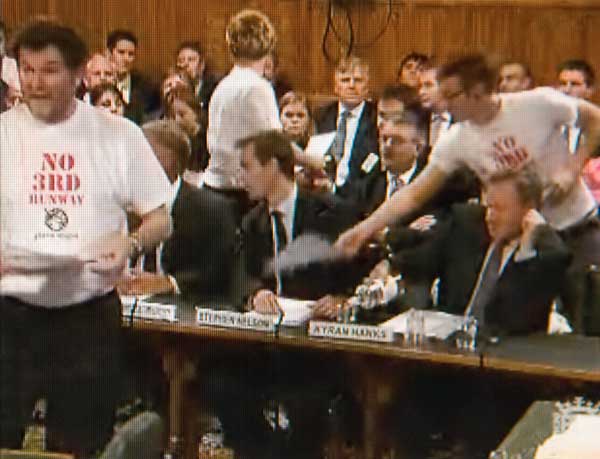 Stephen Nelson turns a blind eye to the Tyndall report.

Articles in the Guardian (below), Indy and Telegraph (below) today. Watch the video at www.planestupid.com
or go directly to

This from the Telegraph: 'Protesters from action group Plane Stupid revealed T-shirts with the slogan "No Third Runway", with one screaming at the BAA boss: "Nelson - the future will judge you." They were removed by police.'

It was covered on Today in Parliament on Radio 4 last night, (but not Yesterday in Parliament oddly), which will be online to hear again I think from the weekend. Can anyone make a recording of it and send me the mp3? I'd be very grateful.

3.15pm - Climate activists opposed to plans for a third runway at Heathrow this afternoon disrupted a Parliamentary inquiry going on inside the House of Commons.
Protestors from climate action group, Plane Stupid, disrupted the proceedings of the Transport Select Committee who were hearing evidence from BAA boss, Steven Nelson and Aviation Minister, Jim Fitzpatrick.

The team of protestors wore t-shirts emblazoned with, “No Third Runway” interrupted the inquiry into “The future of BAA” and handed out copies of a Tyndall Centre climate change report about the impacts of flying on global
warming.

Plane Stupid accuse the Government of pre-judging the decision on the Third Runway and ignoring recent scientific evidence about the impacts airport expansion would bring upon climate change.

“The Government are spinning that they want an open and thorough consultation on expanding Heathrow but they’re ignoring mass opposition and scientists’ warnings and are colluding with BAA to concrete over public debate.”
He added:

“Despite overwhelming evidence of the impact of carbon emissions from aviation - the government are deliberately ignoring concerns about climate change. The plan for a third runway flies in the face of the science and were it approved it would pollute more than the whole of Kenya!”

Campaigners protesting against the construction of a third runway at Heathrow yesterday interrupted the deliberations of MPs investigating the future of the airport's operator, BAA.

They attempted to hand out leaflets to MPs and members of the public crammed into committee room eight of the main parliament building before they were ushered away by police.

BAA is under pressure to improve its performance, especially over the long queues at Heathrow. The Competition Commission is looking at the provision of airport services in the UK. Some have suggested this could lead to BAA, which owns seven airports including Gatwick and Stansted as well as Heathrow, having to sell one of its south-east hubs.

In written evidence to the committee, American Airlines complained that "BAA's mismanagement of its London airports has cost American millions in higher landing fees, reduced operational performance and lost revenue as passengers choose to connect through other European hubs".

In his evidence, Rudd painted a different picture of BAA's finances. The debt incurred by the consortium, led by Spain's Ferrovial, when it bought BAA last year, has led to questions about the financing of investment in its UK airports.

Rudd said: "Capital is available for investment. What I really worry about is the return on capital. All commercial organisations have a choice of where to put their capital. If there is no incentive to invest it is very difficult." He said the consortium was unhappy about the proposal from the Civil Aviation Authority to cut the returns on capital it can make.
----------------------
MPs grill BAA over airport standards

Protesters from action group Plane Stupid revealed T-shirts with the slogan "No Third Runway", with one screaming at the BAA boss: "Nelson - the future will judge you." They were removed by police.

Gwyneth Dunwoody, the committee chairman, dismissed the protest as childish, saying: "If people are so unsure of their arguments that they need to disrupt a select committee, that says everything about their arguments."

The protest followed evidence from three airline customers - American Airlines (AA), British Airways and easyJet - in a hearing on the future of BAA, which owns seven UK airports including the London monopoly of Heathrow, Gatwick and Stansted.
advertisement

"In the last two years BAA has been less responsive over operational issues," he said. "Access to senior management has deteriorated."

Mr Nelson took issue with that but admitted: "I regret the frustration over poor service. We have much to do. We are making progress."

He said BAA's new owner, a consortium controlled by Spanish construction group Ferrovial, had spent an extra £30m to cut security queues and improve cleanliness, while next year's opening of Heathrow's Terminal 5 would ease congestion.

"You can't drag people off the street and put them in a security operation," Mr Nelson said, stressing that BAA had interviewed 35,000 applicants to fill 2,000 security posts after laborious criminal record checks and other tests.

MPs quizzed Sir Nigel over BAA's capability to invest, given that its owner - which bought the group in a highly leveraged £16.3bn deal - has been forced to delay plans to refinance £9bn of debts. Sir Nigel said: "I think they have been surprised and shocked by the reduction of 7.75pc to 6.2pc" - a reference to the regulator's proposed cut in the group's allowed returns at Heathrow.

"The capital is available," he added. "What I worry about is return on capital. I think this sends a terrible message to anyone who is thinking of investing in infrastructure in the UK."

Toby Nicol, easyJet's communications director, called for a review of BAA's regulation by the Civil Aviation Authority, arguing a formula founded on a regulated asset base rewarded poorly targeted spending.

Why else, he said, would BAA be considering handling A380 super-jumbos on a proposed new runway at Stansted when no airline planned to fly them there. "Why are we, the users now, expected to pay for that?"

Paul Ellis, BA's general manager of infrastructure policy, called for the regulator to impose licensing conditions on BAA. "There's clearly not enough teeth in the regulatory process at the moment," he said.