Eight protesters took part in a 2 and a half hour blockade of Sizewell Nuclear plants A & B in response to Gordon Brown's recent announcement on nuclear power. 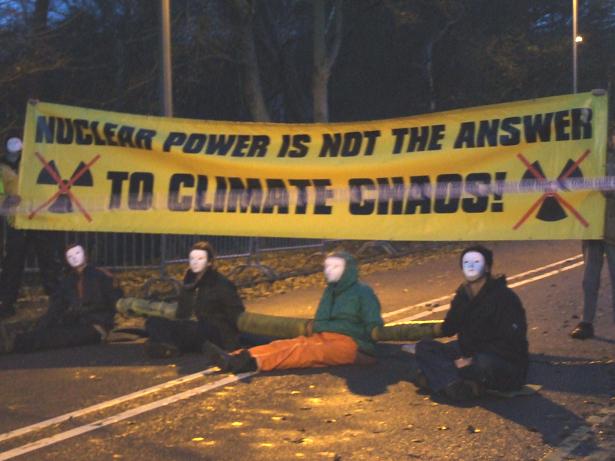 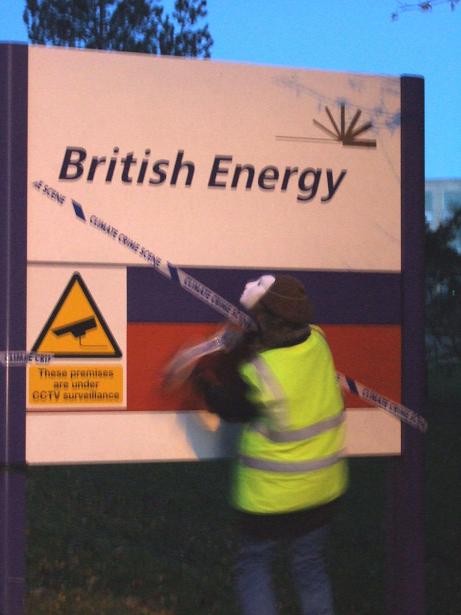 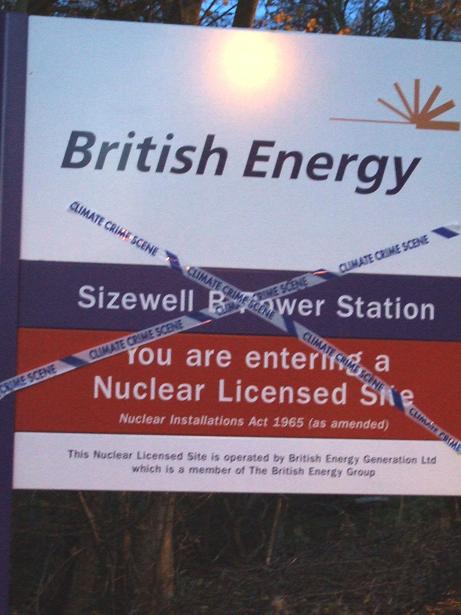 you are entering a nuclear licensed climate crime scene 2 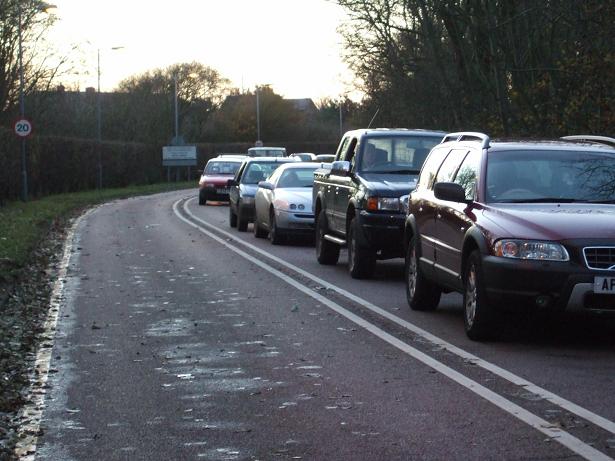 cars queuing to get into Sizewell power station this morning

At 6:50 am this morning 8 sleepy protestors arrived at the gates of Sizewell A and B in Suffolk. What else would you do at this time in the morning at a nuclear power station, other than lay on the road, lock yourselves together, unfurl your banner reading ‘nuclear power is not the answer to climate chaos’ and wait 15 minutes for the security to notice you.
As the shift change began, we lay comfortably on the wet and cold road, and only one worker threatened to run us over.
The griffins arrived (civil nuclear police), Suffolk police, and a couple of gnomes (or maybe security people). Apparently, people wanted to go to work, and so the police asked us to move. We declined.
After 2 and a half hours of shift change disruption (job done!) we made a deal with the coppers that we could leave, with all of our equipment, not get arrested, and be free to come and do it again another day. Bizarrely, the police agreed to this. Watch the video below of what happened just after release – apparently, they couldn’t arrest us under the human rights act – proportionality and all that, innit.

http://www.youtube.com/watch?v=9i7-Z3wdjAM
Interactions with the police

Below is the press release we sent out.


This week it was announced that Sizewell is one of the four sites proposed for the new build of nuclear power plants. Brown indicated that large government incentives for new nuclear stations will be promised in the new year. These would include a planning reform bill that will speed up the planning process. The protesters say that this will take away the ability to refuse permission on a local level and that many safety features were introduced during the extensive planning phase for Sizewell B.
One of the protesters, Peter Lux from Norwich said, “Gordon Browns statement is completely at odds with what we should be doing to combat climate change. The proposed aviation policy with the expansion of Heathrow will cause several times more greenhouse gas emissions than could possibly be saved by replacing our existing nuclear power stations even if nuclear power was carbon neutral which it is not.”
Another protester said: “It is so frustrating to think that we do not even have a democracy when it comes to our energy needs and use. That’s why we have to come and take direct action, how can we sit back and watch when we know this is the wrong route to be taking?.” Said Mell Harrison, one of the protesters and Campaigns Coordinator for Eastern Region CND. She went on “The government are going ahead with building new nuclear power stations without proper public debate and consultation. All you ever hear from the Government is about our growing energy needs, but the real answer is energy conservation and more sustainable life styles. For example we hear about China’s ever growing energy needs, but it’s the West’s desire for more cheap goods from China that is one of the biggest reasons for their carbon emissions.”
Sizewell B was the last nuclear reactor to be built in the UK and was completed in 1995. It took 15 years to complete, cost over £3billion with about £800 million in cost overruns, which resulted mainly from additional safety features.
The nuclear industry also suffered a setback earlier this month when it was announced that the Nuclear Decommissioning Authority was unable able to say what the costs of cleaning up Britain’s nuclear power stations would reach, but last month it raised its estimate by more than 12 per cent to £72.7 billion. This rising cost will be met by the taxpayer rather than the nuclear industry.