For decades the Coca-Cola company has been embroiled in controversy for breaching the basic human rights of its workers and harming the environments in which it operates........ 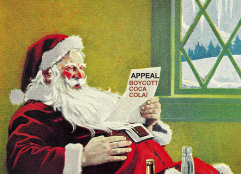 Join Santa in boycotting Coca-Cola, his former employer, this Christmas!

*PLEASE SPREAD WIDELY AMONGST YOUR NETWORKS
*PLEASE SIGN IF YOU AGREE

For decades the Coca-Cola company has been embroiled in controversy for breaching the basic human rights of its workers and harming the environments in which it operates.

For instance, they have paid out hundreds of millions of dollars in lawsuits to settle claims of race discrimination. Disturbing allegations and growing evidence has transpired that it has actively colluded in or just turned a blind eye towards the violent repression of its unionized members in Colombia(1) . Communities and NGO's in India have accused the multi-national giant of water depletion and pollution(2).

As a result of these abuses, many human rights organisations and delegations - including Amnesty International(3) , Human Rights Watch(4) and a fact-finding mission led by a New York City Council member (5) - have appealed to Coca-Cola to better defend their workers 'rights and to radically reduce the damaging environmental fall-out of its factories.

Therefore, it is with great concern that we have learned of the well-respected Polish non-governmental organisation, Polska Akcja Humanitarna’s (PAH)(6) current Christmas campaign with Coca-Cola. While the beverages giant appeals to its drinkers this Christmas to help feed hungry Polish children through PAH’s ‘Wooden Puppet’ programme, the brutal irony exists that children as young as 8 years old work for Coca-Cola’s suppliers in the sugar cane fields of El Salvador(7). Is not their hunger for the universal right to education, and freedom from bonded labour, as equally important to the rights of Polish children?

To promote Coca-Cola as a corporately socially responsible multi-national jeopardizes the lives of workers in and neighbours of Coca-Cola's bottling companies, many of whom are struggling to lead decent lives. We agree with and strive to achieve similar principles to PAH's mission statement, to 'make the world a better place through the alleviation of human suffering and the promotion of humanitarian values.'

Furthermore, we are aware that PAH’s primary mission aspires to “shape humanitarian attitudes among the public and creates a modern culture of mutual help.” However, by associating its humanitarian actions with Coca-Cola, we believe that it compromises the struggles of the thousands who have suffered due to Coke’s malpractices.

Taking all this into consideration, and the ongoing failure of Coca-Cola to take responsibility for grave human rights' transgressions in its bottling plants, we hereby appeal for the Polish Humanitarian Agency to immediately end its collaboration with Coca-Cola on the ‘Wooden Puppet’ and any humanitarian campaign.

We further demand that Coca Cola, who spent $2.6 billion dollars on advertising in 2006(8) , invest its enormous resources in defending the basic human rights of its workers. The many communities adversely affected by its relentless and destructive drive for profit deserve their voices to be heard and their dignity to be upheld.

We appreciate the fact that PAH’s ‘Wooden Puppet’ campaign requires money to be effective, yet we implore PHO to seek alternative sources of funding so as not to compromise its humanitarian values. We are confident that the children who benefit from this food sustenance programme would be shocked if informed about the wide variety of allegations and evidence exposing Coca-Cola’s relationship to human rights’ breaches.

Finally, we invite all members of civil society in Poland, especially the humanitarian workers in Polish Humanitarian Action, to join us in boycotting the hundreds of Coca-Cola products. Our common demands, for Coca-Cola to uphold international labour and human rights’ standards, would be invaluable contributions in aiding the promotion of humanitarian values, as far afield as Colombia and India.

Individuals, groups, societies, collectives are invited to join our appeal for Poland's biggest humanitarian organisation to end their association with Coca-Cola. Please put your signature below or email me at

PLEASE SPREAD WIDELY AMONGST YOUR NETWORKS