http://www.Peakfood.co.uk/ had an article published on pages 10 and 11 of The Yorkshire Post’s Country Week (thanks to Michael Hickling!) It mainly discussed price increases and the threats to future food production. 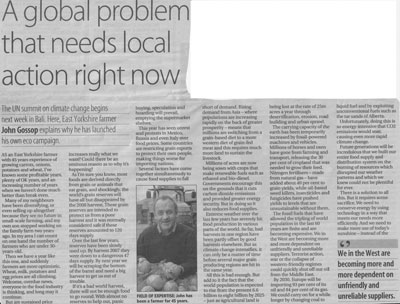 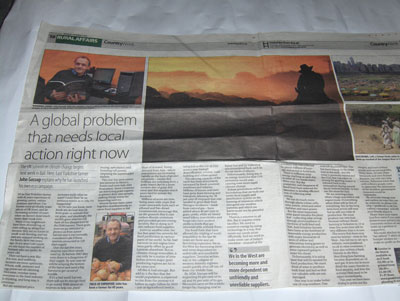 As an East Yorkshire Farmer with 45 years of experience of growing carrots, onions, potatoes and wheat, I’ve known some profitable years, plenty of okay years, and an increasing number of years when we haven’t done much better than break even. Many of my neighbours have been diversifying, or even selling up all together because they see no future in small-scale farming; and my own son stopped working on the family farm two years ago. In my local area I can count on one hand the number of under 30-year-old farmers.

Then we have a year like this one, and suddenly farmers are more optimistic. Wheat, milk, potatoes and egg prices are all climbing. Welcome, overdue news, everyone in the food industry is thinking, and long may it continue.

But are sustained price increases really what we want? Could there be an ominous reason as to why it’s happening?

As I’m sure you know, most foods are derived directly from grain or animals that eat grain, and shockingly, the worlds grain reserves will have all but disappeared by the 2008 harvest. These grain reserves are intended to protect us from a poor harvest and it was normally considered safe if these reserves amounted to 120 days supply. Over the last few years reserves have been slowly used up as each harvest did not quite meet demand until by harvest 2007 they only amounted to a dangerous 47 days supply. By 2008 harvest we will really be scraping the bottom of the barrel and need a big harvest to get us out of trouble. If it’s a bad world harvest, there simply will not be enough food to go around, and with almost no reserves to help out, panic buying, speculation and hoarding will prevail, making a bad situation much worse, emptying the supermarket shelves.

Even this year there has been unrest and protests in countries such as Mexico, Russia and even Italy over food prices. Some countries are restricting grain exports to protect their own people, making things worse for importing nations. If this is happening when there is just enough food to see us through to next harvest, imagine what will happen if next years harvest turns out to be inadequate.

There are several factors coming together at the same time that are causing food supplies to no longer keep up with demand. Firstly, rising demand from Asia where populations are not only still rising rapidly but greater prosperity means that millions of people are changing from a grain based diet to a more western diet with more grain fed meat which needs much more land per person. Secondly, millions of acres of land are now being used to produce renewable fuels such as ethanol and bio diesel. Governments are encouraging these crops in an attempt to reduce carbon dioxide emissions and to increase energy security, but in doing so are reducing food supplies. Thirdly, extreme weather such as droughts and floods have over the last few years hit food production in various parts of the world. So far, bad harvests in one region have been partly offset by good harvests elsewhere, but as climate change intensifies it is only a matter of time before several major grain producing regions are hit in the same year. Lets hope that it is not 2008.

All this is bad enough, but the world population is expected to rise from the present 6.6 billion to 8 billion by 2025 while agricultural land is being lost at the rate of 25 million acres every year through a combination of desertification, erosion, road building and urban sprawl.

These are all ongoing problems but soon we will be faced with a food production problem that unless resolved will cause a large reduction in the worlds population.
The carrying capacity of the earth has been temporarily increased by the use of fossil fuels and the technologies they have powered. By using fossil powered machines and vehicles, we have been able to get rid of the millions of horses and oxen used in farming and transport, thereby releasing the 30% of cropland previously used to grow their feed. Nitrogen fertilisers made from natural gas add about 40% to grain yields and oil based weed killers, insecticides and fungicides have pushed yields to levels that could not be sustained without them.

The supplies of fossil fuels that have allowed the tripling of world population in the last 60 years are of course finite and are becoming expensive. We in the West are becoming more and more dependent on unfriendly and unreliable suppliers and there are many possible scenarios such as terrorist action, war or the collapse of western friendly regimes that could quickly cut supplies from the middle east. Our present system of food production, processing and distribution would collapse without adequate supplies of oil and natural gas . These supplies cannot remain adequate forever and indeed are unlikely to remain adequate for much longer.

By 2030, Europe will be importing 93% of it’s oil and 84% of it’s gas. If it were not for climate change caused by greenhouse gases, we could carry on for a while longer by changing coal to liquid fuel and by exploiting unconventional fuels such as the tar sands of Alberta. Unfortunately, doing this is so energy intensive that CO2 emissions would soar, causing even more rapid climate change.

Future generations will be incredulous that we built our entire food supply and distribution system on a resource that cannot possibly be plentiful for ever and the burning of which is disrupting our weather patterns.

There is a solution to these problems, but it’s not one that can be implemented without some sacrifice. We need to conserve energy by using technology in a way that allows our needs to be met more efficiently, and we need to make more use of present day sunshine instead of the sunshine that was collected by plants millions of years ago and stored as fossil fuels.

There is enough solar energy reaching us each day to meet all our needs many times over, but fossil fuels have been so cheap and plentiful that there has been little incentive to develop highly efficient methods of collecting solar energy. We can collect much more solar energy than we have been doing through technologies such as photo voltaic cells, solar panels, wind and water turbines and wave power. But the most important solar panel will still be the plant leaf, collecting solar energy through photosynthesis in the form of both food and fuel.

Yorkshire farmers have been at the forefront of renewable energy production with many thousands of acres of willow and miscanthus used to generate electricity, as well as some rapeseed going to make bio diesel. The trouble is that this is using land that will in the future be needed for food production, so we need to develop ways to produce both food and fuel in a way that does not damage our valuable soils.

One way to do this is to make better use of crop residues. An example is oilseed rape which has more energy in the straw than in the seed, but the straw is presently wasted and the CO2 that was taken in during the growing season is released back to the atmosphere during natural decay without benefit. If we use the straw for fuel, only that same amount of CO2 is released during burning.

We are entering a time when a huge population will expect more of everything when there will be less of everything. Yes, in the long term food prices will soar, but so will our costs of production. We must produce our own fuel, because without diesel, farming in Yorkshire in 10 or even 5 years time will be very different than it is now.

The worry that there may soon be famine - even in the west - led me to set up the web site, www.peakfood.co.uk to raise awareness. My book, Famine in the West, describes how farming became dependent on oil and gas, gives more detail on the many threats to food security, and lists the actions I feel need to be taken immediately. It is available as an E book (£2.99) or in printed form (£6.49 + £1.49 UK P+ P) from www.peakfood.co.uk.