G-Star on their knees

The Dutch jeans label G-Star has broken ties with the discredited Indian manufacturer Fibers and Fabrics International (FFI). The manufacturer is accused of violation of the labor laws. Human rights organizations who have been campaigning against G-Star respond that they are pleased. 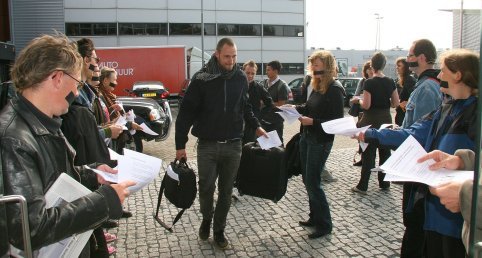 G-Star has cut links with its Indian supplier FFI. The Dutch jeans label felt compelled to do so by the publicity about the poor working conditions in the manufacturer of clothing.

For the last year the Clean clothes campaign (SKK) and the National Working India (LIW) Action have been campaigning at G-Star to stop them getting more clothes from FFI making the connection with the poor working conditions. For example, employees in the Indian manufacturer must do overtime without recompense and they are not allowed to organize in unions.

According to G-Star international investigations showed that the working conditions in FFI meet internationally accepted standards. The company says, however, they are caught in an impossible dilemma on the one hand concerned about the future of the entrepreneurs of the factory in Bangalore and on the other the continuing bad publicity as a result of the activists campaign.

The Clean Clothes Campaign and the National Working India, both longer involved in campaigning about working conditions in the factory, respond positively to the decision by G-Star. But they want to know what will happen to workers at the factory. They are of the view that G-Star is partly responsible for the workers who make its products and believe that G-Star should use a responsible "exit strategy".

The international arrest warrants and the lawsuit against the eight employees of the SKK, LIW and Internet Antenna have not been dropped with the withdrawal of G-Star. The extradition request and the lawsuit creates still creates a dangerous precedent for all NGOs active in the field of human rights in India.

"It is therefore very important that while G-Star handles its last order with FFI it gets a commitment to remove the extradition and the trials," says Gerard Oonk of LIW. In the meantime The Netherlands is trying quiet diplomacy on India to push for the withdrawal of the arrest warrant, and will not extradite the eight. The eight are accused of defamation by an Indian clothing manufacturer for reporting the abuses that were made.