Amidst an apparent blackout of world corporate media, Indymedia Scotland has learned that the NATO meeting will take place on the 14th of December, at Craigiehall. The meeting will be attended by defence ministers from 8 NATO countries, and other senior political and military officials who will be discussing the current situation in Afghanistan. This is the summit they wanted to keep secret.

a PDF of the MOD press release - application/pdf 49K 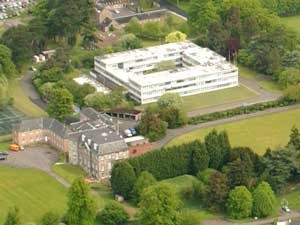 The location of the NATO summit

UK Defence Secretary Des Browne, and the new foreign office minister for Africa, Asia and the UN Lord Malloch-Brown, will be hosting the meeting of defence and foreign ministers from the eight countries involved in the American imperialism in Afghanistan. All the countries that have troops in southern Afghanistan. the Urzugan, Helmad and Kandahar provinces, will be represented at the NATO event. Countries likely to attend are UK, US, Germany, Canada, Australia, Netherlands, Denmark, Estonia and Romania. Defence Secretary Gates will be attending, as will Joel Fitzgibbons the new Australian minister of defence (1).

The date and time of the event was discovered after several days of investigation by Indymedia Scotland, after finding corporate media reports indicating that NATO will be meeting in Edinburgh some time this month, and in others that it will be next week (2). A press release with the embargo "not for publication or broadcast before 0001 hours Friday 14 Dec 2007" was discovered on the Google cache for a Polish newswire (3), containing all the details of the event at Craigiehall.
This is a significant leak, since it is certain that many important political and military figures will be attending the event, and will represent a security issue for the NATO meeting: however Indymedia Scotland believe that we have a right to be aware of, and to protest at such events to make our voices and opinions heard.

The NATO event will begins at 10am British Army Headquarters, 2nd Division, Craigiehall, Edinburgh(4), with press advised to arrive at 8.45am.

http://www.guardian.co.uk/guardianpolitics/story/0,,2221998,00.html" while the Scotsman and Herald reports it as being 'this month' "

Protest NATO! - details of the demonstration

We want to make our voice heard, and make our opinions known, at the NATO summit they tried to keep secret!

Below are initial details of the peaceful protest being planned for the Edinburgh NATO meeting on Afghanistan, an event that will take place on the morning of the 14th of December.

This article will be updated, as plans and details emerge, so check it fairly often.