The Tide Is Rising

A banner reading: 'THE TIDE IS RISING' with a blue wave across it now welcomes all those entering the city of Manchester on the Princess parkway. This marks the beginning of a number of Climate campaigns this weekend. 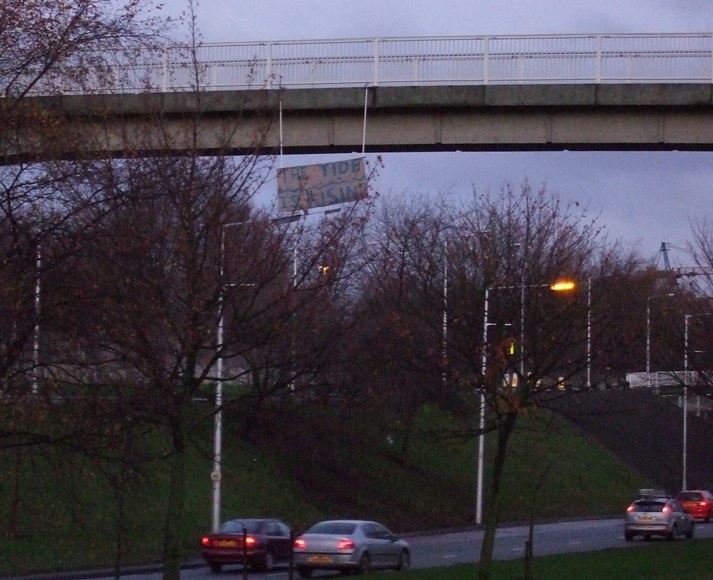 A banner reading: 'THE TIDE IS RISING' with a blue wave across it now welcomes all those entering the city of Manchester on the Princess parkway. This marks the beginning of a number of Climate campaigns this weekend.


In the early hours of this morning (Friday 7th Dec 2007) activists dropped a banner from the pedestrian bridge near Hulme. It was still there at eleven twenty and, as far as we know, remains hanging at this moment.

Sea levels may well rise by 6 metres if the worst reports come true. The 8th December is the international day for Climate Change. Whether you're in London, Manchester or any where, you can join the tide for change. Use ribbons, chalk, or anything non toxic to mark a symbolic tide line, 1 metre above the ground on trees, fences or any other places this weekend. Let's make facing this urgent problem unavoidable.

Fred Pearce in his most recent book 'The last generation' has sighted a number of alarming reports from scientists in both the Artic and Antarctic that state ice is melting at an experiential rate.
If these reports are right we have passed an irreversible tipping point making sea level rises imminent (in some reports as much as 6 Metres).

Action needs to be taken from the grass roots level to the top.

what a hero you are! ypu dropped a banner! what a radical activism!gee!

what a hero you are! ypu posted a comment on indymedia! what a radical activism!gee!

'Action' by the Metro

To get a message like this accross now it seems that you don't have to risk arrest etc. Last week the Metro projected a huge Blue line on to Battersea Power Station with the text '2030?', they also projected it on to other buildings and gave half of a page to showing this in the Metro newspaper.

I think it's interesting that mainstream institutions, politicians and scientists are all saying climate change is serious- maybe it's down to the success of green radicals- but surely now it's time for the green radicals to say something else, develop their arguments and critique? what i mean is, everyone is saying 'climate change is bad', so it's not the job of radical greens to say the same but maybe to highlight why people are talking without acting, what's stopping them? could it be something to do with that old cliche 'the system'?....

its great to see such an active group x